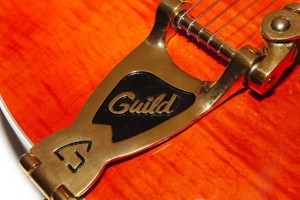 While most people associate the name Guild with beautiful vintage and modern acoustic guitars, Guild electric guitars are also wonderful examples of fine US-made instruments. I’ve owned more than a few, and it all started for me 30 years ago.

Back in the halcyon days of the very early 80’s, I took my 17-year-old self into a local music store and bought the guitar that I had been lusting after for a year. It was a Guild S300A-D, and it was the coolest looking guitar I’d ever seen. Had I enjoyed the gift of prescience, I would have probably bought the old Gibson 1959 Les Paul in the store across town, but that was just dumb old guitar – this thing was the future! Fast forward 30 years and the Guild S300A-D is worth what I paid for it – about $1000. Not bad. That Gibson though, in good condition might fetch a cool quarter of a million dollars. Ah the decisions of our youth.

If you’d like to learn more about Guild electric guitars or your looking for detail about a specific model, check out my gadguilds.com site where I review many Guild electrics from the ’70s up until today. There are also technical articles, amp reviews and more.

That Guild electric was my sole guitar for 30 years. and it would shape my guitar buying decisions later in life. Why? Because it was a magnificent instrument. Over the years I played in bands covering classic rock, hair metal, rockabilly and even jazz (though admittedly not very well). The Guild could keep up with it all. In the 30 years that I owned it, I never once had to use the truss rod to adjust the neck. The only problem I ever had with it had to do with the Dimarzio pickups. They started squealing in the late 80s, but only at loud volume, which as my aging hearing will attest, was all the damn time.

After the turn of the century (God I feel old saying that), children came into our lives and my guitar habit waned. The Guild sat in the closet for years until I got on a “get rid of stuff I don’t use binge” wherein I sold my beloved Guild to someone who offered me $1000 for it. For about a year I was OK with the decision until I got the bug to start playing again, and my mistake started to weigh heavily on me. I offered to buy my guitar back, but the new owner wasn’t willing to sell. I went on a hunt to find a replacement and found one in even better condition on eBay. It wasn’t *my* guitar, but it was as close as I would ever come.

Anyone who plays guitar will likely tell you that they suffer from a condition colloquially known as GAS, or Gear Acquisition Syndrome. I too suffer, or rather my wallet does, from this affliction. While GAS is a troublesome disease, it is made worse when a certain brand of guitar if favored. In my case, loving Guild guitars was a problem, one that could only be solved by owning more Guild guitars. The cycle had begun.

Just before I bought my Guild S300A-D back in 1980, a good friend of mine had bought a Guild Starfire IV. It was a beautiful instrument that matched my Guild with its beautiful blond finish. I decided that I wanted one. I scoured the Internet until I found the perfect guitar – a 1999 Guild Starfire 4.

That Starfire was a magnificent instrument, but it didn’t nail that vintage Guild sound that I remembered from my friends guitar. I attributed this not only the age of the wood, but the pickups in the guitar. They looked like the same pickups, but as I would come to learn, they were cheap imitations.

In my quest for that vintage Guild sound, I found an almost mint 1973 version with vintage Guild HB1 humbuckers, a master volume, harp taipiece and beautiful block inlays. That guitar had the sound I was looking for, but those old Guilds have really skinny necks, and I have really big hands, so it just wasn’t meant to be. I then bought another vintage Guild, this time from 1976, and made of mahogany. The guitar sounded even better than the ’73, and the neck was a little deeper, but it was still to small for my hands. I sold off the vintage Guilds and kept the 1999 version because the neck was just perfect for me.

On these late-year Guilds, Fender (who still owns Guild) replaced the pickups with a Fender-made version of the HB1. Honestly it’s not a very good pickup, so I had them rewound by a boutique pickup winder and now the guitar sounds pretty darn sweet. With the right pickups, these guitars are, in my opinion, better and more consistent than 95% of the ES-335s out there.

Somewhere in life I fell in love with the music of Brian Setzer. Of course listening to the Stray Cats and the Brian Setzer Orchestra made me lust for an Orange Gretsch, and that’s when I found a relatively rare gem in the Guild lineup: The Guild X170T. The Guild X170T is an X170 jazz guitar outfitted with a Guild-labeled Bigsby tremolo (nicknamed the Guildsby by Guild aficionados), a coil tap switch that splits both humbuckers, gold trim, and a hot Tennessee Orange finish. I knew the minute I saw it that I had to have one.

This orange guitar plays like a dream, and offers up a nice variety of tones when using the coil tap switch. To my knowledge only about 400 of them were made, and I manage to score a pretty mint copy, again from eBay. I’ve even been known to play some Stray Cats for my adoring fans, all of whom are between the ages of 9 and 11. 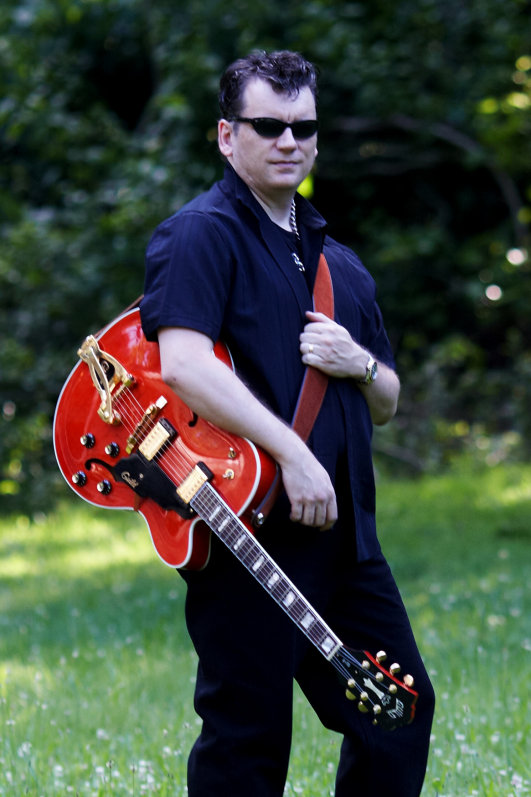 The guitar can keep up with anything I throw at it, but it has one failing – those same boring Fender psuedo-HB1 pickups. At some point I’ll likely replace the pickups, and I’m tempted to put TV Jones classics in there to make it sound more like a Gretsch. I’m not a fan of altering a guitar to make it something it’s not, and I’d likely just buy a Gretsch and reserve this guitar for Jazz duties, though it’s a bit flashy for jazz in my opinion. Time will tell. Of all my Guilds though, this one is a favorite because it’s just so much fun to play. Ask my kids which guitar they like the most and they’ll usually reply “The orange one!” It’s just a fun guitar.

After the joy of owning a Guildsby-equipped X170T, I found that my Starfire 4 was getting lonely. When I played it, I adored the sound, but the lack of a Guildsby made it less fun for the music I was playing. For 30 years I had never had a guitar with a tremolo bar, and now I was missing it.  Oh, and for the record, I know it’s really a vibrato, but Leo Fender called it a Tremolo in the 1950s and we’ve all blindly repeated the mistake ever since. Regardless of what the whammy bar is technically called,  there was only one thing to for me to do in order to get one on a Starfire — find a Starfire III.

Starfire I: Very early 1960’s Stafires that came with only a neck pickup.

Starfire III: Same as SFII, but with a Guildsby vibrato tailpiece

Starfire V: Same as SFIV, but with a Guildsby vibrato tailpiece

Back on Ebay I found a local musician who was selling a mahogany Starfire III from 1997 in mint condition. I made a trade, jumped on the chance and scored another Guild Electric Guitar.

I love mahogany electric guitars, and this one was no slouch. I discovered that this one had a little something extra to the sound though compared with my 1999 SFIV and X170T. Around the time this guitar was made, Fender hadn’t yet mucked with the HB1 design, and instead had put Semour Duncan pickups called SD1s into old HB1 covers. These SD1 pickups are much better than the later Fender psuedo-HB1s. If you’re hunting for a Guild from the late 90s, you would do well to try and get one with the SD1 pickups because they sound significantly better than the Fender HB1s found in the late 1990s and early 2000s models.

One of the things you immediately notice when you pick up a Starfire II or Starfire III is the weight. They’ve very light, especially if you’re used to a nine-pound guitar like a Les Paul. Without the center block of the Starfire IV or the additional thickness of the X170, the Starfire III is a featherweight. This guitar will play every ounce of smokey blues tone you can pull from it, will play great jazz clean tones, and will rock loud and proud with the best of them. The only downside of this guitar is that the fully hollow body will feed back at the slightest provocation. If you’re clever you can turn that tendency into some great feedback/sustain tricks, but if that is a skill you can’t seem to master, this guitar might be frustrating at loud volumes. Just keep your hands on the strings when you’re not playing, or better yet roll the volume off, and you’ll minimize the problem. The trouble of dealing with feedback is well worth it given the fun and variety of sounds you can get from this guitar.

In addition to the pickup difference I’ve mentioned, there are some differences between the vintage guild electric guitars and the modern “reissue” Guild electrics that are worth noting. The reissues are from the mid to late 1990s. The vintage Guilds I’ve seen range from the 1950s to the 1980s. Speaking mostly about the Starfires, the biggest differences in my experience are:

Many of the other Guild electrics changed over the years. I couldn’t begin to list or know them all, and would instead refer you to Hans Moust, author of The Guild Guitar Book. See the last paragraph for more information. He’s a busy guy though, so please be conscious of that fact if you decide to contact him.

Over the years I have owned nine different Guild electric guitars. Every one has been a fantastic guitar. Even better, none of them cost me more than $1,200 – even the vintage ones! That’s right, you can get a vintage Guild Starfire IV that rivals a vintage ES-335 in tone for only a little over $1000. I’ve even seen them go for $800 on eBay. Try to find a vintage ES-335 for that price. I bet the vintage Guild is a nicer guitar anyway.

All of this information is based on my observations from the guitars that I’ve owned. I’ve also learned a great deal from the folks on the LetsTalkGuild.com forums, and I would be remiss if I didn’t tell you to go find a copy of Hans Moust’s excellent book The Guild Guitar Book. Word is that Hans is working on a new book that covers the modern era of Guild guitars including the ones I’ve written about above. I for one, can’t wait to get my hands on a copy! In the meantime I’ll be scouring the Internet for used Guild electrics.

If you liked this article, please visit GADsGuilds.com for far more detailed articles about various Guild guitars, amps, and everything else Guild.