According to typingtest.com, the average speed from some 15,000 people tested is 36 words per minute. Five years ago my typing speed was probably half that, and that speed was only a result of sitting at a keyboard eight hours a day for 25 years. It was simply repetitive use of a tool that led me to be barely proficient with its use.  So how did I improve my typing speed so dramatically?

I can type at around 65 words per minute when copying text from another source (as tested on typingtest.com). I can type at almost twice that speed when typing out my own stream of consciousness. In fact I can type so fast that my thoughts are often the bottleneck to my writing, not my typing. I long ago gave up writing anything but immediate notes by hand since my typing speed far outpaces my ability to write in either cursive or block printing. I love to write with a fountain pen, and have a nice collection of them, but I’m so slow that I rarely do it anymore.

The way in which I learned how to type so fast was simple, though it did cost me about $130. I don’t type properly, but I do type quickly. Here’s the secret:

Stop looking at the keys.

I know, everyone says that, and I’m sure if you’ve ever tried to type faster you’ve forced yourself to stop looking at the keys, but how long did that last? A day? An hour? It’s hard to change habits by choice, especially when all you get from the habit is the ability to type faster. That never worked for me. I needed something to help me learn the keyboard so well that I wouldn’t NEED to look at it. Here’s where it gets interesting, and where the $130 comes into play:

Buy a keyboard without any letters on it.

I’m here to tell you that it’s not dumb, and yes, there are keyboards without letters on them. My favorite? The Das Keyboard from https://www.daskeyboard.com/. I have two of these fantastic keyboards, and I attribute my fast typing skills to their use. Yes, you could accomplish the same thing by putting stickers on your keys, but stickers are distracting and easily removed. Once you get frustrated, you’ll probably just peel the stickers off anyway. I know I did.

Now I will warn you that the first month or so with an unlabeled keyboard is a terribly frustrating experience. To force this behavior modification, I installed my unlabeled keyboard as I began writing my first published book, Network Warrior. This book is over 600 pages in its final form, and I easily wrote 800 pages including everything that was cut. For 15 months I wrote, re-wrote, edited and finalized the entire book using the Das Keyboard unlabeled keyboard.

I’ll be honest. For the first couple of days my typing speed probably dropped to about five words per hour. Slowly though I came to realize that I did know where the keys were – I just didn’t believe that I knew where they were. I discovered this a couple of weeks into my experiment when one of the kids started talking to me while I was typing. I turned my head to talk to them and they commented, “That’s so cool that you can type without looking!” As soon as I realized that I was indeed typing without looking, my fingers tripped all over themselves and all typing stopped. If I tried to type without looking I couldn’t do it. If I distracted myself somehow and didn’t think about typing, my fingers flew. I felt like Arthur Dent trying to learn how to fly in The Hitchiker’s Guide to the Galaxy.

The Hitchhiker’s Guide to the Galaxy has this to say on the subject of flying.  There is an art, it says, or, rather, a knack to flying.  The knack lies in learning how to throw yourself at the ground and miss.  Pick a nice day, it suggests, and try it.

One problem is that you have to miss the ground accidentally.  It’s no good deliberately intending to miss the ground because you won’t.  You have to have your attention suddenly distracted by something else when you’re halfway there, so that you are no longer thinking about falling, or about the ground or about how much it’s going to hurt if you fail to miss it.

Just as I started to feel comfortable, performing keystrokes such as Control-F would halt me in my tracks. Passwords would also confuse me. For some reason typing words was easy. Typing a string of random letters and numbers was difficult. Still I persevered, and as the weeks past, I found myself no longer looking at the keyboard when I typed even complex passwords. I quickly discovered that I actually typed slower when I looked at the keyboard! Without the crutch of being able to visually hunt and peck, my typing speed soared. 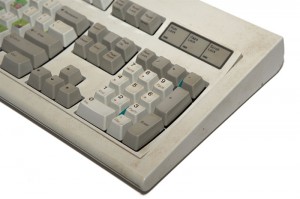 The Das Keyboard comes in labeled and unlabeled versions, and now also comes in clicky and silent versions. I love a keyboard with solid tactile feedback and before my Das Keyboard, was still using my aging IBM AT keyboard – the original 101-key heavyweight monstrosity that I aquired in 1984. The Das Keyboard was the first keyboard that felt good enough to let me retire my trusty IBM. Modern computers like Macs don’t have clunky old keyboard connectors on them anymore, so I can’t easily use it anyway. My kids used to bang on the old IBM when they were little. Even after toddler abuse and a SpongeBob sticker assault, it still works perfectly after almost 30 years.

The Das Keyboard is not inexpensive at $129.00 ($135.00 for the silent models), but it is worth every penny. I’m working on my third book right now on the same Das Keyboard. With those books combined with my daily writing, emails and other typing chores, I estimate that I’ve put in at least a half a million words on my original unlabeled Das Keyboard, and it’s still hasn’t showed any signs of wear other than some crumbs between the keys. I can’t blame the keyboard for my sloppy eating habits though. 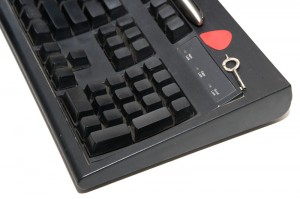 My Das Keyboards are older models than the ones pictured above. Some of the features found on the newer models include a two-port USB hub and blue LEDs instead of green. One of the things I like better on the older models is the little shelf on the top of the keyboard like the old IBM keyboards had. This allows me to pile all sorts of useless crap on my keyboard which should really be somewhere else.  The newer Das Keyboards do away with the shelf in favor of a sleeker design with a smaller footprint. They still haven’t found a solution for the crumbs though.

I should mention that the Das Keyboard’s only drawback is that it is still shaped like a traditional keyboard. After elbow surgery I tried various split keyboards, I tried to learn the Dvorak method and I even tried one-hand chording keyboards. None of them worked for me. If your primary concern is repetitive strain injuries, then using a traditional keyboard like the Das Keyboard might not be the best solution for you. The split keyboards didn’t work for me because I don’t properly touch-type and wasn’t willing to learn how. What can I say, I’m a stubborn old nerd.

There are two primary ways in which you interact with your computer – with your eyes, and with your fingers. Sure you also listen, and if something has gone horribly wrong you might smell your computer, but the primary interfaces between you and your computer are through the monitor, keyboard and mouse. My advise is to buy the absolute best and most comfortable of each, especially if you spend many hours a day at the computer like I do. In the case of the Das Keyboard, you can get a great, well built keyboard that could also help you to type faster.

Now to be perfectly fair, I type a lot. As a writer, I write more than the average person does, and this helped to accelerate my increase in typing speed. Still, the change in my speed was so dramatic, once I finally stopped looking at the keyboard, that I still recommend an unlabeled keyboard to anyone who is looking to type faster.

One undocumented feature of the unlabeled Das Keyboard is that it stops people cold when they try to use your computer. Since most people can’t handle unlabeled keys, they usually look at the keyboard, utter profanities and leave. That doesn’t help you type any faster, but it does help to keep people from using your stuff. I like that feature – a lot.

2 thoughts on “How To Type Faster”