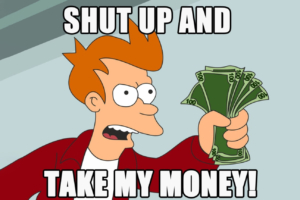 There are some Guild items that I’d like to get my hands on, so I thought I’d list them all in one place and let the magic of the Internet do the rest. If you’ve got any of these items, please contact me or leave a comment with your details and I’ll get right back to you.

All of these are Wanted to Buy listings, but if you’d be willing to let me borrow your uber-rare Guild guitar or buy it with a sell-back agreement so that I can photograph them (inside and out) for my reviews, I’d be open to that as well.

Please not that I’m willing to pay fair prices, not crazy prices. Just because there’s a shop in Japan listing a Guild Foxey Lady for $1500 does not mean I’ll pay that much.

Almost all pics have been shamelessly stolen from various Reverb and Ebay posts. I’d use my own pics, but I – you know – don’t own any of these items. That’s sort of the point, after all. 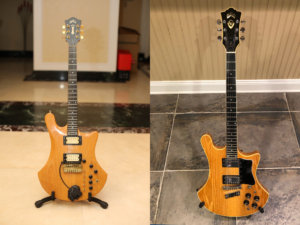 I’ve only ever seen two of these and they’re both very different, though they both have S400 trussrod covers.

The one on the left is kind of like the B402 bass with all of those controls (the wire and black attachment on the bottom is an additional pickup added by the owner) but seems otherwise like an S300AD.

The one on the right seems very much like an S300A, but has top binding on the body as well as the headstock veneer, which also happens to have a G-shield logo – a feature I’ve not seen on any the S300 guitar.

If you’ve got one of these or one that looks like it, or you have an S400-labeled guitar that’s got some other variation, please let me know! 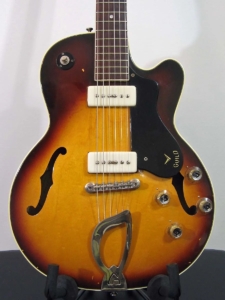 An old friend told me about the rare M65 or M75 but f-holes and two pickups and I thought he was nuts, but lo and behold there’s an entry and Hans’ book as previously mentioned, and here’s a picture of one from this Reverb ad.

If you’ve got one, please let me know!

If you want to sell it to me, even better!

If you’ve got one and you don’t want to sell it to me, then please email me so I can change your mind. 🙂 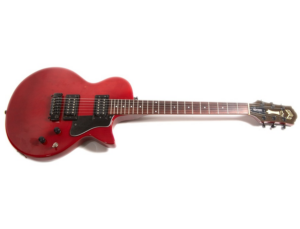 I have never seen one of these, but this picture could very well be one. The Nightbird ST is much like a Les Paul Studio, and is very much NOT like other Nightbird guitars. This is a solid body guitar that I believe has a flat top and may come in any number of colors. I currently own a Nightbird DX (Deluxe) that looks very similar but has a carved maple top, which is the feature I believe the ST does not have.

Please contact me if you have one of these. They’re not terribly desirable from what I can tell, but they’re quite rare and it’s the only Nightbird model I don’t currently own. 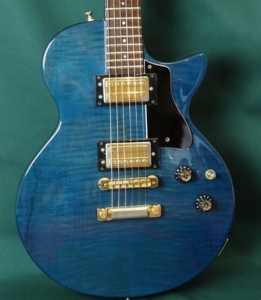 This Blue Guild Nightbird Deluxe was on Reverb for quite some time and the owner never responded to my many requests to buy it, likely due to the obnoxious CITES restrictions in place at the time.

If you are the current owner of this guitar and would like to have someone from the US throw money at you, please contact me.

If you own a Guid Nightbird Deluxe of any kind and would like to sell it please contact me! I’m fascinated by them all, but I’ll fall all over myself to get this one. Hell, I might even embarrass myself, though honestly that’s not quite the rarity I’d like to think it is.

I’ve had a couple of Guild S284 Aviators, and even one I thought was an S285 at first but wasn’t.

Guild S285 Aviators have a pointy headstock, no pick guard, and probably the single most important feature, a bound ebony fretboard with rising sun inlays. In fact, I’ve seen so many variations of the Aviator model that I’d consider the inlays to be the defining feature and everything else is almost optional.

The only Guild S285 I’ve ever seen was the one in this picture that was sent to me by its owner after reading one of my S284 articles, so if you’ve got one of these cool guitars with the sunrise inlays and the equal-length cutaways, please let me know. 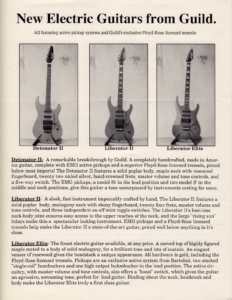 With inlays like the S285 and Liberator Elite the Liberator II took an already uncommon model and made it better and even more uncommon, though that may have more to do with Guild’s eventual bankruptcy in 1988 than the guitar.

This guitar also has the sunrise inlays, but is shaped more like a Strat than the Aviators. The guitar has a set neck, a bound ebony fretboard, and what we in the Guild collector circles call a “cakeknife” headstock, though since catalogs are often incorrect, any of those features may be different.

Thanks to a reader I now have one! Thanks!

I have never seen a photo, so I can’t post one. According to the Guild Serial Number chart only one exists. Do you have it? If you do and you don’t want to sell it can I talk you into taking some pictures of it for me? I’ll beg if I have to…

After buying a Guild R30 round-neck Resonator, I discovered that I need a Guild square-neck resonator in my life. Here are the models:

The top of the line in Guild’s square-necked resonator line, this model is made from flamed koa and has a bound ebony fretboard with large block inlays that have tiny Vs in them.

Here is one of the catalog pages for Guild resonators: [link] 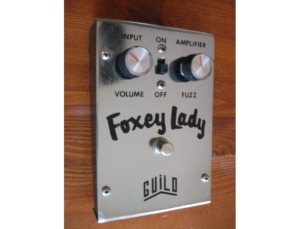 Got one from Reverb, and it’s beautiful! 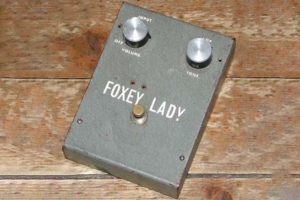 A Foxey lady with two knobs with white text that looks like the one pictured.

As with all the Foxey Lay pedals, the knobs may vary as well as the font used.

As with all of the pedals on my list, I may ask to have you take pics of the inside to prove that a previous owner didn’t mess around with things, but that’s a super easy process and you won’t break anything. 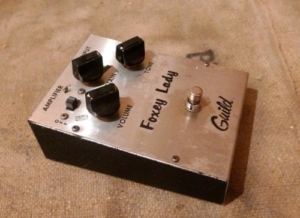 Found one on Reverb! 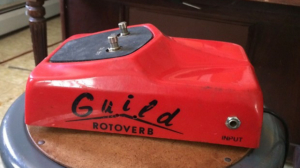 This one’s a long shot because I don’t think there are many out there, but if you’ve got one of these bright red Guild Rotoverb pedals let me know.

If you’re selling a pair of them for $7000 feel free to not let me know because, damn. 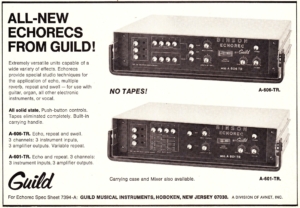 There are a bunch of Guild tape-based EchoRecs out there, but if you’ve got one of these solid-state versions, model A-606-TR or A-601-TR, then I absolutely would love to hear from you.

Sure, the tape-based models probably sound better, but what can I say? I’m juts a glutton for punishment and I love weird old Guild-branded tech like this. 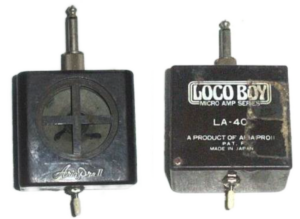 This is the only non-Guild branded item on my list, but it is the little amp that was re-branded by Guild as their Tweedy Bird MM500 Micro Mini Amp.

I don’t really need one of these, but I’ve been trying to find one for over a year and I’m so damn frustrated that I just need some closure! 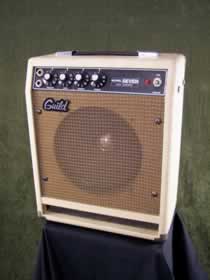 The only reason I want one of these is because I already have the model four, five, and six, and I just have a thing about complete sets.

Plus Grot over on The Guilds of Grot has one and I can’t just let that stand.

This is a little solid-state bass amp from the early 1980s. The knobs are often missing the silver centers, and that’s not a big deal for me. Actually missing knobs are OK too since I have a stash of replacements. I’d like the rest to look clean with no tears in the tolex or grille if at all possible.

I have one of these now, but the grille is ripped and that makes me sad. 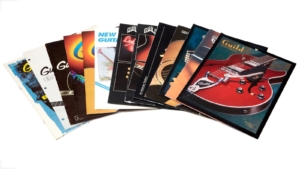 I am always on the lookout for Guild catalogs and price-lists, not to mention mailers, company documents, and whatever other Guild company ephemera you may come across.

To see what I already have, please check out these links:

If that’s too much work (I totally get it) just email me or leave a comment letting me know what you’ve got and I’ll let you know if you’ve got anything I can use. 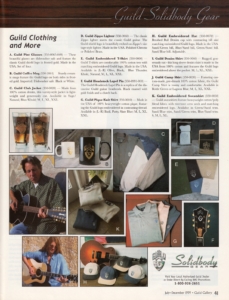 I’ve got a strange collection of Guild SWAG and corporate stuff that I’d love to expand. I’ve got Guild Lighters, Guild shirts, Guild jackets, Guild laptop bags, Guild signs, Guild silk banners, you name it, but there’s always something else. Got something cool with the Guild logo on it from one of the Guild factories or catalogs? Let’s talk!

Shirts, pint-glasses, zippos – it’s all good! Unless I have it already in which case it might still be good. 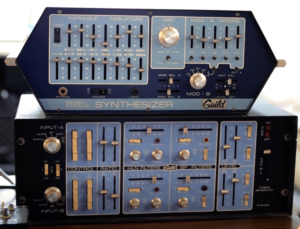 Speaking of long shots, punishment, and a love for weird old Guild-branded tech, these Guild Synths were never actually sold and the only one I recall seeing is from the Mu-Tron man himself Mike Beigel in this super-cool YouTube video (go to 1:50 if you just want to see the synth).

If there are any other Guild-related items that you’ve got, no matter how weird, please let me know.