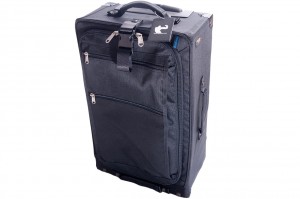 I am a frequent flyer with United Platinum 1K status which means I’ve flown over 100,000 miles in the past year alone. I’ve flown almost 400 segments in the last ten years and I have spent over 850 nights in various Marriott hotels. Why the stats? Because I’ve been on a lot of business trips and I’ve owned a single suitcase for the majority of them. That bag is a StrongBags Vortex 2 Flight Crew Luggage Roller that I have had for four years (since 2012) and I’m here to give it a real “I’ve hauled it around the world” review. 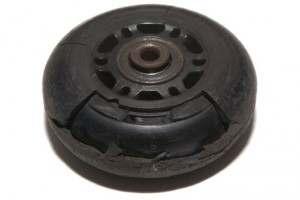 Back when I first started traveling for work, I had a Travel Pro bag because I thought those were the best.  To be fair it was pretty good, but after a year of weekly flights, one of the wheels exploded in Raleigh Durham International airport on Christmas Eve and, yes, I was flying home on Christmas Eve. Having suffered through many other minor problems due to the excessive wear I put on the bag I decided to order something better. The pilots all seemed to have very robust bags so I looked into what they had and discovered two major choices: LuggageWorks and StrongBags. 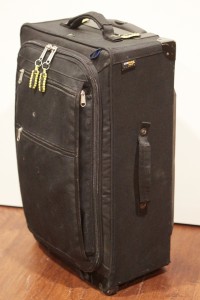 You can view pics of what the bags look like new on StrongBags’ site. The first image in this article is from their site, but pretty pics of new products don’t tell the tale. Instead, I’ll be sharing pics of my bag as it appears after over 100 cross-continental and inter-continental flights over the past four years.

I have checked this bag many times. I dislike checking luggage, but if I have extra time on a trip home and when the plane is overbooked I’ll sometimes check a bag so I can put my backpack in the overhead. There are no real signs that this bag has been abused by baggage handlers any worse than I do myself, and as you’ll see, I dish out a fair amount of abuse. 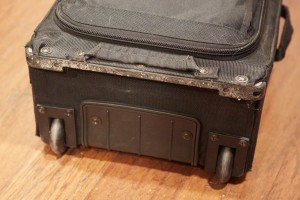 One of the things I do that is probably not in the best interest of my bag is that I spin it as if it had four wheels like those spinner bags. I don’t like 4-wheel bags for a variety of reasons, mostly because I don’t think they’d survive my abuse, but sometimes I just need to spin my bag. Why? Because it’s facing the wrong way when I get in an elevator for one.  Once it’s spun, when the doors open I kick the bottom of the bag so it rolls in front of me. I’m a luggage designer’s worst nightmare. As a result of all this spinning, I’ve worn the front edge of the bag a bit more than is probably normal. Sometimes I can feel that the bag doesn’t rest perfectly level any more, but it still stands on its own an aside from the bag not being perfectly level, it still functions perfectly. And yes, that handle on the bottom is a fantastic addition that I often use. 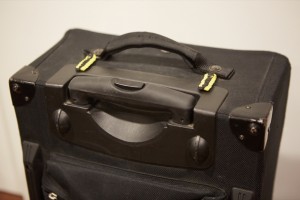 Another thing I tend to do is to pull my bag off of rental car busses, and while holding onto the handle, I push the button letting the bag shoot out from the handle after which I slam the wheels on the ground and almost literally hit the ground running. That has to put an insane amount of stress on the handle system that everyone is worried about breaking, and let me tell you that after four years of doing this, the handle still feels and operates like new. of all the things that this bag has done for me, that is probably the most impressive. 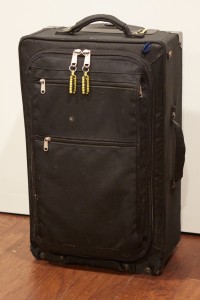 Another thing that I do to my bag that is probably not within the design spec is that I sit on them. Thats right, when I’m waiting in line at the gate I put my bag upright on the floor, whip out my Kindle, then using the bag like a stool, sit and read. I’m no featherweight at 230+ pounds, and let me tell you that sitting on this bag is like sitting on a giant piece of angular aluminum bullion. It has never so much as flexed under my weight and has survived me doing this hundreds of times.

The reason it can survive this is the extremely robust aluminum frame. This frame along with the high-strength handle makes this bag a bit heavy even when empty, but the strength is just ridiculous. The only problem I’ve had sitting on this bag is that other people see me doing it and attempt to do it themselves on their own inferior bags. Here’s a bit of advice from a pro: Unless you have a bag like this, don’t sit on it.

Another downside of this rigid frame, aside from the weight, is that the bag is pretty much incompressible. It can’t be squashed into an overhead, it can’t be squished that 1/2 inch to make the door close, and it doesn’t fit in some overheads, though that is pretty rare on larger aircraft. StrongBags does make a slightly smaller bag of this type called the Mini V which can help to alleviate this problem if you run into it a lot. The Mini V is only 19″ high whereas the Vortex 2 shown in this review is a full 22.25″ high. 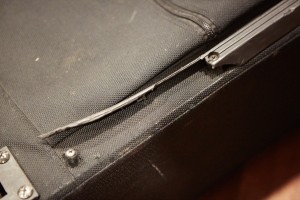 The only thing I can’t rave about on this bag is the bumpers on the back. Within a month of owning the bag I had smashed these bumpers to bits because I tend to slam the bag into curbs, steps, and anywhere else you’d think a bumper like this would protect the bag.

To be fair, the bumpers don’t really protect the bag so much as the pocket on the back of the bag that sits between the bumpers. I never use those pockets, so I pretty much just left the bumpers in their smashed state for years but the protruding bolts tend to snag on those same curbs and steps that the bumpers are supposed to impact. One of the cool things about these professional bags is that most of the parts are user replaceable so I recently decided to replace them. 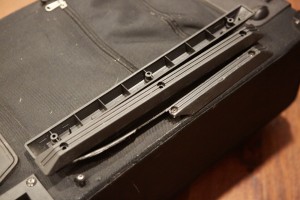 Having a rare half hour of downtime, I decided to see if I could buy the bumpers from StrongBags’ site, and after $8, a small shipping fee, and a short wait, the new bumpers arrived in the mail. Sadly, the new bumpers are the same cheap plastic as the old ones, so I don’t have much hope of them holding up to my abusive luggage-handling ways, but we’ll see. They really should be some sort of hard solid rubber or something so that they don’t shatter on impact like these do. 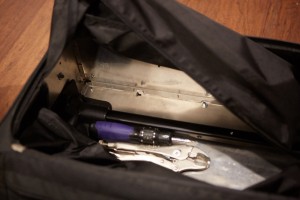 Installing them was pretty simple and involved zipping open the liner, finding all six nuts and bolts, finding the damn Vice-Grips (these are all locking nuts), then easily removing the old bumpers.

Having the liner open allows visibility into the aluminum shell of the bag which is pretty cool. You can see how robustly built this bag is and why it can stand up to the rigors of a big ol’ frequent flyer like me sitting on it all the time. In fact, the entire liner can be removed and washed which is pretty cool, but there’s something satisfying about the aged patina achieved through years of hard wear so I have yet to do so. 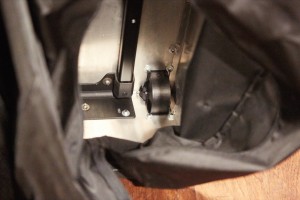 With the liner open I decided to do a quick check to see if anything else needed service or replacement. Really, the only wear on the bag is that which I’ve already mentioned. I imagine that the wheels will eventually fail since they’re what takes the most abuse, but so far they’re as smooth today as they were the day I bought the bag. Of course, StrongBags sells replacement wheels and sells the wheel assemblies as well so if they do ever fail I still won’t need a new bag. 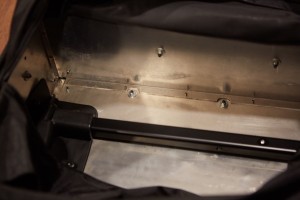 On the last picture you can see the internal structure for the handles which some people complain about since it lowers the internal capacity of the bag. While I’d love to have more room, I’I adapted to the internal handle pretty quickly and now it doesn’t bother me at all. Another thing that bugs people about bags like these is that they don’t open like a clamshell as most “normal” bags do. This can be a drag when packing, but the reason for this port-hole type of opening is pure rigidity. With a clamshell design, the zipper is a huge weak point in the overall structural integrity of the bag. That is simply not the case with these bags.

I tried to capture the fact that the frame of the bag actually has some pretty nice dents it it, all of which I have to imagine would have ruined a lesser bag. The back panel on the bag almost looks like it was in a firefight. Sure, it would have been a firefight with BB guns or something, but it still looks battle scarred. With the cover zipped up, you don’t see any signs of this abuse.

With the new bumpers on I zipped it all up, packed it (this was all done before a trip from EWR to LHR) and stood it up for some pics. Total time to swap out the bumpers: 15 minutes, and that included looking for the vice grips, taking pictures, and repacking the bag.

This bag probably has a 1/4 million miles of airline travel and who knows how many miles of being dragged behind my sorry ass as I trudged on to the next thing in whatever town, city, or country was on that week’s agenda. The only thing I’ve ever done to it is replace these bumpers. Not too shabby. 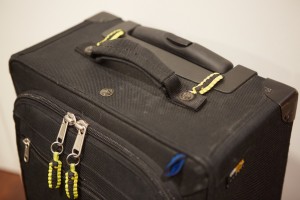 Would I buy another StrongBags bag like this? Hell yes! I love this bag. I love that it’s so robust, I love that it is user repairable, I love that the zippers still work, the lining has never torn, and that it was only a bit over $200.

Yes, it’s filthy (the yellow zipper pulls were fluorescent yellow when I bought them), but I didn’t buy it to look pretty.  The yellow zipper pulls are so I can identify my bag easily on a luggage carousel or crowd of bags such as might be seen after a mandatory gate-check flight. I bought it because I needed a bag that could keep up with me. This one does that with aplomb.

I’ve seen “regular” luggage cost a LOT more than this bag for no reason other than it’s got some famous designer’s name on it. If that’s your thing, then more power to you, but for me that’s a waste of money. I’ve seen “regular” bags without designed names on them still sell for more than I paid for my Vortex 2. As of December 2016, that price is still $229.99.

I recently had a friend buy a LuggageWorks bag probably because of the handle and because it looks more like a pilot’s bag, and after closely inspecting his bag I still like mine better.  I think the lines are cleaner and I still like that the handle fits flush with the bag. If I could change one thing it would be the bumpers. They really need to be more robust.

Here’s hoping my Vortex 2 lasts me another four years. Hell, I expect it to still be going strong after ten!