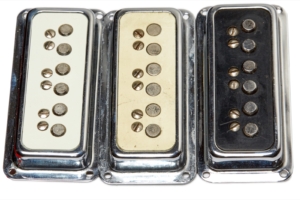 Originally a part of my review of a Guild X160 Rockabilly guitar. I felt that the subject was asked about enough to warrant its own aritcle.

The pickups in Guild X160 Rockabilly guitars are DeArmond 2000s, and yes, this is about to get very confusing. If you’ve done even a little bit of reading about this topic, then your head is no doubt swimming with 2000, 2k, the other 2000, the vintage 200, and maybe that other company that’s making a 2000. Oh, and let’s throw the word Dynasonic in there for good measure. 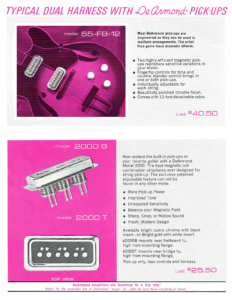 Originally there was the DeArmond 2000 which Gretsch called the Dynasonic (because Gretsch). That pickup is shown in this original catalog page from 1965, where you can plainly see that it was called the 2000 and not the 200. I bring that up because at some point someone decided that it was called the 200 (possible due to a typo in a ’60s Gretsch catalog, though I have not yet proven that) and that stuck, causing even more confusion over the years which I’ll show you in print in just a bit. Read that again: there is no such thing as a DeArmond 200! Remember that as there may be a quiz at the end.

By the way, I would like to personally thank Ben Cheevers from musicpickups.com (One of the most thorough DeArmond references I’ve seen!) because he supplied me with high-res scans of the entire 1965 DeArmond catalog, which is where this beautiful purple page is from. Compared with the original pic I had (which was by far the nicest I’d been able to find), this is amazing, so thanks Ben! 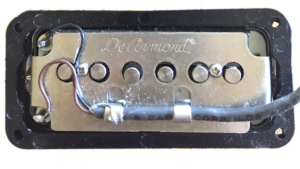 In the late ’90s Fender owned the DeArmond name and reissued the pickups (sort of) as the DeArmond 2K for their import DeArmond guitars, but they were not the same design; they just look the same from the top. From the back they look like this with the DeArmond logo embossed on the baseplate, and most importantly, the large pole pieces extending through the plate. These are Fender-designed pickups that are said to be constructed like P90s.  Although I’ve not taken one apart, that comes from Bill Turner who was in a position to know exactly what the deal was with these pickups. Oh, he’s also one of the guys that founded EMG, so yeah—he knew his pickups. 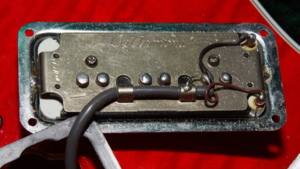 At some point around then, Gretsch (who would not be sold through Fender until 2004) contacted Fender about using DeArmond pickups for their Historic series of guitars. You can read more about this in this interesting thread over on GretschPages.com, where Bill Turner from Fender is quoted as saying that they had also designed a “better” 2000 reissue when they designed the 2K. That better reissue would be called the DeArmond 2000 even though it wasn’t the same design as the original 2000, either. These new DeArmond 2000 pickups are what is in this Guild X160 Rockabilly guitar. It’s a DeArmond 2000, which is not a 2K but not an original 2000, either. Got it? The important thing to remember is that these 2000s sound more like the original 2000s than the 2Ks do. 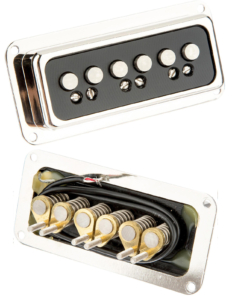 To make matters even worse, Gretsch later reissued pickups designed more like the originals and called them DynaSonics (shown to the right), but at least they didn’t call them 2000s. Then TV Jones came along and released his T-Armond pickups which are also like the originals having been designed based on the vintage pickups in Brian Setzer’s Silver Jet guitar. The Seymour Duncan custom shop will also wind you a pair in vintage or hot specs which they thankfully do not call a 2000 or 2k or anything of the sort, instead calling them Duncan Dynos.

All of these pickups look very similar from the front, so it can be quite challenging to determine which model is in a guitar without turning some screws, and even then it can be tough if you don’t have any good references. Perhaps I can be of some assistance in that regard, because like most everything in my life, I went down the rabbit hole in order to learn as much as I could about these pickups. Remember kids, when you go down the rabbit hole you may meet (or become) the Mad Hatter. 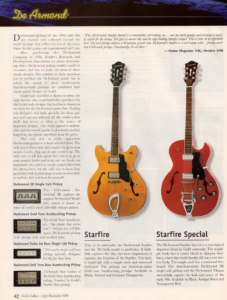 Remember when I said that a lot of sources insist that there was a DeArmond 200 pickup? Well, take a look at this page from the July-December 1999 Guild Galleries magazine/catalog which states that the 2K single coil pickups updates the original DeArmond Model 200 which is found on some of the world’s most collectible vintage guitars. By the way, that’s the same freaking catalog that I referenced in the introduction that states on page 33 that the X160 Rockabilly comes with DeArmond 2000 pickups and then on page 42 of the same catalog it says 2k. It’s no wonder people are confused!

I should point out that I can’t tell you if the Westerly-made X160 Rockabilly guitars have 2Ks or 2000s unless someone sends me a pic of the back of a pickup like I’ve shown here. Sure, the catalog page from 1999 says that they have 2K pickups, but catalogs can be wrong as we’ve seen. You know, like how it says that the 2K is based on the non-existant 200. Furthermore, the 2002 Fender Frontline catalog I have shows on page 15 that the X160 Rockabilly (now made in Corona) has Model 2K pickups while page 29 of the same catalog says that pickups in that model are DeArmond 2000s. Clearly, the confusion is not limited to Internet forum posts. For what it’s worth, this Westerly-made X160 Rockabilly appears to have DeArmond 2000s in it. 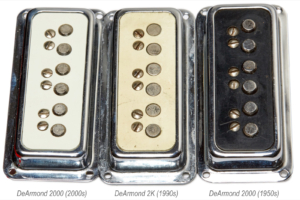 Over the course of the past year or so, I’ve managed to procure a pair of ’90s DeArmond 2Ks and a pair of original 1950s DeArmond 2000s to go along with my 2000s from the early 2000s (which should make this even more confusing). This picture shows the 2002 DeArmond 2000 from this X160 guitar on the left (white), a 1990s DeArmond 2K in the middle (yellowed), and a 1950s DeArmond 2000 on the right (black). There are subtle difference aside from the color of the covers, and I should point out that the ’90s 2k in the middle may be discolored from age, though it certainly does help with differentiation in this discussion. Just when I think I’ve proven that all 2ks have yellowish covers I see some with what looks like pure white tops which just proves that looking at pictures on the Internet is not really research.

The ’90s 2k (middle) seems to have flatter pole pieces than the other two which appear to have more bevelled poles. Aside from that (and I wouldn’t make a determination on that), there is little to differentiate the three pickups when viewed from the front. Remember, the middle one is possibly yellowed with age and the black one is black because it came from a Gretsch. Really, the only way to be sure is to pull them and look at the backs, so let’s go ahead and do that. 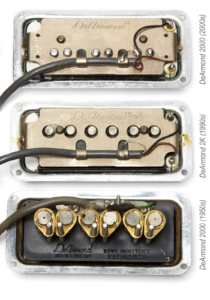 The 2002 pickup (top) has the adjustment screw bottoms showing through the baseplate, while the 1990s pickup (middle) has the pole pieces sticking out. The 1950s DeArmond 2000 (bottom) is quite clearly very different than the other two. While the modern Gretsch and TV Jones reissues look like the ’50s pickup at first glance, the tell-tale marking on the vintage pickup is the markings that state: DeArmond  REG U.S. PAT. OFF and ROWE INDUSTRIES TOLEDO.O. U.S.A. molded into the plastic back of the pickup body.

How these pickups sound in comparison to each other is outside the scope of this article and is a subject for another time. Some other great resources for learning about these pickups and their variations can be found here, here, and a special acknowledgment to dbirchett over on the LetsTalkGuild forum who got it all right in his post here. By the way, if you’d like to see the internals of these pickups, check out this excellent thread over on Gretsch-Talk where someone did a teardown of the modern 2000 and 2k pickups thus proving visually that the 1990s DeArmond 2k is build more like a P90 than a vintage DeArmond.