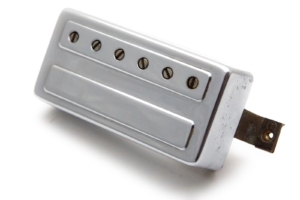 Today’s mad science experiment involves me tearing apart a vintage Guild AntiHum pickup from the mid-1960s. This rare item is pretty valuable, so if you’re sensitive about gore, best to look away.

You and I both know that you’re not going to look away.

Like with the vintage Guild HB1 I dismantled, I tore this pickup apart in the name of science. Well, that and pure raw curiosity; I like to see how things work. So, without further ado, let’s dig in and tear this puppy open! 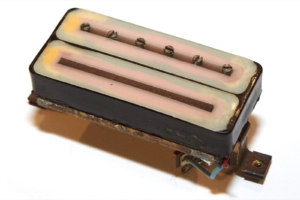 The first thing I noticed about this pickup with the cover off is the fact that it has adjustable pole pieces but no slugs. Instead of slugs, the secondary coil surrounds a large ferrous bar (called a bar slug) which is not a magnet. This is similar in design to other mini humbuckers from the same time period including offerings from both Gibson and Fender, some of which actually have  an almost identical design. In fact, you can order a kit to build your own from StewMac at this link.
For a picture thread of the teardown of a Newark Street LB1 pickup, check out this excellent thread over on LetsTalkGuild.

I think these pickups without their covers are profoundly ugly. I’d go so far as to say that they’re even uglier than the later Guild HB1 pickups when they have their covers removed, and that’s saying something! 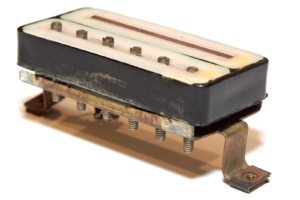 While the vintage Guild HB1 that I tore apart (link) had the coils protected by a yellow vinyl tape which was then covered by black fabric tape, these vintage AntiHum pickups  Seem to be sealed with a black resin. When I first saw the pickup with the cover off I thought that it was wax-potted like many pickups are, but then I tried to take the material off which is when the frustration began. It didn’t scratch easily like wax does. Hell, I could barely make an indent at all, so that’s when I pulled out the big gun: my delightfully dangerous Riobi variable temperature heat gun.

I set the heat gun to its lowest setting, which is 200 degrees Fahrenheit. It will go to 1050 degrees, but I didn’t want to melt the entire assembly and/or burn down the garage. When this baby is on high it spits out sparks will easily ignite combustibles of the type used in the construction of my house’s frame, so I figured the low setting would do just fine. The black material did not melt while the metal base got too hot to handle. 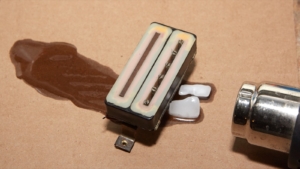 To prove to myself that I wasn’t going mad (a difficult task on most days), I got a chunk of paraffin wax from my wife who uses it for canning. When I got about a third of the way into my reasons for needing wax she lost interest, begged me to stop talking, and said, “just take the wax.”  I get that a lot. The picture to the right that looks like it has two melting chunks of ice is showing that the pieces of paraffin wax melted with ease while the black material on the pickup bobbins remained impervious to my attempts at thermal destabilization. 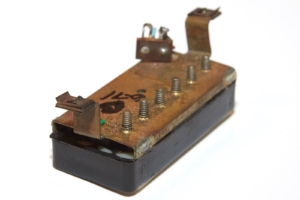 I believe the black material to be black electronics epoxy, though it could be some sort of resin. I’m not a chemist; I’m just a guy who likes to tear things apart.

While pondering my options, I sat staring at the pickup while it cooled on my desk, which is when I noticed that the base plate had no attachment screws. Most larger humbuckers have small screws that hold the bobbins onto the base plate, but this one did not. Thinking that it could be that simple, I backed out each of the adjustable pole pieces at which point the bottom fell away from the bobbins. 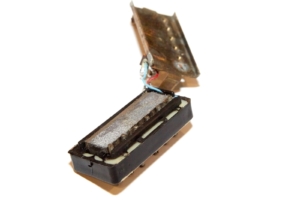 With the base plate removed I had a better view into the internal workings of the pickup. It’s designed very much like a larger humbucker in that there is a bar magnet in the bottom which is touching both the slug bar and the adjustable pole pieces. From here it was a simple matter of pulling out the pole pieces and pushing out the slug bar which then let me easily pry the bar magnet off. This left the coils visible from the underside. Note that the baseplate could not be completely removed without cutting the wires or at least desoldering them from the solder terminals. 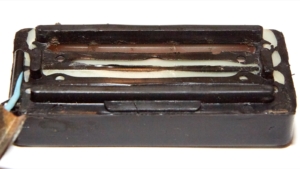 I pulled out some more equipment and measured the bar magnet. It measured 690 on the gauss meter which plants it firmly in Alnico V territory, which is what I expected based on Guild’s reproduction of the pickup (the Little Bucker LB1). One odd thing about the design of this pickup is that you cannot slide the magnet in or out like you can on a larger humbucker since on the AntiHum, it is held in by ridges. The only way to get to the magnet is to remove the base plate. It kind of looks like the little ridges are made of the same resin or epoxy as the material that seals the coils, but I suppose it’s possible that they’re strategically placed bars that got coated in the material. Again, I’d need to destroy the pickup to find out for sure. 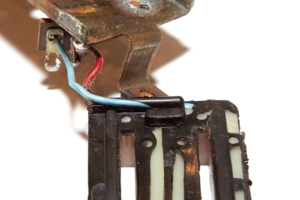 The wiring is also encased in the black material which makes the entire assembly more robust than the Guild HB1 I dismantled. On the larger HB1, there is no sealant like this, and so the wires are taped down in an effort to immobilize them. Since the wires on the pickup bobbins are ridiculously small, they’re also easy to break. The black sealant makes that a practical impossibility unless you had something like a sawzall accident with your guitar, which I suppose could happen in some of the rougher bars I’ve seen. 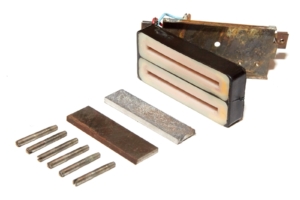 With everything apart as far as I could get it, I came to the final realization that I could not get to the coil windings unless I probably destroyed the pickup and I decided that I didn’t want to do that since these are great pickups and fairly difficult to get. Instead, I think I may slap the nickel covers from a pair of LB1s on it and put it into my Newark St. S200 T-Bird which will make it cry like the angel that it wishes it was. Or maybe save it for another project. Either way, I had my fun.

As a last note, I will add that the magnet should be returned to the pickup with the negative (south) side of magnet towards the pole pieces. Luckily I had another pair that I could compare it to because I didn’t think to measure before I took it apart. That would be real science, and if I did that then I wouldn’t be mad, now would I?

Watch for another article where I tear down a modern Korean-import LB1 Little Bucker pickup.