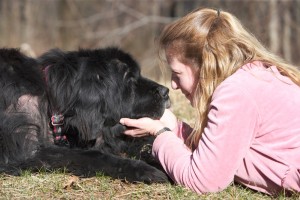 Just after we celebrated Daisy turning 12 ½, we took her to the vet where we were saddened to learn that Dr. Fritz, the beloved vet for both Cozy and Daisy, had died suddenly in New York. With Dr. Fritz gone, we took Daisy to a new vet who discovered a tumor in her belly that had apparently been there for some time. The good news was that it was probably benign, though large. The bad news was that having a heart arrhythmia at her advanced age meant that she would not likely survive the surgery needed to remove it.

This was a shocking blow for us. While surgery could save her from the tumor, we weren’t sure that we would want to put her through that. The point was moot, though. Since we had not had her heart problems resolved, she would likely not survive surgery to remove the tumor. Lauren and I both felt like we were to blame. After living through Cozy’s ordeal, we had put our beloved Daisy in a similar situation. Of course it wasn’t that simple, but we blames ourselves nonetheless.

Daisy was sick and as time went on she only got worse. Once poor Daisy had not been able to get outside in time which quite upset her, though we told her it was nothing to be ashamed of. A couple of times she had lost her footing and couldn’t get up. She had even fallen down the stairs a couple of times, after which we kept her contained to a single floor. Sadly her favorite activity, walking with the kids to wait for the bus, was too much for her now. Of course she could still get up on the couch where she didn’t belong, so her spunk was still intact, and she was never chastised for anything. Hell, I had been feeding her meat from the dining room table for over a year.

She still seemed content to follow Lauren around. She still ate and drank and all her bodily functions still worked, though it was becoming obvious that her quality of life was deteriorating. Sometimes she seemed to get a neck cramp. Other times she seemed to have difficulty breathing. The tumor in her belly had become huge and was no doubt pressing on other organs and causing her distress.

The worst part of it all was watching poor Daisy. Like Cozy at the end, her mind was still sound. She knew what she wanted and needed, but her body was failing her. One night she couldn’t get up from the hardwood floor in the living room. I sat with her trying to help her, and she would look down the hall and woof. She wanted to go to bed. Mommy was in bed and she knew that she should be there too. She just couldn’t convince her body to do what she wanted. As coherent as she was, she did get confused from time to time, and we would catch her staring into a corner for no apparent reason.

Our girl was very old, and the time to decide her fate was upon us.

In the same way that Cozy had a connection with me, Daisy had developed a connection with Lauren. I have pictures of Lauren breast feeding Meghan with Daisy’s head on her lap next to the baby. Apparently Daisy was sitting on the couch then, too, and I had been fooling myself for years thinking that rules were being followed.

My wife had been wonderful with Daisy, even when she had gotten so sick. Lauren would routinely clean off her eye goobers, sitting and loving her and generally making her happy, even when skin infections and allergies caused Daisy to smell pretty terrible.

Though it saddened me terribly to see Daisy in such a state, I knew that it was even harder for Lauren. I know part of her desperately wanted to hope that Daisy would just get better, but we both knew that she wouldn’t. We had started to have discussions about Daisy’s quality of life.

Daisy was the sweetest, most gentle dog I had ever met. It pained us to see her so sick, and we knew that it would be very hard to let her go, but having been through this so recently with Cozy, we knew what was coming. Experience doesn’t make this sort of decision any easier.

When Cozy was sick, I kept my sanity through the outpouring of support I found on Newf Net. I posted there and humbly asked that the members give Lauren that same support that they had given me and the outpouring of prayers and good thoughts was a great help to Lauren during this sad time. Of course, we both shared the pain with Cozy and we both shared the pain with Daisy, but Miss Daisy was Lauren’s special girl, and this battle was primarily hers.

As Daisy got sicker from the tumor in her belly, she started to slow down considerably. When she slept, it was very deep and her breathing would slow to the point that we would have to watch her for a while to wait for her to breathe again.

When Meghan and Colleen started second and first grade respectively, Daisy was only able to make it to the bus stop for the first few weeks, which clearly upset her. On the days she could make it, everyone including the bus driver, Mrs. B, made a big fuss, which Daisy thoroughly enjoyed. Daisy had always liked to be the center of attention, especially since she had grown accustomed to being an only dog.

On the day of Colleen’s last school program for the year, Lauren had gone out to watch the show. I was tied up with work and couldn’t leave, but had somehow left one of the doors open. When Lauren came home, Daisy was sitting at the bus stop on the side of the road, patiently waiting for Lauren and her girls to come home. Though she had trouble walking the incline to the road, she knew the drill, and knew where to wait for her people.

On another occasion, Daisy was too weak to make it to the bus stop, so Lauren let her sit on the landing by the front door. She left the front door open so Daisy could watch the bus stop at the top of the driveway, some 150 feet way. When the bus came, Mrs. B asked where Daisy was, fearing the worst. As Lauren turned to point to the open door, she saw Daisy slowly walking up the driveway to the bus stop. Thankful that Lauren and the girls would be coming down the hill to meet her halfway, she stopped and wagged her droopy Eyore wag in anticipation as they approached.

Her weakness made it difficult to get up and down the stairs. We had long ago removed the carpeting from the stairs in the house, and the bare wood was a problem for her because it provided no traction. We bought some small carpet sections and I nailed them to the stairs, one of many such concessions we made for our elderly but still regal Miss Daisy.

One day she had tried to go down the deck stairs to relieve herself in the yard, but the wooden steps were slippery with mildew.  She got stuck in the middle of the 14 steps where she sat looking afraid, weak, and very sad. Confused and looking pathetic stuck in the middle of the stairs, it took us over an hour to get her down. Once we got her off and settled, I got the power washer from the garage and scrubbed for two hours in the rain to clean all of the steps. With the steps now stripped down to the wood, Daisy would have more traction.

Shortly thereafter we decided to use baby gates to keep her on one floor of the house and Daisy did not like being thus restrained. She did not like the idea of relieving herself on the deck, no matter how many times we told her it was alright. She was losing her dignity before our eyes. This was no way for a Duchess to live.

Her displeasure at being restrained led Lauren to feel tremendous amounts of guilt. She likened it to the family finally taking her grandmother’s driving license away from her while she protested that she could still “Drive just fine”. Lauren struggled between the desire to keep her Daisy around and Daisy’s quality of life. I knew that struggle all too well. I also knew that Lauren and Daisy had to decide on their own when it was time.