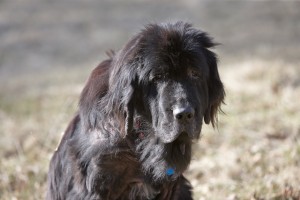 Since we lived in the woods, we often had wild turkeys roam by our yard. When Cozy was alive she would bark and scare them off, so they never got too close. In fact with Cozy around, the only thing that would come inside the fence were the numerous insects and the gas man. He liked big dogs, as did many of the insects.

At any rate, Daisy had gotten very sick, and didn’t go outside much except to relieve herself. One day we had a flock of wild turkeys come visit. Cozy hadn’t been around for over a year at this point, so two of them decided to fly inside the fence.

I first discovered them when I heard a noise and looked out the bedroom window to investigate. There were two turkeys inside the fence: a tom and a hen. In almost ten years no one had broken the perimeter of the fence. I was more than a little surprised to see these big birds in our yard. I went outside to shoo them away, armed with nothing more than my scary man voice.

As soon as I stepped foot outside, the tom jumped/flew over the fence and into the woods from whence he came. The hen, apparently unable to figure out how she had come to be inside the fence, started to run back and forth along the fence line in a panic. Along a span of about twenty yards, the hen would run and gobble while the tom watched from outside the fence. I recognized the look on his turkey face. He was looking at her the same way I would look at Lauren when she’d tell me that she had no idea where the car was at the mall.

As the tom and I watched, the hen continued to panic; run and gobble, run and gobble. I was trying to think of a way to get the turkey out of the fence without hurting it. Right about then Lauren came outside, and with her came Daisy. At that moment, the hen became even more panicked and increased her frantic running and gobbling. 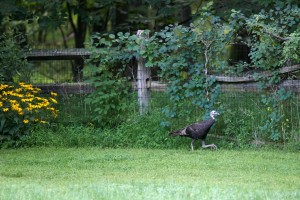 Turkeys are capable of flight, but only over short distances. I had seen them in the trees outside the fence before, which for a science fiction fan like myself, was a little unsettling. Instead of flying they would jump from limb to limb and use their wings only  as needed. Their camouflage was so good they seemed to disappear on a fall day. I could hear the ruckus, and I could see the disturbance in the trees; but I couldn’t see what was causing it. I expected to see the triangular laser dots from the invisible predator’s targeting system at any minute. I only hoped that Jesse Ventura would back me up with the mini gun if things got hairy. They’re in the trees…

Daisy saw the turkey, and took a tenuous step into the yard. Our yard was pretty big, so there was probably a good fifty feet between Daisy and the bird, but they both clearly knew that the other was there. Daisy stepped into the yard, lifted up her head and with the same calm gentle voice she always used, let out a single wuf.

At Daisy’s ferocious verbal attack, the hen finally couldn’t take it anymore, jumped and flew over the fence and ran away with the tom. Daisy, it would seem, had saved the day.

Lauren and I both cheered, got down on our knees next to Daisy and thanked her for saving us from the invading turkey hoard. She wagged and generously accepted the accolades from her adoring subjects, and the castle was safe once more, the infiltrators having been vanquished by the mighty bark of Miss Daisy, Duchess of Newfoundland.