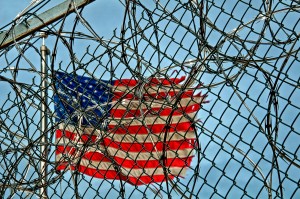 In order to further my career as a networking consultant, I was attempting to pursue a certification called the Cisco Certified Internetworking Expert (CCIE). This advanced test was given in only three locations in North America at the time, one of which was Halifax, Nova Scotia. After months of intense studying, I booked my travel plans and set off to take the eight-hour test in Canada.

I flew into Halifax and after departing the plane went to wait for my bags at the luggage carousel. I always kept my laptop backpack with me, and I had put it on the floor next to me while I stood and waited for the flashing lights and klaxons to announce that our baggage was soon to be delivered.

Bored, I watched the people around me and noticed a dog being trained by someone in a police-type uniform. This happy puppy was running through the baggage claim area with abandon, chasing something being thrown by the uniformed man with a gun. The dog, a golden retriever that looked to be about a year old and full of life, was chasing a small red Kong just like Cozy’s.

On one of the many retrievals, the happy dog came scampering my way. Being a dog lover, I naturally knelt down to pet the dog while he happily sniffed my backpack for every good smell he could pull out of it. Dogs always loved to sniff me and everything I own because everything I own smelled like Cozy. This pup was really having a good sniff and his tail was wagging a mile a minute. The officer came over and we chatted for a bit about dogs and Kongs until the luggage alarms sounded at which point I politely excused myself and  went to get my other bag.

After I retrieved my larger bag from the carousel, I made my way to the exit in order to catch my bus. On my way out I was stopped by two more armed officials who politely – but firmly – asked me to come with them.  When I asked why, I was again asked politely but firmly to come with them.

I was brought into a windowless room with a humorless woman wearing blue rubber gloves standing behind a stainless steel table. Wondering to what lengths they were going to search, while simultaneously wondering what my rights were in a foreign country, I focused on being helpful and polite.

“Please put your bags on the table”, the humorless woman said. The two guys with guns stood quietly by the only exit.

I complied and asked “Is there a problem?” in my best non-threatening voice.

“The dog marked your bag as possibly containing drugs.”

God, I’m an idiot! The friendly puppy outside was a drug-sniffing dog in training. All I saw was a happy puppy with a Kong but he was in training to sniff out smugglers, terrorists, and other ne’er-do-wells, the likes of which I make a point of not associating with. My bag was covered with the enticing smell of Cozy since the backpack usually sat by my desk at home and Cozy, in an effort to lie close to me, would often lay against it. Any dog would love to smell my bag. It just so happened that when this dog liked the smell of a bag, people with guns came a-callin’.

Having read a fair amount about dogs, I knew that drug dogs were trained not to bark or to point, but to sit when they found drugs. In this way they would not attract attention like they would if they stood and barked at a smuggler. The men with guns could then quietly remove the threat from the busy airport in order to deal with it quietly and out of sight. I could attest to that part now from experience since, thanks to Cozy’s love and affection, I had become the possible threat.

“I have two huge dogs at home, and one of them sleeps next to this bag. I’m sure the dog just liked the smell. Besides, don’t drug dogs sit when they mark a bag?”

When detained by customs under the suspicion of drug trafficking, the best forms of reply when being interrogated by humorless women with guns are yes ma’am, no ma’am, and no excuse ma’am. Implying that they were mistaken probably didn’t make a lot of sense, but this was my first time being detained and I hadn’t yet figured out the routine. The humorless lady looking down at my bags, glared up at me from beneath the brim of her hat and replied “not always.”

I started to get the impression that I was on the verge of being labeled as non-cooperative, which I imagined was a euphemism for handcuff and beat at will. I decided that if ever there was a time to be a polite law-abiding nobody, it was then, even if a small part of my brain was wondering about the lack of stereotypical Canadian politeness in the room.

The very serious woman behind the shiny table opened my bags and asked, “Is there anything in your bags that will harm me or puncture my gloves”.

She proceeded to pull every last thing out of my bags. Clothes, computers, cables, books, pens, underwear, everything in my shaving kit including my Advil bottle filled with Advil and two other unlabeled prescription medicines.

She proceeded to empty the pills into a small bowl. “What’s this?”

Thinking Why those would be my keys to an all expense paid body cavity search, I replied, “They are prescription migraine medicines. I keep them in the Advil bottle so that I always have them with me.  I usually only need a few, which is why there are so few in there. They are Midrin and Celebrex”

Again with the look from beneath the brim of the impressive and humorless hat.

Convinced I would be spending the rest of my life in a maximum security prison with other smugglers of dangerous migraine medicines, I stood quietly while she contemplated my story. It was true, but I had a sudden epiphany that truth is irrelevant when you’re not the one with the gun.

“That’s probably why the dog marked your bag”, she replied, as if talking to a child.

I knew more about dogs than anyone in the room, and apparently more about drugs, too. The dog liked my bag because it smelled like Cozy. Drug dogs are trained to sniff out narcotics, not migraine medicine. Still, they had the guns and I had, well, what I had was a brewing sense of righteous indignation coupled with my pedantic, know-it-all, sarcastic charm. After careful consideration I opted for the path that would had the highest probability of keeping me from wearing an orange jumpsuit while cleaning trash on a cold Canadian highway.

After deciding that I wasn’t a threat and that there would be no need for more rigorous and painful searching, she informed me that I could repack my bags and be on my way. She also told me that when traveling between countries, I should bring the original prescription bottles for my medications.

On the long bus ride to the hotel, I contemplated packing my checked baggage with large caliber marital aids so I could make a quiet protest to the humiliation of having been searched because a dog liked the smell of my bag. Luckily, I had developed a sense of when such actions would not be in my best interest, so my clever plan would never come to fruition. Still, the image of the blue-gloved humorless woman opening a bag filled with such unmentionables made me chuckle to myself on the bus which drew strange looks from my fellow travelers.

I had scheduled my trip in such a way that I could spend an extra day walking around Halifax and taking pictures. I spent the next day exploring Halifax, enjoying the history and architecture and discovering my favorite food – fried pepperoni. Though I didn’t pass my test, I did have an adventure and I have always held the belief that adventures are what make life interesting, adventures containing the risk of incarceration doubly so.