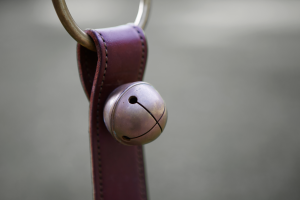 Imagine a bitterly cold January day in New Jersey. The temperature is -10°F, there is a cold wind blowing, and the frozen snow outside makes the yard look like a bleached out version of the Sahara. The environment is downright hostile, and is fit for neither man nor beast. This tale takes place on just such a night, and the story you are about to read is true. The names have not been changed because no one involved can even pretend to be innocent, though the only crime committed was that of murdering my patience.

Inside, there was a fire smoldering in the fireplace. Darkness had fallen, and everyone else was in bed while I worked in the office doing whatever the hell it is I do in there all night long. Cozy was lying contentedly in the the adjacent Family room.

Or so I thought.

As I sat and worked, I heard the bells ring on the door.

We had long ago hung sleigh-bells on the door handles and trained the dogs to ring them when they wanted to go out which helped to keep the doors from being destroyed by claws. The problem was that Cozy would ring them when she wanted to go out, when she casually walked by them, when she wanted to mess with me, or when she was just simply bored. Because had been found guilty of malfeasance regarding her improper ringing of the bells, I had learned to ignore the first and…

…second round of bell-ringing.

With a loud sigh I got up from my computer, walked into the family room and saw Cozy standing by the door. Assuming this to be one of the actual – and rare – I need to go out events, I walked over and slid the glass door open just enough to let her out. The wind worked hard to suck all the warmth from the house while the door was open, but Cozy didn’t seem to understand the laws of thermodynamics. For all I know she did understand and just didn’t care. In fact, it wouldn’t have surprised me if she had come to the conclusion that I had made a slight miscalculation in the temperature of the fissionable material which would no doubt result in the immolation of everyone surrounding my planned experiment and sadly, having been told repeatedly not to touch anything in the office, she was unable to render the anonymous assistance that would render the cold fusion theory a success and forever change the world. In a typical example Newfy passive aggression, she probably just decided to make me open the door so she could stand there and sniff the cold air in protest of my fascist rules.

Cozy looked up at me adoringly.

I grumbled, “Cozy, go lie down” as I slid the door closed. She dutifully sat and watched me go as I walked back into the office. I settled into my chair and started to get back to whatever it was that I was doing. Let’s see, if the fissionable material is super-heated to a temperature of…

Mumbling obscenities, I got up, walked into the Family room where Cozy was again standing at the door. With another sigh I slid open the door, the wind again sucking more warmth from the house. This time Cozy actually went out. Hooray!

I slid the door closed and started to walk back to the office when I heard the sound of Cozy scratching at the door. Though we had cleverly put bells on the inside of the sliding doors, we’d never even thought of putting them on the outside, probably due to the lack of protruding handles on the outside of said doors. Thus, while the inside of the doors remained nice and fresh, the outside of the same doors looked as if a lunatic hobbit had tried to claw his way in with a garden trowel. Cozy, who had literally left the building only 10 seconds before now wanted to come in. My shoulders slumped as I stopped. While ignoring her requests to go out would mean continued annoyance in the form of perpetual bell ringing, leaving her outside was just cruel in this weather, though I’ll admit to thinking that she’d be just fine, what with her double insulated fur coat and all. I turned around and walked back to the door. As I slid the door open, Cozy trotted in, happy as ever to be back with her Daddy.

By now the whole house was probably 10 degrees cooler. The furnace kicked on as I slid the door closed.

“Cozy, go lie down.” She stared at me with her big brown eyes, clearly understanding what I was saying, while clearly feeling no urge to obey. Feeling the need to be in control, I commanded her to, “Sit!” She obeyed. Ha! I win!

As I started to walk back to the office, smug with the knowledge that I had the bigger brain and could boss my dog around, I was stopped dead by the worst sound since the 12-hour continuous rendition of Do You Know the Muffin Man as played by the mobile in Meghan’s crib when she was an infant.

As any parent will tell you, it is very easy to both love a creature with all your heart, and simultaneously wish them eternal damnation at the hands of the devil himself. Events like this try our patience, and make us understand that we really have no control in our own lives, which is a lesson everyone needs to learn at some point. Still, I wanted to kill her with all of the malice of a mother of triplets who hasn’t slept in six days when her husband that asks her, “Why isn’t dinner ready? I mean, what do you do all day, anyway?”

I turned around to look and Cozy sat there with her big eyes staring up at me. She was smirking at me – so help me she was smirking! She was being a mischievous little brat and she knew it.

Finally, I gave up, turned on the TV and sat down to watch, after which the wicked little she-devil padded over and put her big head on my lap. She didn’t want to go out. She wanted to be with me, and she wanted me on her terms. Cozy purred while I scritched her ears and the worries of the world slipped from my mind. Work, the continued news reports of the World Trade Center site, whatever I had been working on; it all just went away. Cozy had that effect on me. I think Cozy knew when I needed scritches too. Whatever her reasons, at least the infernal jingling had stopped.