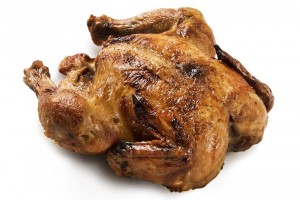 One fine Thursday not long after the spoon incident, Lauren put Meghan to bed as she did every night. From the time we brought Meghan home, putting her in her crib was a pretty simple affair because she was a good baby who would sleep soundly soon after bedtime. Though there was plenty of pre-bedtime reading and changing and such, bedtime proper was perhaps a ten minute task. Upon her return to the dining room, Lauren found the trash can tipped over and the elegant miss Daisy sitting on the floor chewing on the carcass that had previously been our chicken dinner.

Thanks to our obsessive research regarding all things dog, we knew that cooked chicken is dangerous for dogs if it contains bones. While a raw chicken wouldn’t bother them, the bones get brittle when cooked and cooked chicken bones, when chewed by a dog, can splinter making shards that can cut them up internally. This was a situation that we calmly categorized as not good.

Lauren pulled the chicken out of Daisy’s mouth and did a quick inventory of the remaining garbage. Her forensic pathology indicated that roughly half of the chicken was missing along with an entire ear of corn. Corn cobs are another danger because they are essentially indigestible, though dogs apparently have an insatiable desire to digest them, a problem I considered to be a basic design flaw of the dog. A piece of corn cob could sit in Daisy’s stomach for weeks or even months before passing into the intestines where, failing to break down, it could block everything, thus causing her great pain and possibly even death. Given this new development coupled with the constant heavy burden of knowledge, we upgraded the event to seriously not good. It would seem the duchess was not what she seemed since she was not beneath taking food from the trash when the mood struck her.

Having recently been through the wooden spoon incident, we were at first reticent to call the vet, but decided that eating cooked bones was much more serious than eating a stick. Lauren called the vet’s office.

“Hi, Daisy has eaten a corn cob from the trash along with the remains of an entire chicken – bones and all”.

“OK – is she showing any signs of distress?” This seemed familiar.

“OK then you can try to induce vomiting. Give her a cup of hydrogen peroxide and it will make her throw up”.

“OK Thanks”, Lauren said, then hung up the phone and told me what needed to be done.

The idea seemed simple enough so we went and got her bowl and poured in some peroxide. She looked at the bowl, looked at us, then turned and lay down with her head facing away from the bowl. I looked at Lauren and asked, “Would you voluntarily drink a bowl of peroxide?” She agreed that she would not. We called the vet again.

“Try a turkey baster and use it to squirt the peroxide down her throat.”

Brilliant! We got the turkey baster, loaded it up with peroxide and sat with Daisy on the deck while Cozy watched in fascination, no doubt thrilled that it wasn’t her, while simultaneously wondering why she wasn’t the center of attention.

As soon as we tried to put the turkey baster in Daisy’s mouth she turned away. If we tried to open her mouth she would resist. We couldn’t even get the tip in her mouth or get our hands in to open her mouth. It was almost as if the same idiot that had trained Cozy to dislike fingers in her mouth had also trained Daisy. Luckily I knew that idiot personally, and I knew he had never had the motive, opportunity, or desire to train Daisy in such a way. After all, Daisy rarely chewed on anything, let alone fingers.

Wikipedia defines cognitive dissonance as “the state of having inconsistent thoughts, beliefs, or attitudes, especially as relating to behavioral decisions and attitude change.” I had seen Daisy destroy a newspaper and completely consume a wooden spoon, but the “Daisy is royalty and therefore must be good” part of my brain believed emphatically that the Duchess would never deign to common trash thievery. My cognition, it would appear, was dissonant.

We managed to get peroxide on her coat, on the deck, on the deck chairs, on Cozy, and even managed a liberal application of the foamy stuff on ourselves. According to my measurements and precise calculations, Daisy consumed exactly none of it.

The score was now people with big brains that knew terms like cognitive dissonance and had opposable thumbs: 0, big dumb dog who ate from the trash: 2.

We called the vet again.

“We can’t get her to drink the peroxide.” I have to wonder if when they saw the caller-ID on their phones, the vet techs would shout out to the other staff, Hey it’s those Donahue knuckleheads with their big dogs again. Gather ’round and lets see what they’ve eaten this time. Of course they did nothing of the sort and treated us with the utmost respect and professionalism. I assume.

“Well if you can’t get her to vomit, give her some white bread and watch her for a few days. If there are any problems give us a call.” 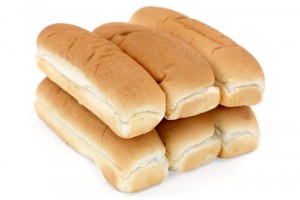 Great. We were back to the white bread problem. Once again, we had only hot dog rolls. Who would have thought that white bread, the bain of healthy eaters everywhere, would be such an important part of our canine emergency preparedness kit. I was starting to think that we should go buy two loaves of Wonderbread and put them in a glass case with a little hammer chained to the frame. The next time Daisy ate something improper we could break the glass and dispense the emergency rations as needed. Lacking any emergency Wonderbread, Daisy was again treated to a almost a whole package of rolls while Cozy scored one just for being a part of the team. We cleaned up the mess and proceeded to wait.

Daisy passed the chicken bones without issue over the next few days. I know that because we examined every pile of poop for a week. If ever we meet, you can thank me for sparing you the details, but for now I will simply say that the bones came out while the corn cob did not.

It was during this week of anxious poop-sorting that we came to the conclusion that Cozy had never eaten anything she wasn’t supposed to. The remote controls, the spoon, the newspaper, the corncob, the chicken, and who knows what else had all likely been the work of the thieving Miss Daisy who, while masquerading as The Duchess, was a closet chewer who enjoyed either consuming or destroying anything that caught her fancy. By day she was a proper lady – Daisy,  Duchess of Newfoundland. By night she was the midnight trash hound and destroyer of beloved electronic devices. You would never have known it to look at her. She was a master of her craft, and it had taken us almost two years to discover her secret while Cozy had wrongly taken the rap for the remote controls and most anything we found destroyed. Daisy was quite the smooth operator.

A month after the trash incident, and shortly after we bought a dog-proof kitchen trash can, Daisy started the rolling stomach and grunting that every dog lover recognizes as the signs of impending vomit. We watched as she threw up not only what was left of her breakfast, but a black rotting two inch long chunk of round corn cob. For a month this thing had fermented in her stomach, until she had finally felt the need to get rid of it. I was at once both fascinated and repulsed, slightly more the latter to be honest, though I really think that she had held on to it for as long as possible in order to maintain her cover as a good dog.

At long last, with Daisy’s regurgitation of the final piece of rotting vegetation, my Cozy’s good name had been restored. I went to give her a hot dog roll in celebration, planning to secretly give her one without Daisy knowing about it so as to celebrate Cozy’s newfound innocence though, for some strange reason, there was not a single hot dog roll to be found.