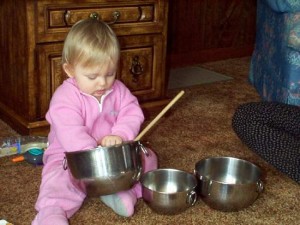 Lauren was sitting outside on the deck enjoying the summer breeze while Meghan played with the latest high-tech toy: a pot and some wooden spoons. As Meghan happily sat on the deck banging the pot with her spoons, the dogs lay lazily about, content to be with their family on such a fine day. Meghan didn’t seem to care that her drum set wasn’t being advertised non-stop on the TV, nor did she mind that these were last year’s spoons. She was as happy as a kid could be, making noise and having fun.

Young children are naturally very good at some things. Banging pots with a wooden spoon is one of them. Making poopy diapers is another, and let me tell you, when it came to this particular skill, the kid was a pro. Noticing that the pro had scored again, Lauren scooped Meghan up and headed inside to clean her up. The dogs evidently decided that they’d sniffed enough diapers for one day and remained contentedly in the sun. If a loaded diaper wasn’t reason enough to disrupt a snooze of this caliber, nothing was. Or so we thought.

When Lauren came back out, she put the ever boisterous and significantly less fragrant Meghan back in her spot so that she might conclude her set list. The concert had hit a snag though, as she discovered that last year’s spoon had somehow gone missing. While it may have been an old spoon, it had a certain timbre unlike any other when struck upon a well tuned stainless steel drum. It was a Stradivarius among spoons, and as such it was priceless, though perhaps equally as importantly, it was the only wooden spoon we had. While the spoon was magic in the hands of a virtuoso like Meghan, we were pretty sure that it couldn’t walk away on its own.

Lauren looked over at Cozy who didn’t even deign to raise her head to look back seeing as how the snooze was indeed epic, as previously reported. She then looked over and saw the unthinkable: Daisy diligently chewing Meghan’s Stradivarius-like spoon into splinters. Daisy was destroying the fine instrument with the same focus that she had displayed while shredding our Sunday paper back in the halcyon days of unmolested coffee tables. Lauren pulled what remained of Meghan’s prized instrument out of Daisy’s mouth and examined it in amazement. Lauren found herself holding what now amounted to a four inch long splintered stick that only the finest forensic analysis could have compared to a 12-inch long wooden spoon.

Diaper changing was a skill that required less time as we became more proficient, and by we, I mean Lauren. Still, the stick was more than half gone after Daisy had been alone with it for all of five minutes. Lauren looked around but found no remains except for some small splinters on the deck. We figured that Daisy had eyed the wonderful treat in Meghan’s hands for some time and, good girl that she was, waited until Meghan no longer had it in her possession at which point she took it for herself.

Being the new parents and dog owners that we still were, we called the vet.

“Hi our dog just ate half of a wooden spoon!”

“Don’t worry about it – dogs eat sticks all the time.”

“But she ate most of an entire spoon! Won’t the splinters tear up her stomach?”

“If you’re worried about that give her some white bread and it will help coat the pieces so they won’t hurt her.”

“We only have whole wheat bread!” We were trying to keep healthy food in the house after all.

“Do you have any hotdog or hamburger rolls?”

“I think so.” Our healthy eating only went so far as to prevent us from eating normal white bread. A hot dog on a wheat bun? C’mon.

“Give her some of those and she’ll be fine. If you see her in any distress give us a call back.”

We were two bright, young, parents and pet owners who’s dog had just eaten what was essentially a stick. Had Daisy chewed up a tree branch in the back yard we wouldn’t have given it a second thought, but a spoon? Tragedy. Meanwhile, we were also concerned with the fact that we were terrible dog owners because we only had wheat bread in the house. Seriously, who has these kinds of problems?

So we gave Daisy hot dog rolls. Of course if Daisy got hot dog rolls, then we had damn well better give some to Cozy, too, because if there’s one thing that will wake a Newfoundland from an epic slumber on a warm summer day, it’s the sound of the other dog getting fed. Between the two of them they ate an entire pack of hot dog rolls which made them very happy dogs that day, even if we did have to have our hot dogs naked on a plate for dinner that night. From the viewpoint of a dog, I would have to think that eating half of a pack of hotdog rolls after enjoying the fine texture and fruity bouquet of a rare handmade instrument like Meghan’s wooden spoon would make for a pretty satisfying afternoon.

A thought started to germinate in my brain that day as I started to wonder if Cozy had really been the one to destroy all the stuff that had been destroyed. It would seam that Daisy was the one we had caught redhanded not once, but twice. Nah…

Meghan was saddened by the loss of that most perfect of pot-banging spoons, but she quickly adapted and found some other thing with which to make noise. Kids are resilient in the face of adversity, especially the serious type involving missing spoons.

As for our concerns over Daisy and the possibility of digestive trauma from eating the spoon, so far as we know she didn’t even burp let alone suffer in any way, probably because she was a dog who ate a stick.