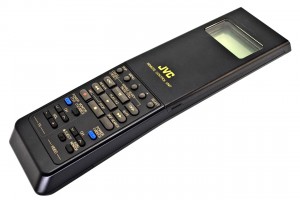 Back before the days of wedded bliss, having dogs, or even the existence of DVD players, I had come into some money and bought a very nice 27” JVC TV and a matching VCR. Each of these items had cost me over $800 and at the time were about the most expensive things I had ever bought. By the time we had Cozy and Daisy living with us, these devices were each probably eight years old, but since High Definition television was still many years away, they were both still used daily. Used, I might add, with a certain amount of nerdy pride since they were still pretty great devices.

The VCR was a top of the line model (circa 1989) that had a wonderful remote control including a large LCD screen that kept the time so you could program the VCR when the power failed. The remote had two levels of buttons with a very cool plastic door that would open to reveal an additional level of controls. It was a masterful piece of geek technology that I really enjoyed using. It was a remote among remotes. It was sublime.

Like most upper middle class Americans in the tri-state area at the time, we had cable TV in multiple rooms, though at the time we only needed a set top box on one of the TVs. The TV that we watched most often was in the family room which was downstairs by the entrance leading in from the garage. The dogs would often lie down there during the day because of the cool tile floor which was on top of the house’s cement slab. This was the room from which we had observed the petsitter via Newf Cam, and it was the same room in which Daisy enjoyed reading the paper.

One day Lauen and I had gone out for some fun as young childless married couples are known to do. After all, we wouldn’t be able to do so for much longer since Lauren was now getting progressively more pregnant. When we got home from our adventure, the dogs greeted us at the door wagging furiously according to routine. Everything in the house seemed to be in order which was a miracle given Cozy being unrestrained, un-drugged, and otherwise her normal self.

Maybe my Cozy was growing up.

Smug in our ability to train a well behaved puppy, we decided to watch some TV. Walking into the family room I saw an odd pile on the floor which, upon closer inspection, resolved into the remains of a small LCD screen. My brain clicked through the known devices which might contain such a small screen until it locked onto the only logical match. I was staring at the crushed remains of the screen from my favorite VCR remote.

I looked around and found the plastic door from the remote, replete with teeth marks and slobber. I looked around some more and found a battery. Suddenly I became concerned that Cozy had consumed the other battery, which could be a serious problem that might involve surgery to resolve. Growing more concerned I renewed my search in earnest, after which I found small piles of shrapnel from my remote, little plastic buttons, thousands of shards of ruined black plastic, and finally, the other battery.

Cozy sat in the corner with her head hanging low and a very pathetic look on her face. She knew she was in trouble and that the time for wagging was over. She knew what she had done was wrong. Yet still, she had done it which, of course, meant that we weren’t such good trainers after all. I was just relieved that she hadn’t eaten the batteries, so I went over and patted her on the head and told her that it was OK.  I packed up the pieces of my shattered remote control and put them in a box so that I could mourn its demise in my own way. I don’t think Lauren ever truly understood the magnitude of my sadness at the loss of the most wonderful of remote controls, but she too was glad that Cozy was unharmed.

We had been warned by Linda that Cozy and Daisy were both likely to have had the remote control gene, but we foolishly disregarded such obvious nonsense. Of course, Linda had spent years studying genetics and breeding, so I’m sure she knew exactly which dogs would inherit any trait we could name. Just because science didn’t recognize a DNA marker for the willingness to consume remote controls didn’t mean that it wasn’t  there. There were more things in Heaven and Earth, it would appear, than were dreamt of in my rigid scientific mind. 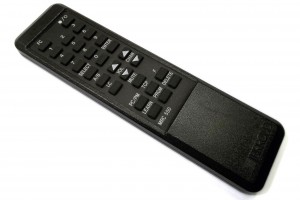 A few days later we went out once more, and again when we got home Cozy was looking guilty. Oh boy. I took a look around fearing the worst. Once again in the middle of the floor, was a nice pile of plastic debris. Upon closer inspection and some considerable forensics, I determined that this was the remains of the cable box remote.

Once again we were relieved to discover that all of the batteries were accounted for, as were all of the plastic bits, rubber parts, and associated shards, at least as far as my considerable reconstruction efforts could prove. 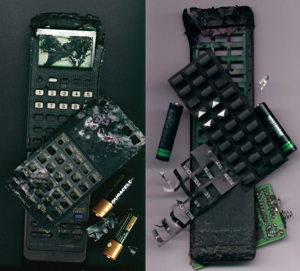 We learned a valuable lesson that week: Anything that’s at couch level or below is fair game for the dogs. All remaining remote controls enjoyed their new home on the shelf by the TV when we weren’t using them. Sure, we now had to get up to use the remote which offended my “why do we even have a remote control, then” sensibilities, but I conceded that standing in front of the TV while using the remote was better than waiting to find out if the surgeon had found the batteries in Cozy’s stomach.

We also continued to pay two dollars a month to the cable company for quite some time, since neither of us were willing to admit to them what had happened. Sometimes it’s just better to ignore the problem and keep paying the fee.

Something nagged at me about the entire affair, but it wouldn’t come to the forefront of my mind again for many months to come.