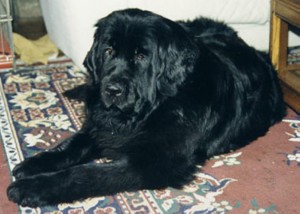 One fine night Lauren and I decided to sit and watch a movie. Lauren was five months pregnant with our first baby, and we were trying to enjoy as much “us” time as possible before our lives were turned upside down.

As we settled in to watch the movie, we heard an odd sound from behind the coffee table. I got up to investigate, naturally expecting giant spiders or robotic invaders, only to discover Daisy sitting with a newspaper on her paws. I kept a pile of old newspapers by the fireplace to help start fires in the winter, and apparently Daisy had something else on her mind regarding the fair use of these papers. She had pulled one off of the pile and was sitting there methodically tearing the newspaper to shreds.

I couldn’t believe what I was seeing. Daisy never got into trouble, she never did anything wrong, and she was always the consummate lady. She always seemed to look down her nose at Cozy’s shenanigans, and here she was being naughty out in the open. The Duchess, it would appear, had a wild side.

She would start at one side of the paper, grab a piece, tear it into a strip, then shake her head to get the strip off from the rest of the paper. She wasn’t eating any of it;  she was destroying the newspaper for what appeared to be the sheer joy of it. I sat there watching, amazed, as Daisy systematically destroyed the paper, strip by strip. It was somehow unsettling.

I called Lauren over to see, and Daisy kept going as if we weren’t there. Nothing seemed to matter to her except the destruction of the newspaper. Grab, tear, shake, repeat. Strip after strip, she tore the paper to shreds until she was sitting amidst a pile of ruined paper. The more she tore, the more content she seemed to be. She was lying down, very ladylike with the paper between her paws, surrounded by the confetti-like fruits of her labor.

She was so focused that she stayed there long enough for me to get the camcorder so I could record her after getting her a fresh section. We called her name and her tail thumped once in acknowledgment, but she didn’t stop her compulsive tearing. It was fascinating to watch. Even Cozy looked on, probably wondering why Daisy wasn’t getting into any trouble for her willful destruction of property. Cozy even threw her Kong at Daisy in an attempt to distract her from her revery, an attempt that only worked when the Kong made noise bouncing off of something behind her.

Finally, I got down on the floor and took the newspaper from her which broke her concentration. She looked up at me with a glazed look in her eyes and then, as if suddenly recognizing us, wagged, got up, and padded over to Lauren for some love as if she had just walked into the room.

We have no idea why Daisy took to rending the paper. Part of me wonders if Miss Daisy had been secretly reading the paper while were weren’t in the room and perhaps she had read a column that she disliked. With no way to mail in a proper letter to the editor, perhaps she had focused her frustrations on the paper itself. If I could prove that Daisy could read, we could make millions! I started compiling a mental list of the talk show hosts that I thought would invite us and out literate dog.

The next night Daisy was sitting on the tile floor like the perfect lady that she was. Being the scientific type, I retrieved a newspaper from the pile and placed it on her paws to see if she would read it. She looked at me as if to say seriously? I told her it was OK and she went to town, methodically tearing the newspaper to shreds with abandon. So much for the talk show circuit.

We never understood her motivation for tearing up the newspapers. It seemed harmless since she wasn’t actually eating them, and besides, it wasn’t like she was eating remote controls…