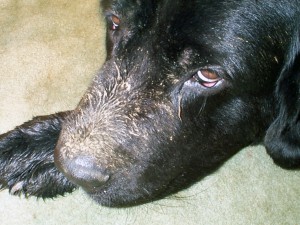 Cozy liked to dig. She was a dog after all, so that shouldn’t have been a surprise, but what surprised us was the size of the holes. While we expected digging, we had not reasoned through the fact that big dogs meant big holes.

The reasons for Cozy’s excavations were also not obvious to us. She would be outside in the yard and suddenly just start to dig and within minutes there would be a hole large enough to cripple a horse. Luckily we didn’t have any wild horses passing through our yard, but still, the holes were a menace to navigation for those of us who did traverse the yard.

For Cozy, digging was an obsession. While digging, nothing mattered to Cozy but the hole, and by God, the hole in question wasn’t wide nor deep enough. We would often find her outside in a hole-digging trance, her entire head beneath the surface of the Earth as she sniffed out the next stage in her tunnel.  When I’d yell her name from the deck she would stop, pull her head from the hole, look up at me with a far-away look in her eyes, then stick her head back in the hole and resume the task at hand. Cozy was an artist driven mad by a singular vision who happened to use our yard as her canvas.

From our point of view, the holes seemed to serve no obvious purpose. She never buried anything in them, she never retrieved anything from them, and she never felt the need to fill any of them. Each day she just needed to have larger, deeper, more impressive holes than the day before. Either that or she could smell the alien spacecraft that was buried under our house. I had suspected such an underground secret since the day I finished Tommyknockers, but I’d never found any proof aside from the odd fact that I’ve never been able to drive a ground rod into the dirt for more than about a foot. I think that Cozy knew the truth about whatever lay beneath the soil, however shocking it may be, and our silly rules prohibiting canine excavation weren’t going to stop her from exposing it.

While regaling friends and family with stories of the holes in our yard was fun, mowing the artillery testing ground that my back yard had become was not. Since we lived on over two acres of land, I had a large Wheel Horse garden tractor with a big motor, huge wheels and solid cast iron axles, and by “large”, I mean not as big as the one I wanted. 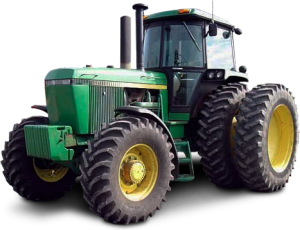 Between mowing for hours each week in the summer, plowing snow in the winter, not to mention the general hauling needs of someone who lives in the woods, a tractor is a necessity where we live. Though Lauren agreed with the necessity of owning a tractor, what she didn’t agree with me on was the size, horsepower, color, torque and overall displacement of the machine, or as she succinctly phrased it, the price. As a result, my garden tractor wasn’t quite as large as one that I had originally envisioned, but to be fair having grown up on a farm I had envisioned quite a lot. Lauren had said, “no” to the big machine due to something about us not being able to eat if we bought it, so I tried not to be bitter about the fact that I couldn’t crush cars with my paltry, smaller, and in my eyes slightly feminine tractor.

If I wasn’t careful while mowing with the slightly smaller mower that I was railroaded into buying by my lovely wife who had only our best intentions at heart, the rear tires would fall into the holes. If I was lucky and it was a smaller hole, the tractor might hesitate a bit, catch some traction and then crawl out. The bigger holes, however, were more of a hazard, both to the tractor and to my sanity.

I kept a pretty keen eye on the hole positions, but every now and then I’d forget and one of the back tires of my almost manly though small tractor would fall into a large hole with a loud thump. While the tractor was large(ish), with the mowing deck attached it had a pretty low ground clearance. If the hole was deep enough, the wheel would fall into the hole and the tractor would list both starboard and aft, precariously teetering on the edge of the hole. With the mower at this angle, the cutting deck would crash onto the edge of the hole, the blades now attempting to cut into the dirt instead of the grass and since dirt is thicker than grass, the blades would catch into the rim of the hole and the mower would stall. Profanity would lubricate the process as needed. It was always needed.

When the mower would crash into a hole in this fashion, I would unleash a string of expletives that decorum prohibits me from describing here. Suffice to say that I would wish eternal damnation on she who had wrought a hole such as that in which I was trapped, and whilst conjuring up such incantations, I would also sprinkle in various epithets and expletives regarding she who killed my dream of manly large tractor bliss. None of this helped me get the tractor out of the hole, but at least the world knew that I was unhappy with my predicament. As you might have guessed, most everyone left me alone while I mowed.

If I refilled the holes, Cozy would dig them up again. If by some miracle she did not, then the loosened dirt that I put back into the hole would sink in the rain leaving a shallow dent in the ground that was irresistible to a junior Newfoundland with a digging complex, and so the hole would be reborn. When Cozy started a hole, it  remained forever a hole.

One hole in particular became Cozy’s favorite. This hole wasn’t particularly wide, but it was deep. She had dug down deep enough that she would pull out bright red clay on days that it wasn’t filled with water, and she had managed to get the hole so deep that she couldn’t reach the bottom unless her head was also in the hole. She would sometimes get her head and paws in the hole, only to get briefly stuck. She always managed to get herself back out, but it was a pretty funny spectacle none-the-less. 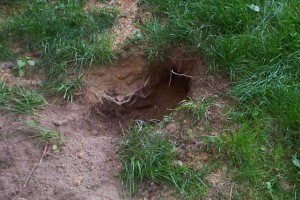 This hole was especially wonderful due to the fact that it filled with water in the rain. Nothing makes a purebred Newfoundland hole-hound happy like a freshly dug hole, that is except for a freshly dug hole that retains water. To see her pawing out the muddy water before she got to the lower layer of mud, all the while reveling in the fact that she was out in the rain was to see a Newfoundland in water-mud-hole heaven.

We had no idea why that hole was her favorite. Maybe there was something wonderful down there like a coffee can full of gold Krugerrands, A T-Rex skeleton, or an alien spacecraft. Maybe the cockpit of said spacecraft was right there and that’s why Cozy chose that spot. I decided that some things were better left unknown, so I left the hole for Cozy’s own enjoyment, and since it was her favorite, we dubbed it “The Cozy Hole”, a name which, like the hole it describes, endures to this day.