We visited my mother and her husband David in New Hampshire for thanksgiving in 1998.  My mother had moved there with her then new husband back in 1984 and I had made the trip once or twice a year since then with one of those trips always coinciding with the Thanksgiving holiday. Traveling the 350 miles by car was usually a six to eight hour experience that could range from boring to fun depending on who was in the car, and this trip was surprisingly uneventful given the fact that we had almost 300 pounds of dog in the back of the Subaru.

Since we had two slobbering beasts stuffed into the car with us, we stopped often to let them out so they could walk around, relieve themselves and enjoy some time doing anything other than being stuffed into a car. Come to think of it, those were the same reasons that we usually wanted to stop. After what seemed like 384 hours on the road (it was seven) we arrived safely, setting a personal record for the most stops caused by the need to clean drool off of the back window (four).

Once we got there, the dogs made themselves at home in my mother’s house which was small at about 900 square feet. Four people and two giant dogs was a lot to stuff into that little house, but we managed. Luckily, Daisy did her part by electing to sit on the couch whenever possible, thus freeing up space on the floor for we peasants. 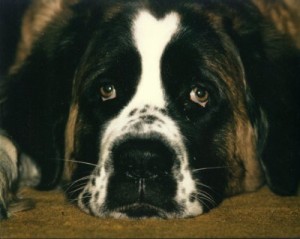 My mother had always prided herself on having a very clean house and she ran a tight ship. While growing up, we had very strict rules for Brandy, our Saint Bernard. For example, Brandy was not allowed in the kitchen while we ate, though she could watch from the bordering laundry room. Brandy was smart enough to figure out that so long as she kept one paw in the laundry room, the rest of her could be in the kitchen. The rules were strict, and shenanigans were not tolerated.

When we arrived in New Hampshire, I had naturally expected the same rules to be in force. On the first night there I witnessed my mother — the enforcer — feeding Cozy and Daisy mashed potatoes off of a wooden spoon in the kitchen. My mother was scooping mashed potatoes from the pot on the stove, and was feeding the eager, wagging dogs as if they were hungry children from a Dickens novel. Cozy and Daisy were sitting with rapt attention, taking turns licking the spoon while drool pooled on the floor beneath them. I was dumbfounded.

I expected Rod Serling to step out from the bathroom explaining how I was traveling through another dimension. Who was this woman that looked so much like my mother? When I was a kid, I wasn’t even allowed to lick cake bater from the bowl because my mother was afraid that I’d get salmonella from the raw eggs. Now she was double-dipping a wooden spoon into our mashed potatoes after sticking it into not one but two slobbering dog’s mouths. My logical mind suffered from a stack overflow condition trying to evaluate the sheer number of longstanding rules being broken by the very founder of those rules. Either my mother had gone insane or I had.

Somehow the fundamental nature of the universe had changed and I had not received the memo. Apparently, Cozy and Daisy were as close to grandchildren as my mother had yet seen from us, and as such they were granted all the rank and privilege one would expect from a doting grandmother. Either that or she was an android copy of my mother sent from an orbiting alien spacecraft, the likelihood of which seemed equally probable to me given the mental disability I had incurred trying to reason though the scene at hand. 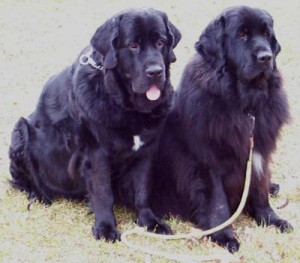 It had not yet snowed when we arrived, but being November the weather was cold and clear. Much of the glorious New England foliage had fallen, and the ground was covered with colorful leaves. The day after the mashed potato incident, we put the dogs in the front yard and took a series of pictures with my exciting new camera, a state-of-the-art 1.2 megapixel Kodak DC120. Compared with my film camera it took lousy pictures, but back then digital cameras were cutting edge, and the ability to put a picture on a web page without using a scanner was a pretty big deal. Being the early adopter super-nerd that I am, I naturally dove in whole-hog, buying not only the camera but a massive 32MB compact flash card as well, and yes, that’s megabytes, not gigabytes. It was 1998, remember. 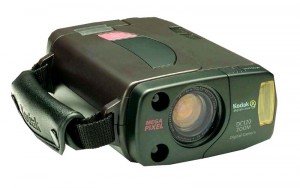 If you don’t recall what a Kodak DC-120 looked like, it was basically like carrying a brick around that took pictures as it consumed four AA batteries roughly every 14 shots, all the while giving onlookers the clear impression that the operator was a big fat dork. It was the first widely available megapixel (as in one) digital camera and retailed for about $1000 when it was new. It was also an absolute necessity for someone who’s natural propensity for dorkiness broke the meter. I bought the camera on eBay in 1998, a fact for which I offer up if you missed the fact that the dork in question was me. 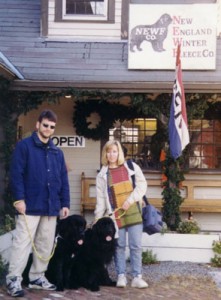 While in New Hampshire, we visited a little store called “New England Fleece” which was shortened on the sign to NEWF. The sign even had the silhouette of a Newfoundland dog on it. We brought the dogs and managed to attract a small crowd while we took pictures of the dogs under the sign bearing their likeness. This was New Hampshire, remember, so by “small crowd” I mean two or three people, one of whom was nice enough to wrangle the goofy camera for me while we posed for the shot.

Back in the house my mother further enjoyed being a grandmother to the dogs. When Daisy jumped up on the couch to sit where she felt that she belonged, I naturally told her to get down. My mother replied “That’s alright; she’s not doing any harm.” I’m rarely speechless, but I found nothing clever to say to my robotic alien mother, probably due to my fear that if I ruined the illusion she would pull out a ray gun and vaporize us all. I wasn’t even allowed on the couch as a kid! 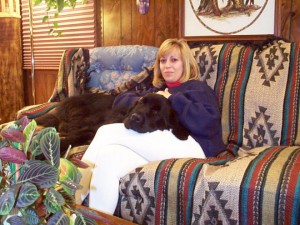 Growing up, Brandy wasn’t allowed out of the laundry room because of the dog hair. On the rare occasions that she could come and sit with us in the carpeted living room, my mother would vacuum up the hair the moment Brandy left. Now I was supposed to believe that the same woman was letting one of my shaggy dogs lie on her beautiful clean couch? Maybe my alien theory was mistaken. Perhaps my mother had made this simulacrum so that she could work on her cold fusion experiments in the basement undisturbed. Maybe she wasn’t just an alien, but an alien android! I made a mental note to check out the basement the next morning because at this point there was no way I was going down there in the dark.

After dinner we all chatted in the living room while my scheming alien android mother offered up pumpkin pie. The scene was a page right out of a Norman Rockwell painting. You know, if paintings had pages, which I was pretty sure they did, but to be fair my head hurt from all the rampant conjecture. Cozy enjoyed her slice on the floor while Daisy had hers hand-fed to her on the couch.

After pie, I busied myself offloading the digital photos from my camera while we all settled into the post-dessert routine common in small New England towns. It was a clear November night, the stillness punctuated by the distinctive sound of a lone Whip-poor-will perched in a nearby tree. It was beautiful, it was serene, and it was everything you’d expect from a Thanksgiving trip to Grandma’s house.

I was starting to worry about Mr. Serling. He was overdue.