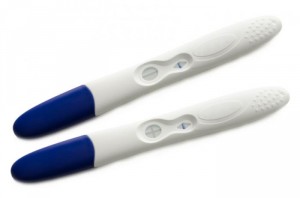 The dogs had known that Lauren was pregnant before we did. I’m also sure that they knew we were never pregnant – only Lauren was. Daisy, having had litters of puppies before her retirement seemed especially intuitive regarding hormonal events such as pregnancy. Cozy just seemed to go with the flow for the most part;  Daisy was the natural midwife.

We had gone through this once already. As soon as Lauren’s body started changing in order to grow a new baby, Daisy would know, and even before we knew Daisy would start acting strangely. As Lauren would try to walk down the hallway, Daisy would walk in front of her, then stop and turn around in circles, almost as if she was trying to make a bed for Lauren. Daisy would become very attentive and be with Lauren constantly to the point of annoyance. When Lauren miscarried the first baby, Daisy lay on the couch with Lauren while Cozy and I looked on helplessly. Daisy had been there, and she knew just what Lauren was going through.

The second time Lauren was pregnant, Daisy was again the first to know, and proceeded to make beds wherever Lauren tried to walk. She also would jam her nose into Lauren’s crotch constantly, which could be inconvenient to say the least. These behaviors were cute when Lauren was only one month pregnant, but a 130 pound dog walking in circles in front of a nine-month pregnant and cranky woman was downright dangerous.

Cozy did her part in her own special way. One day while enjoying some leftover pizza in the kitchen, I gave some crust to Cozy like I always did. This time instead of swallowing the treat almost whole, she took it and ran off into the other room. We had seen this behavior before, but usually only when we gave them bones or pig ears. With such treats they would each find a quiet spot to enjoy their prizes without having to fight each other off. Pizza crust had always been an eat it now treat though, with an unspoken truce in place similar to the one that allows predator and prey to coexist at the same water hole in the Serengeti.

After a few minutes she came back and begged for more, her begging consisting of staring and drooling. Curious as to what she might be up to, I gave her another piece and followed her as she ran from the kitchen. Cozy sneaked into the living room, and with a furtive glance that accomplished nothing since I was right there, stepped up onto the couch. Cozy never climbed on the furniture, so I was already intrigued. She then took her precious pizza crust and shoved it between the seat cushions. Apparently unsatisfied with its placement, she nudged it with her nose until it was completely buried in the couch.

I walked into the room and Cozy, looking like a teenage boy having been caught with an illicit Playboy, sat down in shame. Patting her on the head I asked her with my good-girl voice, “What are you doing Cozy Bear?” She stared back at me with her best nothing face.

I went to the couch and pulled out the soggy crust and gave it back to her. She looked at me like I was an idiot, then grabbed the crust and buried it in the love seat, since her couch-hole had been discovered. Fascinated, I pulled the crust out again and gave it back to her. She snorted her irritation at me, then took the crust and buried it back in the couch. I called Lauren and showed her Cozy’s new trick. We were simple folk and this was better than T.V.

At Lauren’s request, I pulled out the seat cushions and we found a nice cache of pizza crust, dog cookies and other hairy drool-sodden treasures. Cozy, it seemed, was stockpiling her den for the coming puppies. Cozy snorted her contempt as I took all the old food from the couch and threw it out. She had stashed all sorts of treats for the future and here I was ruining our chances for survival by emptying her cache. Imbecile!

With the couches cleaned out, we started to properly prepare the house for the new arrival. We bought all the proper furniture with all the proper safety features. We painted the baby’s room and hung up stickers and baby-stuff on the walls. I put together cribs and basically did whatever Lauren told me to do. As much as Cozy knew that hoarding food was key to the pack’s survival, I somehow sensed that obeying the pregnant one was key to my own survival. Now that Cozy’s food-hoarding plan had been foiled, she helped by lying down in the middle of whatever I was doing.