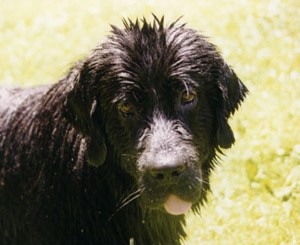 A well groomed Newfoundland dog is a majestic animal. Their shiny coats glisten in the sunlight and they seem to exude power, grace, and nobility. A soaking wet Newfoundland dog is the very image of the pathetic drowned rat. Their voluminous coat lies flat on the skin, and their long fluffy tails attain the appearance of being thin, pointed and dare I say, scaly.

It gets surprisingly hot in New Jersey, and we didn’t have central air conditioning. We did however have a hose, and we would have great fun hosing off the dogs in the midst of hot summer days. It could be a challenge getting a Newfy wet enough to do their rat imitations because their coats were very water resistant but persistence and good aim won every time. 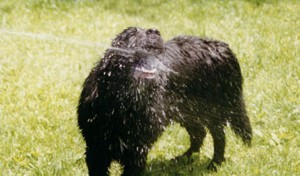 Cozy would usually try to eat the hose spray, which would really just add justification for me spraying her in the face, which she loved. After getting a face full of water Cozy would bolt from one side of the yard to the other and then come racing back for more sprays. Daisy was much more the lady, and would stand still while Lauren soaked her down. Once Daisy was sufficiently wet and cool, she would find a nice place to lie where she could watch Cozy be Cozy. It wouldn’t have surprised me in the least to see Daisy sitting with Lauren on the bench, each of them enjoying a refreshing iced tea while they chatted about life.

On some days we would turn hose time into bath time. Washing a dog is always good for a story, but washing a 160 pound ill-behaved, slippery, wet dog, well that’s a whole ‘nuther kind of fun.

Outdoor bath time was Cozy’s chance to get us as wet as possible, and she was a master. She would wait until her fur had soaked up the maximum water physically possible, then she would shake. Though hard to soak, once her coat was wet, I’d say she could sling a good bathtub full of water in all directions at once. This of course soaked both Lauren and me, which would make me let go of Cozy, which was her signal to run around the yard like an idiot. I would then have to catch her and bring her back to the hose for the most horrible of all dog experiences: the soaping. 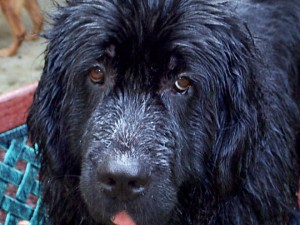 Daisy would allow us to lather her up without any problem. She looked pathetic and sad the whole time, but she suffered the indignity willingly. She would be done quickly, then once pretty and sweet smelling, she would sit in the sun in order to watch the show, no doubt wondering when the iced tea would be ready.

Cozy was less dignified about the entire affair. I would have to hold her collar while Lauren would pour on the soap. We used pet shampoo that smelled nice, so at least we had that going for us. We would have to sandwich Cozy between us in an effort to prevent her from bucking like a wild stallion. This rarely worked, and as a result we would both be soaked and foamy from the waist down which led us to start wearing swimsuits for bath time. Getting the soap through the double coats and to her skin was even more difficult than getting her soaking wet. We would both have to lather and scrub, one of us taking her head, and the other getting her butt. 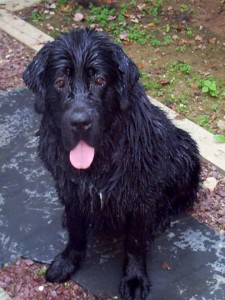 Cozy didn’t like having her butt washed. Maybe she was shy, or maybe she was just the spawn of Satan. Either way it was a problem. She would squirm, and she would writhe, and she would generally be a pain in the ass. She quickly learned how far the hose would spray, and when she would escape – and she always escaped – she would stand right outside the maximum firing range of the hose. These were the days when I would threaten to add Cozy Burgers to our dinner menu. She could always tell I was bluffing though, clever girl that she was.

We decided that as proper water dogs, they needed a pool. Actually, Lauren showed up with a pool one day so I guess “we” decided, though I fuzzy on the details. At any rate we blew up the plastic kiddie pool while the dogs watched. Cozy tried to help but once again her lack of opposable thumbs frustrated us all.

Having finally inflated the tubes surrounding the small pool, we put the hose in and let it fill. Cozy, determined to drink all the water from the hose before it could get to the pool , tried valiantly until she could drink no more.  She then thumped to the ground with a snort and watched, clearly annoyed that she had lost the battle with the hose.

When the pool was finally filled we let them in. Cozy leapt the side and stood in the big water bowl and proceeded to drink some more, no doubt happy to have the last word over the hose. Daisy simply stood outside and watched Cozy play the fool. Finally, Lauren went over and gently led Daisy into the pool where she dutifully stood, her feet nice and wet. Now everyone was cool, or at least their ankles were. I remained dry in order to take pictures.

For fun I threw a small rock into the pool to see what they would do. Cozy plunged her whole head into the water, grabbed the rock and gently placed it outside the pool. Cool! Apparently Cozy knew that rocks couldn’t swim. I grabbed another rock and watched, fascinated, as Cozy saved it too. Upping the ante, I grabbed a handful of rocks and tossed them in.

Now I like to think of myself as a smart guy, but this day my intelligence was perhaps, shall we say, questionable. Cozy watched all the rocks sink to the bottom, and unable to save them all, did what any rescue dog would do – she pawed furiously at them all. As I saw her pawing, it finally dawned on me, that perhaps this $3.99 plastic pool would not be able to stand up to the vigorous lifesaving efforts of a large, crazed, Newfoundland lifeguard.

Before I could react, the pool started leaking at an alarming rate, releasing a steady torrent of water from the bottom which flowed down the gentle slope in the yard to where I was standing. Cozy kept pawing at the rocks, one by one grabbing them in her mouth and depositing them outside the pool. Finally, with all the rocks safely rescued to dry land, she looked up at me with pride, the empty pool collapsed around her feet. The image before me was quite the perfect metaphor for my life.

We decided that buying a cheap inflatable pool wasn’t very smart, so we invested in a more robust pool that didn’t inflate, but rather had a stiff outer shell. This one took a little bit more effort to set up since the force of the water within the pool kept the sides up. Being the educated and well-read people that we were, we got it up in no time.

Cozy leapt into the pool, ready to rescue any rocks that should find themselves in peril. Daisy gently walked in with a royal air, again willing to get only her feet wet for a bit. A lady has her dignity, after all. 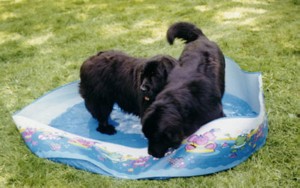 After a few minutes of thorough Newfy testing, we determined that this, the more expensive kiddie pool at $14.99, was also not suitable for 300 pounds of dog, for though the side of this pool was more durable, the bottom was still a thin layer of plastic. Apparently the pool designers didn’t take into consideration the possibility of children with long sharp claws or two inch canine teeth. Additionally, it would seem that the pool designers completely ignored the very real possibility that the bottom of the pool was the weakest point for these fanged children. How the rock got into the pool is a mystery yet to be  solved. All we know is that there was a rock that needed saving. Cozy, ever the hero, did what any hero would do: she saved the rock. 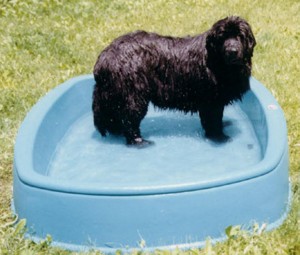 It took us three pools, but we finally decided to get a hard plastic kiddie pool. We went to one of the big chain toy stores and bought the biggest, hardest plastic pool we could find. This pool was about seven feet long by about four feet wide, and it even had a slide moulded into one side, though sadly they had both outgrown slides.

Luckily the dogs never grew opposable thumbs or started using tools. As a result the third pool stood up to claws and teeth for years to come, allowing a great many rocks to be saved.