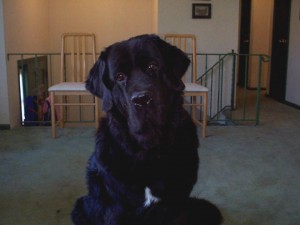 Cozy was a very vocal girl, and she would often talk to us with a string of woos, growls and wufs, all put together as if she was trying to articulate some form of language. My youngest daughter Colleen imitated people talking in a similar manner from the moment she could make sound. We have videos of her in her high chair babbling at us with all the inflection of a grown adult, even ending her requests with eeeeeese adding a tilt of her head for dramatic effect. Though Colleen had not yet been born, looking back it seems to me that Cozy was trying to do the same thing. She would have complete conversations with me but lacked the cognitive ability (or maybe just the lip structure) to form accurate syllables.
Cozy talking to me

I recorded a couple of these conversations and while Lauren was listening to one of them she noticed what sounded like Cozy saying I love Lauren. I played it back and processed it further on the computer and I’ll be damned — it did sound like Cozy was declaring her love for Lauren! This was even funnier since we were pretty sure Cozy saw Lauren as someone who vied for my affections. Lauren was the giver of meals though, so who am I to say who Cozy loved?

Cozy would often walk up to me, sit down, and stare. Eye contact is an important part of dog communication, but it’s usually used as a form of dominance. For example, Alphas usually hold a stare while submissive dogs look away. This was different though. Cozy would stare at me not with aggression, but with a quizzical look. This look meant that she had something to say and it was my job to figure out the message. Cozy and I had worked out a system of communicating that involved m asking a series of questions while gauging her responses. The dance of inter-species communication would usually start with me realizing that Cozy had something she wanted after which I would start the interrogation. It would usually proceed something like this: 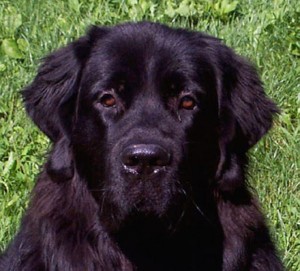 If this was not what she wanted, then she would continue to stare, perhaps tilting her head a bit as if to tell me, no — guess again.

She was always hungry, but if that wasn’t the foremost thing on her mind, she would then slightly tilt her head in the opposite direction while continuing to stare at me.

“Is Timmy stuck in the well?”

You know, I think you’re a bit of an idiot…

If I didn’t guess in the normal list of questions she might get annoyed at my stupidity and snort at me. Cozy was a champion snorter, her repertoire including disgust, impatience, derision, disbelief, and even impertinence though, honestly, I think I just frustrated her a lot. Cozy would snort while continuing her stare and again tilting her head in the opposite direction. This would usually be followed by my saying something like “I’m sorry Cozy Bear, but I don’t know what you want”. Snort.

One question that almost always came with an enthusiastic YES! was “Do you want a cookie?” Because that question resulted in a universally positive response I usually left it out because then I’d have to give her a cookie and we’d be right back where we started. Sometimes she actually wanted a cookie, so leaving out the question wasn’t always smart, which then led to more snorting. Eventually I figured out that she would only ask for a cookie if I happened to be standing in front of the cabinet containing the cookies. Though I like to think of myself as the smart one between us, In retrospect I have to wonder if all those conversations were a continued effort by Cozy to train me.

“Did you find the Kong?”

This time her head would tilt a full 90 degrees sideways. YES! Success! She would start to trot off, stop after a few steps, then turn to make sure I was following. I’d get up and she’d run off into the living room because that’s where the kong was usually lost. I would dutifully follow her and find her standing at the side of the couch looking down where the couch skirt met the floor. She would then look at me, then look under the couch again and bark with excitement. This meant I have managed to let my Kong roll under the couch where I am unable to retrieve it. Would you be so kind as to retrieve it for me with your wonderfully opposable thumbs?

My Cozy was very articulate.

Sure enough, once I got down on the floor and pulled up the couch skirt, the Kong would be under there, just out of her reach. I would grab it and roll it out onto the floor where Cozy would pounce on it with glee.

Having the Kong in her mouth she would flip it around a few times, bobbing her head up and down in the air with a sense of happiness that few of us experience after childhood. She would then either prance around the house with it or throw it at me in an effort to get me to play.

If, on the other hand, “Are you thirsty?” was the right question, she would get up and run over to the water bowl and look at it. If I wasn’t around to play 20 questions with her, she would just nudge the stainless steel bowl around the tile floor in the kitchen until she annoyed someone into helping her. I don’t know why she just didn’t do this every time she was thirsty, but I like to think that she enjoyed the game. For all I know she felt like it was good to make me think every now and then.

Any time Cozy needed or wanted something we would go through the routine, but only ever with me. If I didn’t figure it out and it wasn’t overly important, she would give up and go lie down with a snort letting me know how impossibly stupid I was. Thankfully there weren’t many things in Cozy’s life that were very complicated.

Though probably not quite as clever a form of communication, Cozy would also groan with pleasure when I rubbed her ears just right. While other people would certainly rub her ears for her, she seemed to prefer the way I did it. I would grab her ear flap, and sticking the pointy end inside her ear canal, sort of roll her ear around while gently pushing in. This was a heavenly experience for Cozy and she would groan with delight in a way that I am utterly incapable of describing. I swear it was almost an erotic experience for her. I loved the happy noise she made and called it “purring”.

I wasn’t really scratching, and I wasn’t just rubbing, so I dubbed these special treats ear scritches. No one else seemed able to rub her ears just the right way, so when she wanted it done she would come to me and jab her nose into my crotch after which she would lay her head sideways on my lap as if to say this ear please. She always got her ear scritches when requested with no snorts required.