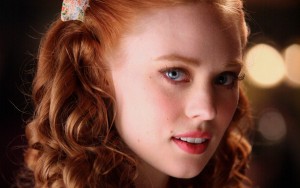 Dogs, we discovered, are a lot like children; if you have no idea what you’re doing, they become brats. With Cozy being so alpha coupled with the fact that she was incapable of being nice around unknown dogs (earning her the new nickname Cozy-Brat), not to mention the whole Daisy dragging Lauren incident, we decided that it was time to bring in professional help.

We found a local dog-training company and arranged to have someone come to the house to help us. Ginny was tall, thin, attractive, female, and had long curly red hair. I have a thing for women with red hair – especially long curly red hair. I found myself suddenly hoping that Cozy would require lots of extra work. Lauren was not amused.

The part of Ginny the Dog Trainer will be played by Deborah Ann Woll in this tale. You may remember her as the vampire Jessica Hamby from the HBO series True Blood, a show which occurred 15 years after the tale being told, and thus has nothing to do with the story. I must also point out that any similarities in this tale to redheads, vampires, actresses, succubi, dog trainers, or other creatures real, fictional, or imaginary is purely coincidental. And by purely I mean mostly. And by coincidental I mean have you seen Deborah Ann Woll? Damn…

We introduced Cozy and Daisy to Ginny, who seemed right at home with the big dogs. She watched us interact with them as well as with each other as we told her all about their quirks, behaviors, and problems.  She asked us to show her what Cozy was doing, so I obediently put the leash on Cozy and proceeded to walk her around the yard. Cozy pulled and jumped and generally disregarded anything I said as you might expect from a dog with a nickname like Cozy-Brat. There was a new person in the yard, and there was barking, lunging, and sniffing to be done! Ginny asked politely if she could try, and I handed her Cozy’s leash. To my complete dumbfounded astonishment, Cozy snapped right into line and walked as if she had been trained to do so since birth. 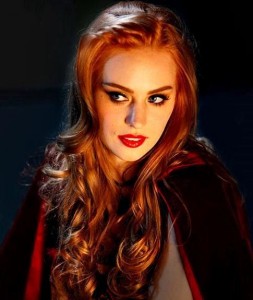 Clearly this woman had supernatural powers to be able to command respect from a recalcitrant she-beast such as the Cozy-Brat. Though still loving the red hair, I decided to keep my eye on Ginny for other signs of mystical powers since there was no way a mortal could control a dog like Cozy with such skill and aplomb. Besides, the last thing I needed was a beautiful redheaded enchantress complicating my life. Still, Cozy respected her so I cautiously decided that it was worth the risk. That fact that she looked like my favorite actress from a show that wouldn’t exist for another 15 years had nothing to do with my decision.

Ginny politely explained to us that problems with dogs were usually problems with their owners. She said that Cozy was good with her on the leash because Cozy knew that Ginny meant business. I was doubtful, but here I was faced with a beautiful crimson-haired woman that seemed to have the ability to command animals. What could I do but let her school us in the arcane arts of canine manipulation and control?

For the next few weeks Ginny would come to the house and show us how we (not the dogs) were supposed to behave. She taught us how to properly walk a dog, how to give commands to a dog, and how to be the alpha while walking a dog. She taught us what commands could be optional (let’s go Cozy) and what commands were not optional (Cozy — come!). She taught us how to socialize the dogs to other dogs, and how to react when other dogs would come by. She even brought her own extremely well trained dog to be a distraction for Cozy while we trained. Otherworldly abilities or not, Ginny’s tips made a real difference in Cozy’s behavior.

We would take both dogs to the park, make them sit and stay while we walked away, then yell Come! And watch them gallop towards us. We rarely let Cozy completely off of the leash because she just couldn’t be trusted, so Ginny made us a 25 foot lead out of thin nylon rope. If Cozy bolted, I could step on the lead and it would stop her. This worked pretty well, and she didn’t pull me over and drag me across the park screaming like a little girl even once.

We learned that due to Cozy and Daisy’s very different natures, we needed to command them differently. We could yell at Cozy all we wanted and she wouldn’t care, but if we yelled at Daisy she would crumble. We also learned that training a dog was seriously hard work, and that it was mostly a mental and behavioral endeavor. We never once had to hit them, and we never had to use any shock collars, prongs, tasers, or cattle prods. We did use choke collars, but they really only mattered with Cozy. Actually, the choke collar didn’t really matter to Cozy, either. Her neck was thicker than my waist at the time, and a whole lot more muscular, so the choker really had very little effect.

While doing all this training, Cozy would test us as much as we would test her. Cozy liked to lie outside and enjoy the many smells delivered with the evening breeze. When it was time for bed I’d open the door and call her in, after which she would usually just lie there and look at me as if to say screw you — I like it out here. One of the things Ginny taught us was that if you use the recall command (Come!), there was no option. If the dog didn’t come, then you went and got her and made her come to you. At 11:30 at night, when it was cold out and I didn’t have shoes on, I’d find myself pleading with her to please come in because if I yelled come! and she refused, I didn’t want to have to go get her. Perhaps we hadn’t learned as much as we thought we had.

Sometimes when I’d issue the recall command to Cozy she would sit and stare at me for a few seconds for dramatic effect. I’d look at her and the battle of wills would begin. Like two gunslingers we would stare at each other, each sizing the other up until one would draw. After a few seconds of staring, she would explode into action and come barreling at me with all the exuberance of a champion racehorse on cocaine. There is only one response when a 160 pound dog comes charging at you. From repeated experience I can tell you that the proper response is, Oh crap! 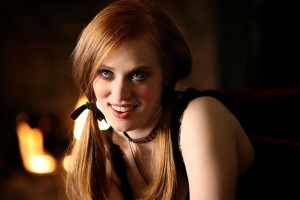 Usually Cozy would dart to one side at the last second. The problem was speed and timing. If I darted at the last second in the same direction that she did, a collision was the likely outcome. I had already lived through one major knee rehabilitation having torn my ACL during Tae Kwon Do some years before and I did not enjoy the idea of another. Since Cozy’s charge was at my knee-level, joint destruction was a real possibility so dodging the charge was serious business.

Cozy took me out only once that I can recall. The only detail I remember is Lauren laughing at me as I lay on the ground fuming while Cozy trotted around the yard in the triumphant splendor befitting a conquering hero. At least she had come when I called her, and for that little triumph I’d like to think that  Ginny would be proud.