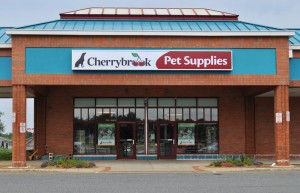 Out in northwestern New Jersey there is a wonderful pet store called Cherrybrook that lets you bring your pets into the store. This was a big deal in the late 90’s, as not many places had started to allow such things yet, so we decided to bring Cozy and Daisy to Cherrybrook, in part to show them off, and in part to help socialize them.

At this point in Cozy’s life she was probably 140-160 pounds, but still very much full of youthful energy. She was a puppy in a huge dog’s body that couldn’t understand why she could no longer fit under the dining room table. Being the intelligent people that we were, neither of us could imagine how anything could possibly go wrong during a simple trip to the store.

At the time, this Cherrybrook location was a warehouse-like store with long rows of products for purchase and sniffing depending on your species and/or inclination. We brought them into the store on their leashes and let the other customers and employees love on them while we looked on with pride. They were both a big hit, and since the store wasn’t very crowded, we walked around and practiced their basic obedience in a public setting. It was as wonderful an experience as we had envisioned.

On the way out I noticed a large shoulder-purse-sized bag on the floor in the open space between the ends of the aisles and the beginning of the cash register lanes. I figured that a store that lets pets wander about would likely have items on the floor so I didn’t give the misplaced bag a second thought.

Cozy walked up for a sniff because that’s what dogs do. She  seemed more interested in this item than the other things we had seen and smelled in the store, but I had learned at this point that Cozy could be interested in any number of odd things, many of which I’d honestly rather not know about. After a good sniff she nudged the bag with her nose, at which point a tiny paw with sharp extended claws came out swiping at the intrusion. The hiss of the cat attached to said paw was followed by the head of the cat that had, until recently, been sleeping in the bag.

Cozy had never seen a cat before. This rude creature had repaid her gentle nose-nudge with unexpected aggression, so Cozy did the only thing she could think of: she started backing up. She didn’t look behind her, she just retreated from the evil creature in the bag. My brave girl.

Newfs are not small dogs, yet they seem to have no concept whatsoever of their size. They think they’re lap dogs, and they think that you should pick them up and cuddle them. They also don’t seem to have any sense of where their butts are in relation to their heads. This is particularly fun to watch in newly full-grown Newfs who’s body’s development has far surpassed their mental and emotional capacities. Watching Cozy run on a normal day was like watching a newly licensed teenage boy drive in the snow while trying to ask a pretty girl to the prom. Adding the cat in the bag was like putting the putting girl’s Marine Corps father in the back seat of the car. Cozy was awkward, she was flummoxed, and now she was terrified.

As Cozy backed up, her rear end started heading for what retail stores call an end-cap. End-caps are the nice displays of merchandise on the end of each row where stores like to place impulse items or items that need to get special attention. End-caps are like the huge stacks of cans you see in comedies where someone knocks out the bottom can and thousands of cans fall all over the floor. Most stores don’t stack cans that way anymore because it’s just too funny when they get knocked over and that much humor is irresistible to bored teenagers.  The inevitable scene of cans spilling everywhere is what immediately came into my mind, so I started to pull on Cozy and tell her in my best alpha-voice, “No!”

Cozy didn’t stop though, for her world had been turned upside down. How could a bag contain a fierce creature that would want to hurt her? Her eyes wide, she retreated from the monster in the bag. Since I was a tall dorky biped and she was a low powerful quadruped, I had no leverage. She continued to back up, and I continued to get dragged across the smooth tile floor.

Her butt connected with the end-cap on an angle. There were no cans, thankfully, but rather a simple display with pegs that held hanging packages. Packages, I might add, that had no real weight and offered little resistance to her fearful retreat.

Cozy didn’t knock over a huge display of cans. That would have been too cliché, and my Cozy was anything but cliché. She just continued to back up, and as her butt hit the metal of the end-cap, she went from awkward terror to all-out panic. With a seemingly solid threat behind her and a ferocious sharp-clawed devil-cat to the front, she chose the lesser of two evils, and that was when I heard the screaming sound of metal. Cozy wasn’t knocking over the end-cap, she was moving the entire row!

With the sound of tortured metal ringing in my ears, I finally remembered what Ginny had taught me – pull Cozy off-axis so I didn’t have to fight her strength. I lowered myself down and pulled her to the side, and yelled, “Cozy!”  At that point she finally came out of her panicked retreat, completely unaware that she had just redesigned a significant portion of a sizable retail store. Stunned silence fell on the store as everyone within its confines stared in the direction of the recently shrieking metal. Cozy, her panic at an end, was still not going anywhere near the bag that surely contained the devil himself, so she bravely cowered behind me while I stood in shock, looking down at the scratched tile in awe. The cat, as expected, simply went back to sleep in its bag. 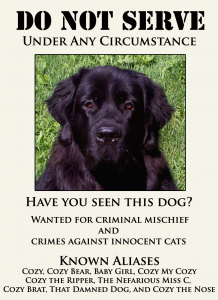 We offered to help move the shelves back but the cashiers just stared at us in stunned silence. We paid for our merchandise and left before someone with authority could change their minds. I think from that day on, the map in her mind showed a store called Cherrybrook, with a giant cat sitting on it, the label reading simply Here be Dragons.

We never did bring them back to that store, and I think Cozy was just fine with that. I have to wonder if there’s a picture of Cozy on the wall behind the counter with other dogs who have been banned from the store, but I’ll never know because to this day I’m too afraid to return for fear of seeing my own name on the wall.