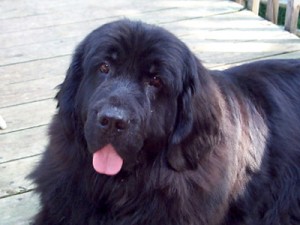 One day while walking the dogs at the park, we had stopped at the playground so people could fawn over our big black lovable dogs. Since there was a water fountain in the playground, we would often stop there for a drink and some Newfy socialization.

During one such visit, we were standing in the playground when someone walked by with two small dogs. They yapped at Cozy and Daisy the way that small dogs do, and I restrained Cozy the way I always (barely) did. Lauren knelt down next to Daisy and while petting her, told her to relax. That’s when the excitement began.

Cozy had remained in place and was sitting (though not nicely) by my side. As if in a dream, I looked down and saw, to my astonishment, Lauren sliding along the ground on her belly in front of me. I’m pretty quick in situations like these, and due to the odd situation in front of me my brain kicked into gear. Here’s roughly how I remember my thought process:

That’s odd, Lauren usually walks on two legs like most of the women I know.

Why would she choose to slide on her belly?

I wonder if it’s something I said. It usually is, like that time about the tacos.

Man, I could really go for a taco.

I wonder what’s for dinner.

I’m going to ask Lauren if we can have tacos for dinner.

Daisy had apparently decided that the restrictions and social formalities of being a duchess were too much for her. She had decided that the whole air of royalty was a farce and that it was time to be a good old-fashioned New Jersey bad girl. Furthermore, it was time to start eating little dogs, too. Without warning, Daisy had lunged for the little dogs and in the process, had pulled Lauren over and dragged her as if she wasn’t even there.

In slow motion Cozy and I watched as the ever polite and lady-like Miss Daisy dragged her favorite person right past us. Twenty feet into the spectacle, reality hit me and my taco-deprived brain returned into real time. Using my best drill instructor voice I yelled, “Daisy, STOP!”

The command STOP! was designed to halt them in their tracks. We had trained them that any time we yelled the command, they were to stop whatever they were doing and stop moving. This could be useful if a dog is about to dart into traffic for example, or when reaching to grab a turkey leg from the counter. We practiced it a lot with varying degrees of success since we seemed to have recurring instances of turkey-leg counter-surfing. Remarkably, this time it worked.

A cloud of dust settled over the scene as Daisy came to a sudden stop. The little dogs were gone, as were the owners. Blinking as if awaking from a trance, Daisy turned around and saw Lauren lying in the dirt with the leash wrapped around her wrist. Daisy walked over and licked Lauren’s face, seeming to wonder why her beloved Mommy would be lying there. Cozy and I ran over to check on Lauren who, though scraped a bit from being dragged through the wood-chips on the playground, seemed no worse for wear.

As the people came and surrounded us asking if she was alright, Lauren assured everyone that she was. Lauren got up, and as the crowd dispersed, she grabbed herself, looked at me and quietly mouthed “My boob”. She later explained that she had landed funny while being dragged by the crazed beast. It was hard to empathize with that kind of pain when I didn’t have a set of matching body parts, but I imagined that it hurt none-the less. I offered a complete visual and physical exam later, for which I was rewarded with a punch in the arm. Women! I rightly decided that this was not the time for asking about dinner, and my dreams of tacos were left unfulfilled.

We have no idea what had set Daisy off that day other than the obvious desire to eat little dogs. She had never done anything like that before, and seemed to have no recollection of the incident. Miss Daisy had never before lunged at anything or anyone that we knew of, and had always appeared to be a perfectly demure lady. We never figured out why she should suddenly decide that these two little dogs were worthy of dragging Lauren through the dirt. Daisy never again showed such aggression, and never again pulled so violently on the leash. Upon later interrogation, Daisy refused to talk about it, even when offered immunity in exchange for the truth. A girl is entitled to her secrets, I suppose.