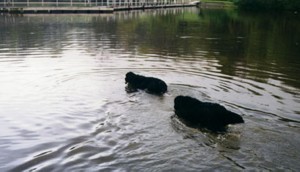 There are a variety of ways in which we might have learned that we had become crazy dog people. Spending more on grooming equipment for them then we ever had for ourselves was a clue. Buying at least one vacuum a year due to an apparent infant mortality problem in modern vacuum cleaners was another. For us, though, the act of taking our dogs to the lake in the rain was the defining moment. We hadn’t planned on going to the lake in the rain. We took the dogs to the lake on a cloudy day and when we got there it had started to drizzle which then turned to light rain. Even that didn’t make us crazy. What made us crazy Newfie dog people was the fact that we never even considered leaving.

A dreary rain-soaked day is the kind of day normal folks retire to their warm dry homes. We of course, desiring happy dogs, stayed in the rain and let them frolic in the lake, and since all the normal people had gone home we let the dogs off of their leashes to play unrestrained. Their joy in the water quickly spread to us and I fondly remember this as one of the best days I’ve ever spent in the rain. Admittedly my list of days spent in the rain is short, but this was a good one. 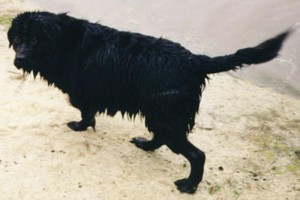 Naturally, I took pictures, many of which are not what I would consider to be examples of excellent photography. It would seem that my trusty film camera didn’t like the rain as much as our dogs did likely due to its lack of an protective oily outer guard coat of fur. Luckily, after a night in a dry house the camera came back to life and the film was unscathed. I would like to say that I had learned my lesson about cameras and the rain, but I don’t seem to learn such lessons easily. Later in life I would resign myself to buying weatherproof cameras that cost a lot of money, but such things were never even considered in the days before we had water dogs. 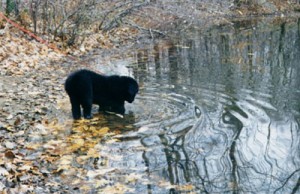 The dogs could not have cared less about the rain; they were wet, so life was good. Cozy had stepped in the water before, at this very lake in fact, but she had never actually swam. We didn’t want to have to hang our heads in shame if we met other Newfy people. You mean your Newf can’t swim? How delightfully ridiculous! That’s how we came to find ourselves at the lake in the rain: fear of ridicule from imaginary hecklers.

There was a beach of sorts at the lake, and we had to climb under the chains with the no swimming signs to get to it. Such rebels we were! The water was glassy calm with only random dots in the reflection from the raindrops. We picked up a stick and Cozy instantly knew that the game was afoot, for dogs have an instinctual connection with sticks of all types. They are greatly aware of sticks that are at imminent risk of being tossed, and Cozy was especially tuned to this frequency. We tossed a stick into the water close to shore and both dogs leapt into the water, Cozy in the lead with Daisy on her wing. Cozy pounced on the stick, grabbed it and trotted back to us with a look of pure joy. Look Daddy – I saved it! We praised her with all the enthusiasm that you might expect from two rain-soaked dog-loving idiots such as us.

Lauren took the stick from Cozy and tossed it a little bit farther into the water. Again Cozy led the charge and Daisy followed, ever the dutiful omega dog. We repeated this game, each time throwing the stick a little farther to coax them into the deeper water. Sometimes they’d run out into the water and the stick would elude them. When this would happen they would stand in the shoulder-deep water and look at us as if to say, sorry – we lost the stick. Do you have any others? I didn’t have much hope for them being rescue dogs if they gave up on victims so easily.

Cozy learned that leaping into the water made too many waves which then obscured her view of the stick. The next time Lauren threw the stick, Cozy gently walked into the lake so as to limit the waves. Clever girl! Daisy, realizing that as wing man she was being derelict in her duties, bounded into the lake full steam and drowned the stick with waves. I swear I could see Cozy rolling her eyes. They were having a wonderful time. 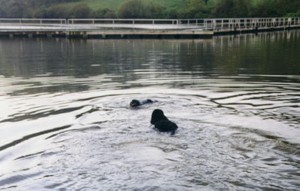 Finally, Lauren threw the stick out farther than she had previously dared. They both ran out in a frenzy of stick-rescuing enthusiasm, but the stick was just out of reach. Cozy, no doubt on her tip toes in on the bottom of the lake pounced on it, lost her foothold, and was gone. The water was too deep and she had gone under, and as we watched in suspense, an eerie calm descended on the lake. The rain briefly stopped, the birds were silent, and the world held its breath while Cozy remained submerged. For a desperate few seconds Lauren, Daisy, and I all watched the calm lake, the seconds ticking as we watched for our Cozy.

Finally, after what seemed to be about three and a half hours, Cozy popped up from the water, the stick in her mouth, her feet paddling in the water. She was swimming! Lauren and I jumped and exclaimed “good girl!“ like idiots and ran to Cozy who paddled her way back to shore. We showered her with praise, sharing the love with Daisy who had assisted most gallantly. We then continued to toss sticks for them until the rain returned in force and the camera quit. It was time to go home. 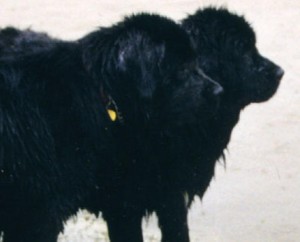 Cozy and Daisy, now seasoned stick-rescue dogs, scanned the lake for any sticks in need of rescue before we left, though none remained. In my heart I could see them scanning for people, saving swimmers as only a Newfoundland can.

Cozy had finally caught a glimpse of her heritage and she had become as legendary as the storied dogs of yore, at least to us. Where we had entered the park merely moist dog owners, we were now proud soaked parents of a heroic and noble pair of Newfoundland water (stick) rescue dogs. We clipped on their leads and walked them back to the car with echoes of flashbulbs from reporters eager for a glimpse of the courageous lifesaving dogs in our heads. For that one day, every stick in the park knew what it was to be safe. It was a glorious day, rain and all.