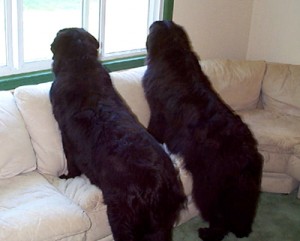 We lived on a nice two acre rectangle of land in rural New Jersey. The house had a large front yard that bordered the street along the front edge and the mailbox was in the middle of the yard along the road. I really wanted the mailbox to be by the driveway, but years ago I gave up trying to move it because four inches under the soil was some sort of material impervious to any of tool I could legally attain. Logically, I imagined this to be some sort of buried alien spacecraft, the discovery of which would cement my name in the annals of human history forever. Digging is hard, though, so I just tried not to think about it. The unfortunate mailbox position forced us to get off our lazy butts and walk to the mailbox every day, or at least on the days we felt like it.

On one such day of increased motivation, Lauren went out the front door and walked up the slight incline of our yard to get the mail. Apparently this was also a day that the dogs really loved the Mommy, so being left alone with Daddy was simply intolerable. Thus, as soon as Lauren walked out the door Cozy started barking and running back and forth throughout the house with enthusiasm. I came out of my cave to see what all the ruckus was about only to find that Cozy had Daisy in an uproar and they were now both running and barking together as a pack seemingly at nothing in particular and with me in the way.

Being the clever big-brained biped that I am, I quickly deduced that they were in a tizzy because Lauren was getting the mail. I called to Cozy and brought her over to the window facing the road where, guiding her head, I directed her attention to the mailbox. She was tall enough to see out the window while standing by the couch, and upon seeing the long lost Mommy she paused for a second then woofed a happy there’s the Mommy! bark. Daisy, experienced gal that she was, climbed up on the couch with her front legs to get a better view. Cozy, ever the alpha bitch, saw Daisy and jumped up on the couch shoving Daisy to the side in order to watch Lauren at the mailbox. Given the Mommy/mailbox emergency at hand, the normal rules regarding dogs on the furniture had apparently been suspended, though a post-event inquiry failed to produce any of the paperwork necessary for such a suspension of protocol.

After Lauren got the mail, she closed the box and started to walk back down to the house, flipping through the bills and junk mail hoping for something interesting. The dogs again started barking like children on a sugar rush while bouncing on our $2000 white sectional: Mommy! Mommy! Look at me! Mommy! I’m on the couch! Mommy! Mommy! MOMMY! My house had become a nicely furnished Newfy lunatic asylum all because the mail had come.

As Lauren got close to the door the dogs figured out that she was actually coming back inside, at which point they both jumped off of the couch in unison. Landing on the floor with a house-shaking thud, they both charged right through me in a crazed stampede to greet the Mommy, who apparently had been gone for 38 years in perceived Newfy-time.

Naturally, this episode of mail retrieval theater would be repeated every time anyone got the mail, but the real problem was that I had taught Cozy that she could observe the outside world by looking out the front window.  The afternoon of that first observed mail gathering was comprised of Cozy spending her time at the window watching the newly discovered world go by. We endured fevered reports about cars, bicycles, joggers, and God help us, bunnies and birds by the dozen. This wasn’t all bad as Cozy’s newfound awareness would serve as a great alarm if someone pulled into the driveway. I also imagine it would have served as a great early warning system if aliens happened to land in view of the window, but before we could test that theory we discovered that there was a far more sinister threat lurking outside.

Night in our section of the woods can be pretty dark when the moon is new or the clouds blanket the world with darkness, and Cozy’s nemesis first appeared on just such a night when the darkness was complete. Between the darkness and the many strange animal noises, our house could be pretty creepy at night for those with an active imagination. It could be especially worrisome for people who like to write and have a penchant for hyperbole. Luckily, we had Cozy standing guard at the window.

One night while we sat watching TV, Cozy sat at the window and suddenly started barking the Get the gun! The zombies are here! bark. If you’ve never experienced the coming of zombies, the bark that it elicits can be pretty startling. Thinking that we weren’t due for a zombie invasion for at least another month, I went to see what Cozy was barking about without first getting the shotgun.

She barked and snarled at the darkness. She was frantic! Her eyes, taught muscles, and perked ears made it plain: There’s something out there! I knelt down next to her to see what she might see, momentarily deafened in my right ear as she sounded the alarm. She was shaking with excitement as I patted her head, mentally considering how long it would take me to load the zombie gun, and asked her, “What is it, Baby Girl?“

Then I saw it.

Down on Cozy’s level I could see what she saw. Looking back at us from the darkness I could see the snarling teeth of the beast. Saliva spraying from its jaws, the visage was terrifying and it was coming right at us! No wait… it seemed to be holding its ground. Looking in the window at us was as ferocious a beast as I had ever seen or dared imagine. It was huge, and it was barking at least as ferociously as Cozy. In fact, it seemed to be a huge black dog that bore a striking resemblance to another dog I’d seen somewhere before. In fact, the dog in the window seemed to matching Cozy snarl for snarl as its deafening vocal attacks remained synchronized with the beast on my side of the glass.

Once again using my big brain, I reasoned that since the Living room window was roughly 12 feet off of the ground, either this was a rare stilt-legged zombie shadow-beast intent on killing us all or it was my idiot dog’s reflection in the window. Standing down from DEFCON-3, I reasoned that the latter was the more likely choice, at least this time.

How could I teach my paranoid dog that she was seeing her own reflection in the window? For weeks we endured Cozy sounding the alarm on dark moonless nights when the window would act like an obsidian mirror. No amount of calming or soothing words would deter her, for she knew that if she let down her guard for even one night, the freakishly tall beast would get in and likely kill us all.

I’m proud to report that I was the one who finally banished the towering fanged beast in the window, though Cozy no doubt knew in her heart that it was her. It was simple, really. You see, as a creature of darkness, the stilt-legged shadow-beast feared the light. By leaving the floodlights on outside our house at night, the beast kept its distance and finally lost interest in our house altogether. Though the obsidian mirror effect was minimized by the external lighting, Cozy no doubt felt great satisfaction in the knowledge that she had scared the monster away, and that she alone continued to keep the vile beast at bay.

Though the phantom of darkness had been banished, she kept her relentless vigil, always on the lookout for the freakishly tall undead beast that stalked the night just out of reach of the outside lights.

That’s what Cozy did because eternal vigilance is the price of freedom from the monster in the mirror.