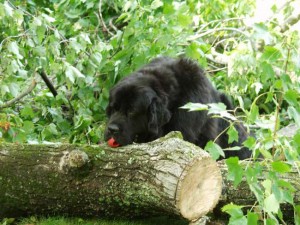 As my Cozy grew and grew, she seemed to get more and more nicknames. One of my favorites was Nosy Cozy, which is what we’d call her any time she’d stick her nose where it didn’t belong, which was pretty much all the time. We often called her Cozy Bear or simply Bear, since she looked like a black bear. Daisy was often called Daisy Bear for the same reason.

We called Cozy Baby Girl a lot, too. For Lauren and me, without children, Cozy was our first attempt at nurturing and growing a living thing with more personality than an iguana. She was our baby girl in every way, and she was doted on accordingly.

For reasons that since elude me, I also called her Cozy Cozy. Maybe I just liked the way it sounded or the way she perked up when she heard her name. Another favorite of mine was Cozy My Cozy in reference to Walt Whitman’s poem O Captain! My Captain!, also made current (for the time) by Robin Williams in the movie Dead Poet’s Society.

For the most part, I usually referred to Cozy simply as My Cozy. Somehow I was starting to understand that Cozy was mine and, perhaps more importantly, that I was somehow hers. Daisy wasn’t really my Daisy, but Cozy was definitely My Cozy. Cozy was special. I couldn’t articulate how or why, but the name My Cozy seemed to sum it up nicely so I used it all the time. Lauren also seemed to fall into the ownership naming style by using My Daisy pretty often.

Cozy was my velcro dog. If I was upstairs, she’d be in the same room with me. If I got up to go to the bathroom, Cozy would get up and try to come in too. When I’d lock her out, she would lie down right outside the door and wait for me, and if I’d spend too much time in there I would hear her sniffing under the door to make sure I was still in there.

Velcro dogs are wonderful companions, though they can have their downsides. For example, if you’re in the kitchen standing at the counter doing something and your 140 pound velcro dog comes up behind you and lies down, there’s a pretty high probability that when you turn around to walk away you’ll trip over your loving companion and fall flat on your face. I’m convinced that this is a conspiracy conceived with the intent of getting us down to their level so they can cover us with slobbery wet kisses.

A helper is, “a person or thing that helps or gives assistance, support, etc.”, and that was Cozy in spades. Unfortunately for us, Cozy’s help was so thorough and ubiquitous as to result in the opposite of help in every sense.
To Cozy, “helping” meant “being in the middle of everything”, which was great if what you needed was a large black furry dog on your lap, but not so great if what you needed was space, sanity, or the ability to take a step in any direction without falling on your face. She was eager and willing, which is more than I can say for most of the “helpers” I’ve had in my life, but the truth of the matter is that she just wasn’t very useful unless your main requirement for a helper happened to be the “support” part of the definition, in which case she was the champion helper of all time. 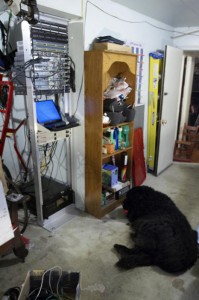 It didn’t matter where I was in the house or what I was working on, either. I had a telecom rack full of networking gear in the garage that I often stood in front of while doing various tasks associated with my work, and Cozy was always right there with me, no doubt enjoying the cool cement slab while secretly hoping I would trip over her so we could spend some quality floor-time together.

When Lauren came home from work every day she would run into the small bathroom downstairs because it was the closest bathroom after a long commute. This little bathroom barely had room for one person, but the dogs were so excited by the mommy coming home that they needed to be in there with her. By the way, the mommy is what they called her. You know, in my head.

Cozy and Daisy, both being almost entirely black, also had the ability to completely disappear in a dark room. Since I tend to be a bit of a night owl, I would often go to bed in the early morning after spending hours engrossed in some project. I can’t count the number of times that I’ve tripped over one of the dogs who were curled up in the hallway, in the bedroom, or somewhere else that I didn’t expect them to be on my way to bed. On these occasions, I would conjure up more colorful names for them, most of which are best forgotton.

Other good-natured names for Cozy included Beast, Digger, Girl, Girly Girl, Slobber-Pus, Drool Machine, Beast, and if she chewed or otherwise ruined something of mine, That Goddamn Dog. As anyone with children will tell you, loving someone is not proof against profane nicknames slung about in the heat of battle, or for that matter, puberty. Cozy was no exception, and being the troublemaker that she was, caused all manner of new nicknames to be spawned.

Mostly though, she was just My Cozy.