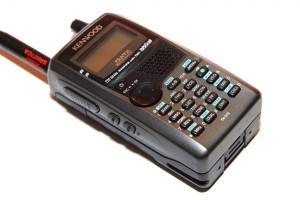 Warning: I’m about to show you how to take apart your expensive electronic device. You may void your warranty. You may ruin your radio. You may slip and jam a screwdriver into your hand. If you are not comfortable poking around the inside of expensive electronics, do yourself a favor and stop. If you break your radio, hurt your hand, cause an inter-dimentional rift, have a psychotic episode, or bleed profusely from both eyeballs for more than four hours, please consult your doctor and tell him that I warned you of the risks.

Let’s start tearing into the radio, shall we? 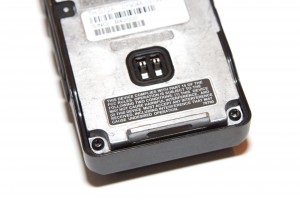 First, you need to pull the knobs off. They both pull straight up. After that, remove the battery. Be advised that if those two steps are too complicated without associated pictures, then this probably isn’t the job for you. If, on the other hand, you’ve ever fixed anything more complicated than, say a stuck zipper, the remaining steps should be fine. If you’re a ham like me who likes to build their own amplifiers and likes to restore old electronics, then this will be a cakewalk, whatever that means.

With the battery off, you’ll see two screws on the bottom of the radio. Remove these and set them aside.

I’ve always found the “set them aside” part of instructions amusing. I mean, what else would you do with them? Throw them out? Eat them? Mail them to Grandma? Geez. Don’t lose the screws, OK? 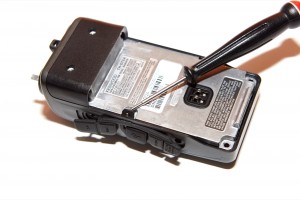 The two screws are what hold the case on. After removing them, you then
need to pry the rubber port cover off. It’s only held on by the small tab you see from the back of the radio with the battery off. Pry it up from the ports and then pry that little tab up with a small flat-head screwdriver. The rubber cover should now slide out to the side, but be careful as this piece can tear if you pull it with too much force. 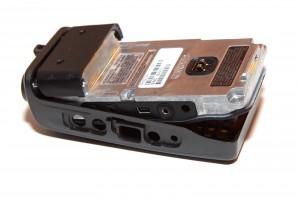 With the rubber cover off, you can now pull the case off of the radio. Pull it up and out of the case from the bottom end of the radio. You’ll probably feel some pieces come loose. These are the 4-way arrow rocker-button cover and possibly the rubber keypad. Catch them and put them aside if they fall out. You know, instead of mailing them to Grandma. With the main cover tipped up (or down depending on how you’re holding the radio), you’ll need to pull the case up to slide it off of the top over the knob shaft. Looking at my picture, you’d slide the radio to the right and “out” of the case. 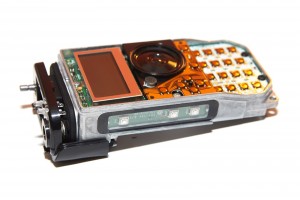 Take this part and throw it into the fireplace or maybe the trash. Or keep it nearby for later reassembly. Whatever — it’s your radio. I’d probably keep it, but who am I to judge? 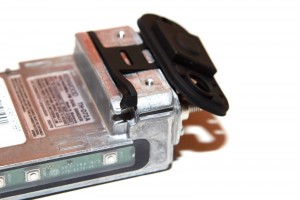 You should now see a rubber cover on the top of the radio which covers the encoder, the GPS antenna, and the SMC antenna connector. Pull that off the same way as the last piece, but note that it’s hinged on the back. Just pull it up and over the knob shaft and it should “peel” back from the radio. You don’t need to remove this part, but if you want to, gently pull the lips of the piece away from the radio as shown in the pic. There is one such lip on each side, and pulling them both out will allow you to remove this piece which you should now donate to charity. 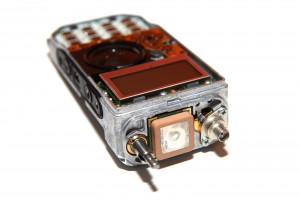 You should now have access to the encoder so you can tighten it. To tighten, look at the brass ring surrounding the encoder knob. This ring is what you’ll turn to tighten it. To do so properly requires a special tool called a spanner wrench, but if you’re someone like me who doesn’t have one of these, then you can use one or two small flat-head screwdrivers. 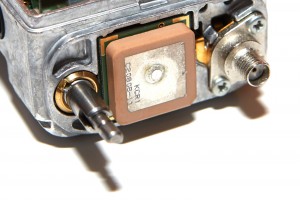 The brass ring is softer than your screwdrivers, so you may nick it if you’re not using a spanner wrench. Just be careful as this is a very inexact way to do this and it’s very easy to have the screwdriver(s) slip and cause damage to either the radio or your hand.
You have been warned! 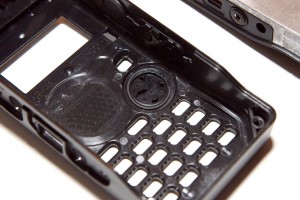 Everything goes back together in the reverse order. Note that the 4-way rocker is keyed and only fits on one way. Actually, that’s only partially true.

The 4-way rocker cover will fit in the cover multiple ways, but the 4-way rocker itself has a key in it (a long slot in the white “plus-sign”-looking button) which will only match with the cover in one way. The pic shows how the cover should be oriented when putting the radio back together. 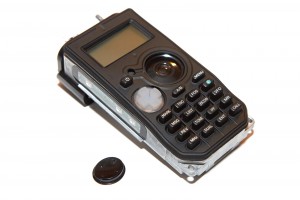 Of course, being able to reassemble the radio assumes that you kept all the miscellaneous bits and didn’t spill the little black screws into your ’70s-style deep shag carpet where they’d be lost forever.

The steps required to reassemble the radio are, in order without pictures: 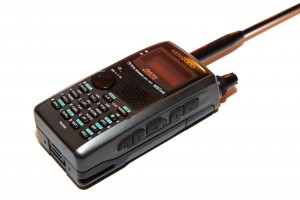 That’s it! You probably just saved $100 or more by doing this simple repair yourself. Or you cost yourself hundreds of dollars by ruining your radio. Either way, I’m guessing you learned something.