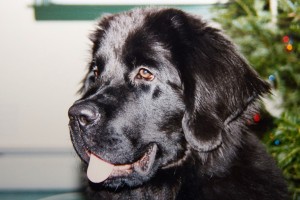 Cozy adored me, and though she also loved Lauren, with Lauren it was different. Cozy’s love for me was multiplied by an additional layer of respect. With Lauren, well, let’s just say that they didn’t see eye to eye on the whole female hierarchy thing.

Through our research we had learned that dogs live in a strict hierarchical society in which there was, in every pack, an alpha male and an alpha female. The alpha male and female are like the king and queen of the pack, and with rank comes certain privileges. Alphas expect to be obeyed, and they don’t take insubordination from inferiors. We learned that if a dog thinks that it has alpha status over its owner, then the owner may have problems ranging from the dog not obeying commands to aggression issues to the owner being downright afraid of his or her own dog. We weren’t afraid of Cozy, but we were starting to have some issues.

Thinking back, we remembered that Cozy was the little puppy that pushed all the other puppies off of Katie’s nipples so that she could get her fill. Cozy was the puppy that Linda had called a hellion before warning us that the adorable little pup could be headstrong. For me this wasn’t a problem. I was used to teaching Tae Kwon Do to a room full of eight-year-old boys, so when it came to commanding voices and alpha-type leadership skills, I had years of martial arts discipline on my side.

Being new to the puppy game, we hadn’t noticed at first that Cozy listened to me but apparently chose to ignore Lauren. When we realized what was happening we asked Linda about it, after which she said that it was likely that Cozy did not respect Lauren as the alpha female. Since I would command Cozy with a deep male voice, and since I was the only male in the house, she naturally accepted me as the alpha male. In Cozy’s mind, Lauren hadn’t earned her place at the top of the pack.

I’ll admit that there was a certain amount of pleasure in knowing that at last someone in the house finally recognized that I was the alpha male. Still, we had a problem. Cozy would have to learn that Lauren was the alpha female, but how? As Cozy grew larger and larger it was becoming apparent that she would soon outweigh Lauren, who weighed maybe 105 pounds soaking wet. Though amusing, the dangerous aspect of all this would come when Cozy went into heat. Once hormones started flowing, Cozy might challenge Lauren for the position of alpha female, and with Cozy likely to be a 150 pound descendant of wolves resplendent with an arsenal of teeth, claws, and attitude, we didn’t think the battle would end well.

Cozy needed to learn her place, and she needed to learn it quickly. The problem was, Cozy just didn’t seem to care when Lauren commanded her. If Cozy gave me a hard time I could (in theory) out muscle her, but Lauren just didn’t have the weight or leverage to win a physical confrontation, and let’s be honest here; there should never even be a physical confrontation! Lauren also just wasn’t an outwardly commanding or physically intimidating person. Cozy needed those traits in an alpha, or she would assume the title herself. Without the physical or behaviors aspects needed, how could Lauren possibly become the alpha of Cozy’s eye?

I don’t remember who gave us the advice, but I’m pretty sure that it was someone on the Newf-L email list. We had tried many things, but out of all of them, only this one trick worked. You see, Lauren had to spit in Cozy’s food.

In dog society, the alphas eat first. When they’ve had their fill, the rest of the pack may eat. If other dogs eat before the alpha allows it, the alpha will correct the other dog with snarls and snaps, reinforcing the alpha’s place in the pack. Lauren wasn’t much of a snarler, but the psychology could work just the same. If Lauren spit in Cozy’s food, then Cozy would know that Lauren had eaten first, therefore establishing in Cozy’s mind that Lauren was the alpha. It was brilliant, and it worked.

Now that in itself was amusing, but watching the exchange was comedy gold. Lauren would make Cozy sit while she filled her bowl. Lauren then would then take the bowl full of Cozy’s food, put it up to her own face and pretend to eat it – loud smacking gluttonous noises and all. In between grunts of satisfaction she would literally spit in Cozy’s bowl. It was a display of non-traditional etiquette the likes of which I’d never seen. Here my college-educated intelligent and beautiful wife was spitting in our dog’s bowl while the dog looked on with rapt attention. I was mesmerized.

If Cozy got a treat, Lauren would give it to her, but first she’d put it in her own mouth and pretend to enjoy it before giving it to Cozy. While this was mildly revolting with a snack such as a Milk Bone or pig ear, watching Lauren perform this act with stick-shaped treats like Pupperonis was both amusing and just a little bit titillating. While Cozy got an education, I got a free show!

The change in Cozy’s behavior was dramatic. Within a couple of weeks of this being acted out every day Cozy was a different dog with Lauren, all without either of us ever laying a hand on her. Lauren was quite proud of her accomplishment, and rightly so. She had earned the title of Alpha Bitch, a title she proudly holds to this day.