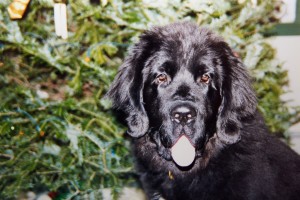 The year 1997 introduced us to our first Christmas with Cozy, who was now 80 pounds of crazed puppy energy. She was at the age where the spot on the floor made by a flashlight would occupy her for hours so long as you kept moving it. She was also tall enough that she could put her nose on the kitchen counter, which as you might have guessed, was a problem. This led us to instigate one of the first of many new rules for dogs in our house: no noses on the counter. This was a rule only in the academic sense, and was one in which Cozy had no interest in obeying. This rule would also come to be interpreted as no noses on the table, which was much harder to enforce since Cozy could actually rest her entire head on the dining room table.

Having a crazy five month old dog in the house that happened to weight 80 pounds was like having a psychotic pre-teen child with the mindset of a Brahman bull. She was starting to get some attitude, but she was generally a happy child who enjoyed life. Her size was becoming an issue, though, and in ways we had not anticipated.

Her tail was always wagging which was wonderful, but also potentially destructive. Like many people we had a sofa and love-seat in our living room with a coffee table in the center. It was routine for Cozy to come up to anyone sitting on the couch and bury her head in their lap while her happy tail would simply wipe everything off of the coffee table.  Remote controls, magazines, vases, books — it didn’t matter how big or heavy the item was. When Cozy wagged, the table was cleared.

Being the stupid new dog owners that we were, we would at first put everything back on the table and try to move Cozy’s big butt away from the table. As any Newfy owner will tell you, if you move a Newf like that, especially a dopey 80 pound five month old, it means only one thing to the pup: playtime! A wagging Newfy is about a .01 on the Richter scale. A romping let’s play Newf? That’s about a four. The earthquake that leveled San Francisco in 1906? That was about an eight. We had a feeling that left unchecked, Cozy could leave a path of destruction similar in magnitude to a major tectonic plate change of previously unseen magnitude.

This table clearing ability led us to dog-rule number two in our house: Happy tails never get punished. We would discover that her tail was capable of clearing not only coffee tables, but kitchen counters, window sills, dining room tables, patio tables, desks, vanities, and pretty much any other flat surface up to about three feet from the ground. If she broke something with her tail, it wasn’t because she was being bad – it was because she was happy, and it didn’t seem fair to us that she should be punished for wagging. Besides, it was our fault if we left something within tail range. We were supposed to be the ones with the big brains, after all.

I would also like to note that we had a rule that there were to be no dogs on the furniture. This rule was mostly followed, though of all the rules, this one only seemed to be enforced when I was home.

Cozy was still very much a puppy, and puppies have always been notorious nibblers. Being nibbled by an 80 pound monster would be a terrifying experience for toddlers and adults alike, so we decided that another rule was needed: No fingers in Cozy’s mouth.

Keeping fingers out of Cozy’s mouth seemed like a sensible idea on the surface, but how could we possibly prevent other people’s children from sticking their hands in Cozy’s mouth? We couldn’t, but we could perhaps teach Cozy that fingers shouldn’t be in her mouth.

Someone convinced me that any time Cozy tried to nibble on my hands, I should stick my finger down her throat. I have no idea who it was, and I’m sure there are many who would chastise me for abusing my dog.  Looking back, I wouldn’t recommend this to anyone because if Cozy had decided that I was hurting her,  she could easily have bitten my hand clean off. Still, my naiveté was strong, and I set about teaching Cozy not to allow fingers in her mouth. As awful as this sounds, it worked, and after a couple of weeks Cozy stopped teething on fingers entirely.

Since this was Cozy’s first Christmas, rules were a little lax and Cozy’s cuteness was all we could talk about. Our Christmas tree that year only had ornaments on the top half since little miss Cozy would nudge/nibble/destroy anything hung lower than what we called the Cozy line. I had an antique Lionel train set that had been a gift from my step father. I used to set it up around the tree and let it chug on its round track in the days before Cozy. Giving Cozy an expensive heirloom of a moving target to chase seemed unwise, so that year for the first time the antique train sat unused in the box. 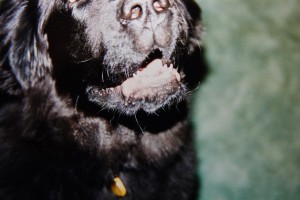 Cozy was at the age where her baby teeth were falling out as they were displaced by her adult teeth. Lauren would dutifully pick them up as she’d find them and unbeknownst to me kept them in a little box in her dresser. We’re not sure if the tooth fairy was going to come, but we were collecting a nice stash of teeth if she ever did. Sure, there was something mildly disturbing about having a collection of teeth in a jar, but as anyone with a puppy or young child will tell you, there’s little time available for rational thought. 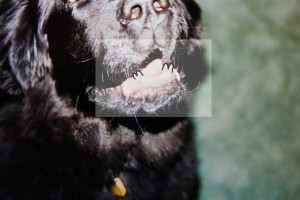 As usual, I was taking a lot of pictures, and while getting down in Cozy’s face for a nice close-up shot I noticed that she appeared to have four bottom canine teeth. I put the camera down and took a closer look and sure enough she had four fangs on the bottom. I pulled up her top lips but there were only the normal two (big!) fangs on the top. Closer inspection was difficult because some idiot had apparently convinced Cozy that fingers didn’t belong in her mouth. I grabbed the camera and took a picture because I knew that no one would believe me. Within a few days the baby fangs had fallen out and were lost forever. At least I had photographic evidence since none of my friends believed me. 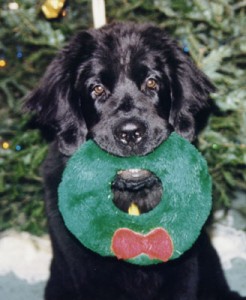 Having a puppy in the house while presents are being unwrapped is something that everyone should experience at least once in their lives. Cozy was showered with gifts, though the wrapping paper was as least as interesting as the gifts that it concealed. One of Cozy’s gifts that year was a small Christmas wreath dog toy with a squeaker in the bow. I had her sit in front of the tree and pose, holding the wreath in her mouth. I even managed to get a good picture before she bolted through the pile of wrapping paper wiping all the gifts off of the coffee table with her tail.
More about: [ Guild Guitars ][ Dogs ][ Cozy Tales ][ Ferret-Dog ]