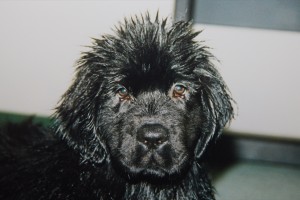 A Newf puppy, like any giant breed dog, grows like a weed for the first eight months or so. At 14 weeks of age, Cozy weighed in at forty pounds which meant she had grown those 40 pounds in just over three months. Given the opportunity she would eat anything that looked like food and, being a puppy, many things that did not. She would routinely grab things that she shouldn’t have and trot away with her head and tail held high as if to say look at me! I bet you can’t catch me! As soon as you’d take a step towards her she’d bolt just out of reach, then turn to face you with her whole body wagging and her treasure hanging from her mouth. She was fond of any type of laundry, but it was the underwear that really enticed her. She would often be found trotting through the house with bras, socks and anything else that would mortify the average young person. The constant public display of our inappropriate unmentionables was an inconvenience at most. Water, we quickly learned, was a much bigger problem.

Newfoundlands are water dogs. That doesn’t mean they like the water; it means they are genetically programmed to be in the water whenever possible. For Cozy, the water didn’t have to be clean, and it barely had to be water. In fact, anything with water in it would do just fine. For example, since Cozy was a big dog she got a big water bowl. She would joyfully stick her whole face in the bowl, take a big drink, then come over to us for a hug with water pouring from her jowls. She would put her feet in her bowl to cool off, or if she was feeling particularly mischievous, she would just tip the water bowl on its side in order to have a puddle to play in.

Cozy quickly discovered that mud was mostly water, and was therefore worthy of her continued attention. We only let her outside while we had her on a leash since the fence had not yet been installed. We tried to keep her out of the mud, but like a four year old boy in the rain, she would happily splash her feet into every puddle we encountered.

Within weeks the beautiful light green carpet in our house had become less light, less green, and significantly less beautiful. The walls started to look a little odd as well, particularly near the stairs. During my investigations into the cause of the new wall markings, I noticed that Cozy would rub her side against the wall as she walked. She was like a walking reverse mop, eager to distribute the day’s mud throughout the house as much as possible. As she grew, so did the height of the unclean section of wall. As a result, we had no reason to chart Cozy’s growth. Instead, all we had to do was look at the height of the smear marks on the wall in the hallway. We groomed her daily, and cleaned the walls regularly, but she seemed to be a magic mud magnet.

We decided that we needed to give Cozy a bath. We had read that we shouldn’t bathe her too often because it would remove the helpful oils in her coat but this dog was a mess and she needed to be bathed. With the best of intentions we filled the tub with a few inches of water and coaxed her into the bathroom. Actually, there wasn’t any coaxing involved since the tub was a giant puddle, but we did have to pick her up and put her in the tub. 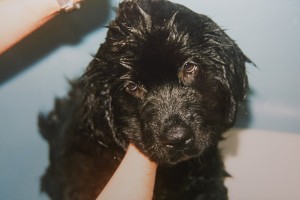 Newfies are about 50% hair by volume when you look at them. They actually have two coats of fur, an outer guard coat that you see, and a soft down-like undercoat that keeps them warm. The outer coat is oily and repels water, which can be handy when they’re walking in the rain, but problematic when trying to give them a bath. As a result, soaking a Newf is difficult without immersing them because that outer coat is virtually waterproof. When you do finally get them soaked, the formally majestic-looking Newf suddenly looks pathetic and sad until they dry off at which point they fluff back up to normal size. Though Cozy weighed 40 pounds, she looked like she had lost 20 of it when we finally got her soaked. Add the indignity of being lathered up and having a soapy mohawk courtesy of Mommy, and My Cozy was a sad sight indeed. She calmly put up with the indignity of picture-taking, and was a very good girl while we dried her off.

Then all Hell broke loose. 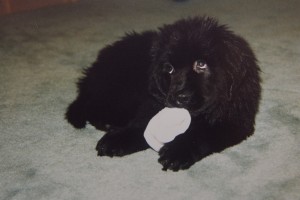 The moment we were done drying Cozy she bolted from the bathroom. She ran into each room of the house as fast as she could, literally bouncing off of the walls, beds, couches, and even us. It was as if she had stored up all her energy for the past three weeks and decided to unleash it in a fury of explosive, moist mischief. She ran into the bedroom and grabbed a clean balled up pair of socks then tore into the living room where she sat down to chew on them. Just as I thought she was done with all the excitement, I walked up to grab the socks and she bolted again, leaving them behind. No doubt she had just baited me somehow, but I was busy trying to catch a manic 40 pound freshly bathed puppy, so I didn’t put a lot of thought into the details. 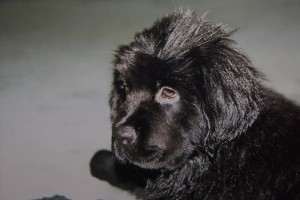 Cozy was like a berserk gazelle stuck in our house. No matter what we did she would run around us, bounce off of something and streak into the next room. How could any living thing have this much energy? As if this wasn’t bad enough, our attempts to dry her had been largely ineffectual and she was still soaking wet. Thanks to some sort of sick Newfie physics joke, when that water-repellent fur is finally soaked it stays wet for a very long time. We had removed as much of the water as we could with towels, but she was still wet and her shiny coat now sported spikes in every direction. She looked like a punk rock star from the 80s as she tore the house up with reckless abandon, all the while leaving wet streak marks along the walls. 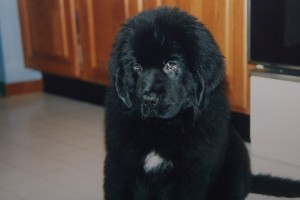 Lauren finally had the best idea I think I’ve ever seen in the face of such pandemonium. She stopped chasing Cozy, went into the kitchen and opened the puppy snacks. Cozy stopped mid-sprint and ran into the kitchen, sat down and waited for a snack as if she had been a good girl all day long. Magic. I made a mental note to thank Lauren’s parents for all that money they spent on her Psychology degree while we toweled off the final bits of water.

The chaos had ended in what felt like an uneasy truce between order and entropy. Every non-carpeted floor in the house was wet with puppy prints. As I surveyed the carnage, I noticed that even the walls had foot prints on them.

As Cozy sat and enjoyed her snack, we reflected on our wish to have life in our empty house. Though our wish had been granted, we seemed to have let the genie out of the bottle. A genie, I would come to learn, with a rather odd sense of humor.