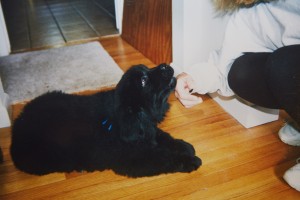 After eight long weeks, we received a call from Linda saying that we could come pick up our Cozy. We found her just inside the front door of Linda’s house, all puffed up from being freshly washed and blown dry. There is nothing quite like a Newf puppy, especially as we would soon discover, a fluffy clean one. She looked like a stuffed animal magically brought to life that easily seemed twice as big as she had been the week before. She still had her silver-grey eyes and her mischievous little face just seem to scream Play with me!, while also showing just a hint of nervousness. She still had blue around her neck and was living proof that the word adorable is an inadequate representation of the truth where puppies are concerned. 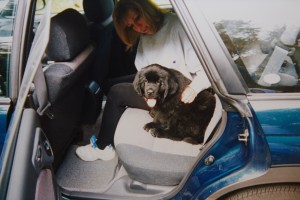 I drove us home that day, Lauren in the back seat of our Subaru Outback with Cozy curled up next to her. Cozy tried her best to break our hearts as she whimpered the whole way home. Consoling her the best we could, neither of us could imagine the shock of being taken from her family after only eight weeks of life. Everything she knew was gone; her mother, her litter mates, her patio — her entire world. The poor little thing was overwhelmed and scared as she rode in the car for the hour-long ride home. She trembled as Lauren sat with her, petting her and telling her it would be OK. 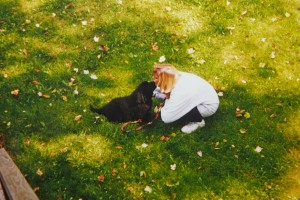 As soon as we arrived home her trembling subsided and the adventure began. We brought Cozy into our home and let her sniff everything at her own pace, then brought her into the back yard on a leash because the fence had not yet been installed. Cozy seemed tiny in our big empty yard as she dutifully sniffed the pile of toys we had bought for her. We let her explore her new home at her leisure since we didn’t want to push her, especially after her big first day home. She found a nice place to hide behind a sofa in the family room where she fell fast asleep. 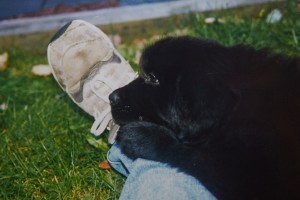 Having read up on Newfoundland dogs, and trying to be good parents, we had bought Cozy a nice crate and lined it with a bed and some toys. A crate is supposed to be sanctuary for a puppy; a place to hide, a den, and a place to call home. Puppies won’t usually poop where they sleep, so the crate helps reinforce potty training too. We had read all the books, and had done all the research. We were experts!

That night we put the crate in the family room, and put Cozy in her new den for the first time. We gave her goodnight kisses that she eagerly returned through the wire walls, after which we went to bed looking forward to the next day with our new pup.

Within minutes after going to bed we heard the most awful sound that either of us had ever experienced. A horrible pathetic lonely cry best described as a heartbreaking wail came from downstairs. We figured we’d try and bear it for a little while until she fell asleep. That seemed like the right thing to do since that’s what all the books had said. Just be patient.

She didn’t fall asleep. Not in ten minutes, not in an hour, and not in the sixty two hours it felt like we tried to hold out. She was downstairs, and we were upstairs on the opposite end of the house and the wretched cries pierced our very souls. How could you leave me? Hello? Help me! I’m only a little puppy! I’m all alone, and I’m frightened, and I’m pretty sure there are wolves behind the couch! Wolves! Did you see that? DAAADDYYYYY!

Lauren and I looked at each other and asked repeatedly “What should we do?” Neither of us had any experience in the ways of new pups and we were young, naive, and confused. We’d read that this was what we were supposed to do, so why wasn’t it working? What were we supposed to do when all the books didn’t give the answer? After sixty two hours I couldn’t take it anymore, so I went downstairs where I saw Cozy sitting up in her crate with her head back, howling her heart out in an effort to be saved. When she saw me she stood up and wagged as if to say Thank you Daddy! Did you hear me? Did you see the wolves? I was almost eaten! It was awful! But now you’re here and we can PLAY!

Books be damned! I opened the door, picked her up and carried her upstairs. Lauren and I carried the crate upstairs and put it at the foot of our bed. If she wanted to be with us then she could sleep in our room, a concession that seemed like a good compromise to the both of us, learned readers of books that we were. We closed her up in the crate, gave her some kisses through the side and got back into bed.

I had lived on farms and in remote locations my entire life. We did not have any children at this point in our lives, and dammit I liked it quiet when I slept. When I was in my 20’s I could go back to work after only two hours of sleep, but the older I got, the more sleep I needed. If I didn’t get my sleep and a nice double espresso in the morning, I risked having a psychotic episode by 11 A.M.. Cozy, it seemed, cared not for my wants or supposed needs. All she knew was that being locked in a cage was a sure way to get eaten by wolves. The howling continued in earnest.

I got out of bed and sat by the crate. Cozy stood up and wagged with her whole fuzzy adorable body. I tried to talk some sense into her. “Cozy bear (her first nickname), we need to sleep. We’re right here good girl! We wouldn’t let the wolves get you!” She eagerly licked my fingers between the wires of the crate as if she understood everything I said. I turned out the lights and went back to bed.

I’ve read that our brains are wired to find crying babies irritating. An abandoned baby’s cry attracts adults who are genetically programmed to care for the baby, or so the theory goes. There was something about Cozy’s cry that was similarly irritating while simultaneously heartbreaking. This wasn’t a simple whimper, but rather an all out attack using advanced psychological warfare. The sound was unnatural; it sounded like a lonely puppy scraping its nails on a chalkboard in Hell.

“Screw it!” I pulled the covers off of my side of the bed, stormed over to the crate where I was met with an enthusiastic Cozy. Daddy! Did you hear me? Is it play time? I opened the crate and Cozy came bounding out; twenty pounds of lightning in a black fur coat. I let her romp around the room for a few minutes, then as she settled down a bit watched her sniff every square inch of the floor. We had shut the door to prevent her from escaping, and since we had removed everything in the house from the floor to about two feet up in a process we called puppy proofing, figured that the worse she could do was pee on the carpet during the night. 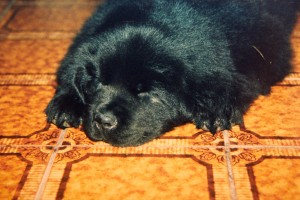 I left the door to her crate open, turned off the light and got back into bed. She curled up next to my side of the bed and promptly went to sleep.

Just like that, the howling was over. Cozy wasn’t afraid of wolves, and she wasn’t afraid of the dark. She wanted to be near me and she wanted to be near me on her own terms. Her crate, not four feet away lay open and uninhabited while Cozy slept on the floor. She would never voluntarily use the crate again. Our new puppy had been home for all of six hours and she was already making the rules.

Lauren looked at me in the dark and trying to keep quiet so as not to wake the shrieking demon on the floor whispered, “We are so screwed”.

Truer words had never been whispered.

One thought on “Cozy Tales: 3. Homecoming”