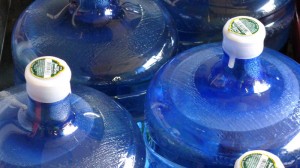 Since we live in a very rural area, we have a well, and the well pump runs on electricity. While many people complained about not having any hot water, like most of our neighbors, we had no water. A lack of hot water means being unable to take a comforting, hot shower. No running water means no flushing toilets.

The average person can survive for about three to five days without water. We have Poland Spring water delivered to our house, and we always have at least four five-gallon jugs of clean, drinkable water available. With four of us and two dogs, in a worst-case scenario of one gallon each per day, we have water for 3.3 days. None of us consumed one gallon per day, especially at the beginning when we still had bottles of other things to drink. We went through about one 5-gallon jug per week, and that included giving the dogs water. Note that we only use this water for drinking, possibly cooking, giving the dogs water, and things like brushing our teeth. The bigger issue by far was the water consumed every time a toilet was flushed.

Of course we had thought ahead, being the experienced, power-failure experts that we were. We had filled the bathtub with water, and had filled four empty 5-gallon jugs with water just for flushing. We thought we were prepared, and we were – for a while. Let’s look at some simple numbers:

Do the stinky math. 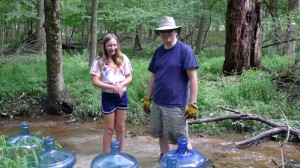 What saved us in the past was the fact that we have a healthy stream in the woods behind our house. In 2011, during hurricane Irene, we were without power for five days. We made a trip to the stream and filled up empty jugs when our water supply got low. Here you can see Meghan and me standing in said stream, posing for a picture (courtesy of Colleen). Standing in the stream was fun. We got wet, we joked around, Meghan lost her sandal in the muck – it was a blast. It was also August, and warm enough to be wearing shorts and a t-shirt while standing barefoot in a cold, flowing stream.

This time, our extended power outage occurred in November, and it was cold. The very idea of walking to the stream brought chills, never mind standing in it. Luckily, the local firehouse was running on a huge generator, and offered potable water via garden hose for anyone who needed it. We filled up jugs on three separate occasions, all just for flushing toilets. With four people in the house, the toilets used a lot of water. 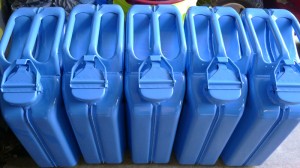 Seriously, toilets consume a lot of water. If you have an electric well, be prepared with water for flushing. Lots and lots of water. Since Hurricane Sandy, and after my decent into madness trying to find metal gas cans, I discovered that there are also NATO cans for storing water. Naturally I bought a couple. Or five.

These cans are coated inside and can be used for drinking water, but my purpose for them is toilets. In a worst-case emergency, the water could be purified, and I have a few means of doing so. I’ll let you research that little doomsday prepperism for yourself. By the way, all those NATO cans look really cool next to my red NATO gas cans.