Shelter is one of those things that many of us take for granted. You need to be safe from the winds, the rain, the storms, and whatever else nature can throw at you.  If 70 mile-per-hour winds knock a tree into your bedroom, you’ve suddenly got a compromised shelter. If your shelter is compromised, take steps to find new shelter, fix what you have, or both. Many survival schools teach students to make a shelter before even starting a fire when lost in the woods. In our case, our house was thankfully unscathed, but there were many people sleeping in church, firehouse, and Red Cross shelters in our state. Don’t be afraid to use such services if you need them. 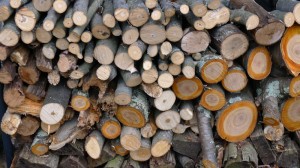 With shelter taken care of, the next immediate need in the winter is warmth. This is one category where I thought we were prepared, and we weren’t. We have a wood-burning insert in our fireplace which keeps almost the entire house warm when the power is out. We had some wood, and I had bought some kiln-dried firewood just in case we ran out. I had figured on a few days without power, and that’s how long the wood lasted. Since we were burning wood on a 24×7 basis, we went through it at an alarming rate.

Every day I would keep the fire running and the house would stabilize at about 58-60 degrees Fahrenheit. When I would wake up in the morning, the house would be back down to 50 degrees or lower. It was a constant, daily battle to keep the house warm using only the wood-burning stove. After the first few days the novelty wore off, after which it felt like we were working to survive, which to an extent, we were.

When the wood ran out, I had to cut up more with the chainsaw. Every other day I would cut up enough wood for two days. If that seems short-sighted, consider that two day’s worth of wood turned out to be a full firewood holder that measured 2’x4’x8′. Yes, we burned roughly a half-cord of wood every two to three days. On day 11 I woke up to a 46-degree house, due to the outside temperature being a brisk 25. That was too cold, I was too tired, and I’d had enough.

Lesson learned: Burning wood to keep from freezing can consume a lot more wood than lighting an occasional fire to set the mood. Know how much you really need and stock up before the storm. 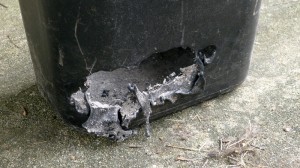 Safety is important with fireplaces, and since I’ve been using them for decades, I was pretty well versed in their safe operation. Still, having only used the fireplace for things like ambiance, making s’mores and the occasional short power failure, I had always stored the ashes in a plastic garbage pail. I knew this was wrong, but since I usually waited days for the ashes to cool before removing them from the firebox, it had never been an issue. This time, with the constant use, the ashes were removed daily while trying to keep the larger coals and embers in place in order to maintain the fire. The result was what you see in the picture: a melted plastic trash can that could have led to a house fire. Luckily I knew it was a possibility and had put it outside before I went to bed.

Lesson learned: have a metal ash bin for inside and a metal ash can with a lid for outside. Using a fireplace or wood-burning stove is a different experience when you’re using it every day. Be safe.