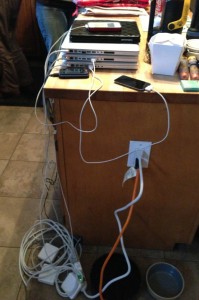 I like to think that I can live in a cave without all of the modern conveniences. IPads, Laptops, cell phones – they’re all just distractions and we can do without them, right? The truth is that we made multiple trips to a generator-powered friend’s house in order to charge our many “necessities.” Based on frequency, keeping these devices charged was seemingly more important than taking a shower. Harumph. To be fair, I can charge a laptop in my car. It is admittedly difficult to take a shower in there.

On day 12 of our 14-day adventure, I woke up to a house that was only 46 degrees Fahrenheit. That was the point that I said, “Screw this!”, and went out to buy a generator. Believe it or not, I found one too. I even got the transfer switch so that it could be properly wired into our service panel. We will never have to go through such an extended outage again. Or will we?

The generator is great. It runs for 10-12 hours on a tank of gas, is quieter than most of the generators out there, and it powers about 90% of our house. It rocks. It also has a six-gallon gas tank, which means while I’m used to buying two cans of gas every summer, those same two cans of gas would last only 16 hours while using the generator. Damn. 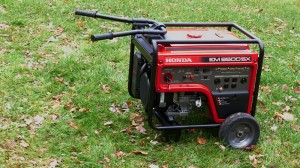 With the generator on, gas is consumed at a surprising rate. We had both planned ahead and filled our cars with gas, and I even had two 5-gallon cans ready in the garage. The generator went through those in short order, and suddenly we were out of gas. Luckily, we ran out of gas just as the power came back on, but the message had been delivered to me loud and clear – I needed a way to store considerably larger volume of gas than I’d ever thought I’d need. 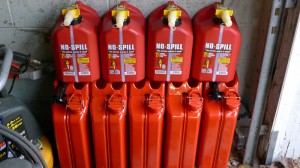 After some serious whining about the current state of gas cans in America, I bought some NATO gas cans and some No Spill cans, and then proceeded to lay out my gas storage plans. Gas doesn’t keep forever. In fact, depending on the gas and method of storage, it might “go bad” in as little as a few months! If you’re storing gas, first of all, be safe. Then make sure that you’re rotating your gas so that when you do need it, it will still be good. There are plenty of resources online that talk about storing gas, so I won’t waste more words on it here.

Lesson learned: We didn’t have enough gas, but then, we didn’t have a generator at first either. If you get a generator, make sure you know how to use it, and make sure you have enough gas. Make sure that more than one person is trained on how to hook up and start the generator, and consider that not everyone is capable of lifting those heavy gas cans. Finally, make sure that you have somewhere safe to store all that gas.

I put together a document with pictures and a checklist, and put that all in a red folder near the transfer switch. My 13 year-old daughter can hook it all up and keep it running if I’m not home. In fact, I think I’ll make her do it even if I am home. That thing is heavy!

Imagine being without power for two weeks. You’re dirty, tired, cold, hungry, and lets be honest, probably jonesing for some quality time-wasting of the Internet variety. Not only can power dip and surge for a while after it’s been restored, it can be down-right dangerous.

When our power finally came back online, everything seemed OK, if marginally so. I normally wait a few hours to bring the computers back up because I know to wait for the street power to settle down. This time we did have some sags, and a couple of surges, but for a week they didn’t stop. In fact, they seemed to get worse. 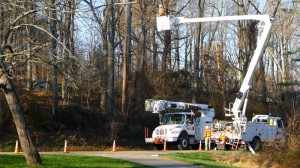 When the power was restored, I have to imagine that it was done by people who had been working 12+ hour shifts for two weeks straight. These poor guys were tired. When they wired our house up, they missed the fact that we had lost the neutral leg of our power. This led to our well becoming the ground, along with roughly 240-volt surges on our 120-volt lines. Since we have a 120-volt well, it was very unhappy with the double voltage, and after complaining for a few days, shut itself off right as my lovely wife was in the shower with a head full of shampoo. To say that she was unhappy would trivialize the rage she unloaded on me. Hey, at least she could take a shower.

Having lived through a $3800 well repair once before, I immediately cut off the well pump from the street power in order to protect it. Almost immediately, the cable Internet feed went out. What next! It turns out that the cable going out was about the best thing that could have happened. While cutting off the well pump was great for the pump motor, it removed the nice ground path being used in lieu of the neutral feed, so the electricity found the next best thing – our cable TV line. 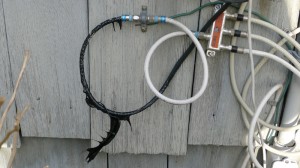 Since the cable TV installation was properly grounded (thankfully), the path was short. The impact to the cable was, shall we say, not good. The insulation on the cable was completely melted from the heat caused by routing 240 volts of AC power through the little cable shield. This certainly beat the alternative of possible electrocution or house fire by a country mile.

Lesson learned: Don’t blindly trust the power when it comes back on. In our case, I called the electrician who, after I described the problem, told me over the phone that we had probably lost neutral. Between his advice, my cutting off the well pump, and the properly grounded cable installation, we suffered no damage or injury. We were lucky. If you see the lights getting brighter and hear buzzing after the power comes back on, call an electrician.