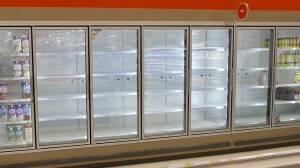 Imagine that you’re at the center of a 100-mile wide circle where there is no power. In other words, there are no stores open for 50 miles in any direction. You can’t just go to the supermarket when they’re all without power. After about 10 days, stores started to open, but the shelves and coolers were largely empty of things like bread and milk.

You can’t go out to eat when no one has power. A couple of enterprising local eateries had thought ahead, stocked their coolers, bought the proper generators, and were able to make pizzas in an otherwise dark world. They made a LOT of pizzas. They even donated many pizzas to the local shelters. That’s great, but pizza every day, three meals a day gets old fast, and it’s not the best source of nutrition, either. Better to stock up before hand. 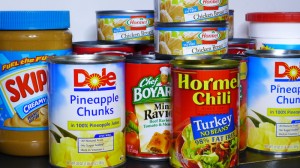 The easy, obvious choice is vacuum-packed, canned food. It lasts damn-near forever, is often delicious, and can be stored almost anywhere. Its main drawbacks are size and weight. We have a small house, and storing enough non-perishable food for two weeks or more can take up a lot of space – space that can otherwise be used for guitars. Or clothes, I guess. Whatever. Seriously though, canned food can take up a fair amount of room, especially when you consider how much it might take to feed a family of four for two weeks. Be careful when buying these stocks. It’s easy to buy tasty things with little nutritional value. On the flip side, allow yourself to have some fun meals. Eating out of cans gets old quickly.

As a side note, I’m experimenting with freeze-dried foods. These are light and can be stored more efficiently, though they do require precious water to reconstitute. From my initial testing, they can be delicious, and they’re much better if you have to bug out and carry your food with you. They can be expensive, and also high in salt, so plan accordingly.

Some people like to pack Meals Ready-to-Eat (MREs), but I can tell you that eating MREs is a morale-killer. Nothing drives home the feeling of “we’re all going to die” like eating military surplus rations. Given the choice, I’ll take Dinty Moore Beef Stew every time. There’s a saying amongst survivalists that says, “store what you use, and use what you store.” Simply put, try to stockpile food that you would normally eat, and make sure you cycle through it regularly. Unless you’re eating MREs for dinner once a week, they should be reserved for your last-ditch emergency bags. Same with the freeze-dried stuff. 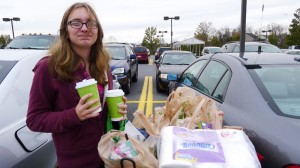 After about day two of Hurricane Sandy’s aftermath, I felt like we were going to be in this for the long haul, and had a bit of a episode. We needed gas anyway, so I took one of my daughters on a road trip to Pennsylvania. We bought a shopping cart full of food, had some delicious hot coffee, and headed back home, my anxiety abated for the time being.

In my panicked buying frenzy, I purchased far too much junk food, absolutely no meat, about 350 pounds of canned soup, and four giant cans of Manwich sauce. In my defense, the Manwich cans showed delicious meaty sandwiches on the label, and I thought that the cans were therefore filled with tasty meat. Personally I think that Hunt’s should be brought up on charges of false advertising. Hey, what can I tell you? I’m an idiot. I’m surprised I didn’t think that there were buns in the can too.

Lesson learned: Stock up before the big storm, not during or immediately after, and stock up on food you would normally eat. Oh, and you can probably skip the Manwich sauce.

Hot food is another one of those things that most of us take for granted. We have a propane grill on our deck, and we used it every day. We had plenty of propane for it, but due to the duration of the outage we learned a couple of things. First, cooking on a grill outside isn’t much fun in the cold wind. Additionally, since it was so cold and windy, it took much longer, and therefore much more fuel, to cook anything. We learned that we could cook just about anything using the grill, and even cooked a large frozen lasagna.  It probably wasn’t completely frozen since we were trying to use food from the freezer before it went bad, but that was the first time we’d tried to use the grill as an oven.

One difficulty with the grill was that we weren’t used to using it in the dark. We have a couple of tiki torches on our deck that helped with light, which was good because grilling with a flashlight in your hand is a great way to drop your precious food onto the deck or your flashlight into the fire. 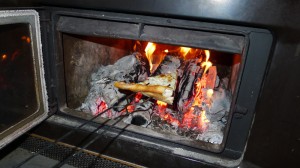 We also reheated pizza in the fireplace which was fun, and tasted surprisingly great. Since the door to the wood-burning insert is so small, it was difficult to cook anything else in there, but hot dogs work great if you have something to cook them with. You can also make toast if you have a deft touch. This slice of pizza is being heated using a s’mores/hot-dog fork made for fireplaces. They’re a great tool to have in your fireplace set, especially if you like roasting marshmallows.

One of the issues we had was dirty dishes, which I’ll expand on a bit later. For now, consider that it’s difficult to wash dishes without any running water.

Lesson learned: have plenty of sturdy paper plates, plastic serving-ware, and sturdy disposable cups. You’ll still need pots and pans for cooking, but paper plates can either be thrown out (a problem when there’s no trash pickup), or tossed into the fire.

One last note about food: don’t forget your pets! We have two ravenous, huge dogs in our house, and they rarely eat people-food, so making sure that they had enough food was also a priority. Luckily we have space set aside for their food, so storage was not a problem. Still, we only had one week’s worth, and we were without power for two weeks.