We had no cell phone coverage for three days. Now I’ve always maintained that cell phones are a luxury, and that most people are far too dependent on them, but what I learned is that we all have come to assume that they pretty much always work. Many people (us included), keep them charged because they’re a great way of communicating in an emergency. Well, here we were in an (admittedly mild) emergency, and the cell phones were out. This made us all feel very isolated in a way that was unexpected. With no TV, no Internet, and no cell phones, we had no source of news. That may sound ridiculous, but remember that I’m a survivalist at heart, so I pulled out the AM/FM transistor radios, only to find that all of the local radio stations we normally listened to were off the air. We felt like we were in a zombie movie, but without the entertaining distraction of being able to snipe rogue walkers of the undead persuasion. 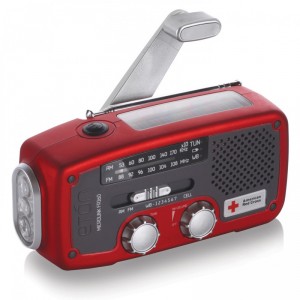 By the way, we had one of those survival radios with a built in flashlight. It was solar so that  it could be used long after the zombies ate all the batteries, and it had a crank so that it could be used after some supervillan plunged us into a world of total darkness. Dammit, I like to be prepared! I’d used it in the past, and the kids always loved cranking it in order to make the radio work. Well now that was really needed it, it was dead. The solar panel was useless, the crank would barely turn, and it had become nothing more than another source of frustration, and nothing boosts morale during an emergency like frustration. I’ve had four or five of these things over the past few years, and every last one of them has turned out to be junk. This thing was a survival radio and it hadn’t survived being in a bag in my closet. It was more robust than most, and had cost almost forty bucks, but in the end, it was nothing more than a useless piece of false security. Never again. 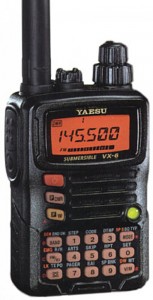 Lesson learned:  Crank radios are toys that can’t stand up to any sort of abuse. I’ve seen “ruggedized” models that are encased in tough-looking covers, but compared with my MilSpec (and submersible) Yaesu ham radios, they’re plastic junk. I’m not against having them, but don’t rely on them as your primary means of news or light in an emergency. In my opinion you’re far better off with a rugged radio and light that takes commonly available batteries. It’s easy to find AA and CR123 batteries with a shelf life of 10 years. Keep a stock, cycle through them, and don’t fall prey to the false sense of security offered by these cheap crank radios. Even my Ham Radios offer AA battery packs so they can be used in an emergency.

Our saving grace during the first week or so was a local radio station (WRNJ) that spent pretty much all of their broadcasting time helping local residents in some way. It was through listening to this station that we discovered that the firehouse was giving water, that the local first aid squad was hosting dinners, and what was being done about the ongoing power outage (which was pretty much nothing). We even bought our generator from a business that advertised on this station. Sometimes it seemed like the 1940s while we all huddled around the radio, eager for news, while we bundled up next to the fire to stay warm. Surprisingly, before the storm, we had no idea this station even existed. I can tell you that due to the stellar job they did during Hurricane Sandy, that our radios will be set to WRNJ the next time we’re in this situation. 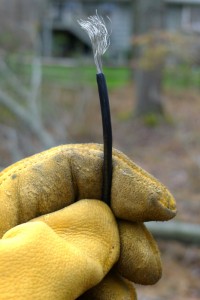 By the way, I have a ham radio license, and I was able to use my battery-operated 2-meter radios to get local information (as well as AM/FM broadcasts), but my larger HF radios were useless without power. That’s now solved with the generator, but the off-center-fed dipole antenna that I strung up into the trees was taken out by falling limbs. The picture to the right shows what was left of my antenna, which had previously been strung up about fifty feet in the air. Nature always wins in the end.

We live in an always-connected world where we are assaulted by information 24 hours a day. Pull that away in an emergency, and you suddenly feel like your in one of those movies about the end of the world. It was creepy, and it was unsettling. Luckily, there are ways to escape the creepiness, and they all center around keeping busy.

I should have realized that letting everyone sit around and sulk was the worst possible thing to do. We figured that this would be over in a few days, but as the days stretched on, I realized that everyone’s mind was starting to race about the possibilities. I’d like to say that I wasn’t affected by this because I grew up an only child on a farm where I learned to be self reliant, and maybe that’s partially true. Really, though, I think that I was too busy to worry about it. Since it was cold, I spent every day cutting wood, obsessing about canned food, tending the fire, making sure there was light at night, and generally doing the survival thing.

After about a week, my wife started to get really unhappy. She started lashing out at everyone about trivial things with no provocation. With all the extra supplies, the kitchen was a wreck, and with no running water, we had a sink full of dirty dishes. . One day when she went out to walk some of her client’s dogs (a daily task that I believe was a huge help because it kept her busy), I set up a little dish washing station and over the course of two hours, washed all the dishes, emptied out the trash, and cleaned up the kitchen. The next day she was back to her normal self, or at least as normal as one can be without power, running water, heat, and a working town infrastructure.

Lesson learned: One miserable person leads to a house full of miserable people. If you see someone suffering, try to help them out in any way you can. My point has nothing to do with dirty dishes, and everything to do with managing morale. Sure, I could have slapped her around like a hysterical stewardess in a 1970’s airplane disaster movie, but I’m pretty sure the dishes thing was the right way to go. Having a clean kitchen made her feel more normal, and that’s the edge she needed. Getting Internet back might have had the same effect, but I had no power over that, and besides, washing the dishes kept me busy. 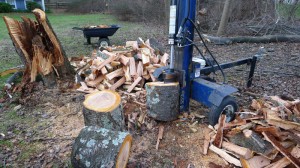 After about three days we got cell service back, but it was spotty and the towers were overwhelmed. After about a week, my phone started to get a good, clean data signal, and since I pay for tethering, I could offer Internet to everyone in the house via WiFi. But I didn’t because I’m a heartless bastard.

I was tired of the kids sitting around waiting for the world to end, so I put forth the following rule: For every hour they spent helping me gather wood, I would give them one hour of Internet access.

Needless to say, they hated me. Hey, welcome to the slightly Internet-connected world of the otherwise powerless 1800s. They’ll never admit it, but they felt better while staying busy and getting some exercise in the cold. Plus, the seething hatred that smoldered in their bellies kept them warm at night. Yeah, I do what I can. 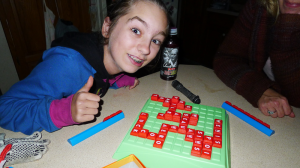 The staple for power outages in our house is board games. The problem was, we only had a couple, and we had no power for two weeks.

Lesson learned: buy more board games! We were thrilled when the toy store in the next town opened on about day 10.

We also managed to do other silly things. We made s’mores in the fire, we cooked marshmallows with candles, we reheated pizza in the wood-burning stove, and we read a lot. If you’ve got a Kindle, make sure it’s charged before a storm, and make sure you’ve got books, then turn off the wireless. The battery on my Kindle will normally last almost a month. On day three I realized that I’d left the wireless on and it was dead. Bummer.

One thought on “Hurricane Lessons: Morale”