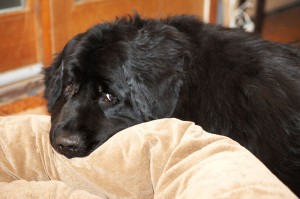 Mr. Guinness is a very brave boy. For example, he has scared off hundreds of very dangerous bicyclists from the road in front of our house. His fence is probably 150 feet from the road and the cyclists don’t even know they’re being barked at, let alone by whom. But he barks, and then they’re gone, so clearly he scared them away. For these and other acts of bravado, we award Guinness with constant commendations for bravery befitting a proper Newfoundland dog.

In other words, we tell him to shut up about thirty times a day.

Still, he is very brave, and even the zombies in the woods are kept at bay thanks to his incessant barking. Sure he’s afraid of thunder, but who among us hasn’t cowered under a desk in the dark, convinced that the end was nigh during a particularly violent storm? I dare say we all have our bogeymen. Guinness just has a few more than the average neurotic.

One bogeyman, of particular virulence, comes in the form of a terrifying creature that seems to visit in the dark of night, once every couple of years or so. I imagine that Guinness calls him, Mr. Beepers.

Poor Mr. Guinness doesn’t have the cognitive ability to piece all this together, nor the opposable thumbs required to open a Macbook, so I’ve offered to help him spread the word of this truly horrifying menace that humans call the smoke detector.

We have a pretty small house, so we have two smoke detectors: one upstairs, and one downstairs. About three months ago, the battery in the smoke detector downstairs ran low, and as any well trained smoke detector will do, it let out a simple beep every five minutes. That way, the owner of the house could be constantly reminded what an idiot he is for not changing the batteries like he should have. Mr. Beepers apparently likes to insult homeowners too. 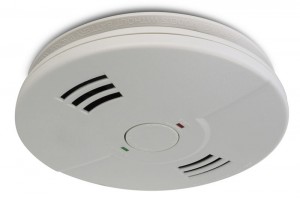 Now Mr. Beepers is the scariest sort of bogyman, because he has no conscience, no soul, and no empathy. He is utterly unforgiving, and will not stop until you’ve gone mad with fear… or you change the battery. But let’s remember that Guinness is only about three feet high, and he doesn’t have any thumbs. That makes it much scarier for him.

When Mr. Beepers comes a’ calling, there is only one thing you can do:

Of course I’m paraphrasing. It’s hard to talk to Guinness when he’s panicked. And let me tell you, when Mr. Beepers is in the house it’s pretty hard to find the big guy, let alone have a conversation with him.

When Mr. Beepers first came to visit, he even had a terrifying voice that said, “Low battery!” in a deep, mechanical baritone. This was when Guinness was first living with us, and he naturally jumped into the shower with Lauren to escape the disembodied voice. He wasn’t yet acquainted with the layout of our house, or perhaps he had not formulated his detailed plan (GET OUT!). Either way,  Lauren, unable to move with a giant wet dog in the tub with her, kicked the poor boy out of the shower. He then came roaring down the stairs, ran into the office, damn near knocked me off of my chair and proceeded to crawl under my desk and shake. I couldn’t do any work for almost an hour as I tried in vain to convince him that all was well.

This time, almost two years later, Mr. Beepers came to visit early in the morning. Guinness tried desperately to GET OUT!, but some idiot had locked all the doors. Fools! Mr. Beepers prays on those who lock their doors. Guinness ran in to get help from the Daddy, but he was sleeping. He then ran to Meghan’s room, but she was getting older and shut her door, and you needed thumbs to get in there. Panicked, he did the only thing he could think of — he ran into Colleen’s room, where he leapt up into her bed so she could protect him.

We were amazed to learn of Guinness’s newfound dexterity, since he still had a bum leg and wasn’t really much of a jumper. Poor Colleen was still asleep when the big lummox jumped into bed with her, but Guinness didn’t care. He just needed someone big and strong to hold him and tell him it would be OK. I don’t see how Colleen qualifies as big and strong, but he knew that she was above him in the pack’s hierarchy, so it was her job to take care of him.

Having a 130 pound dog in your bed who is looking for comfort is a problem. Having the other 130 pound dog come in and sit on your bed so she can be part of the fun is just stupid. Annie, who needs to be the center of attention at all times, decided to walk into Colleen’s room and sit on the bed. You know, for moral support. While Guinness hid under the covers, Annie sat up looking for love, no doubt wondering what all the beeping was about.

Annie doesn’t sit like a dog. She thinks that she’s a person, so she puts her butt on the bed and leaves her front legs on the floor. Sure it looks cute, provided you’re watching from the doorway and not trying to sleep in the bed filled with dog. After being squashed, nudged and generally harassed, Colleen got out of bed and tried to wake up Mommy in an effort to be banish the canine horde from her bed.

When Mommy finally woke up and let the dogs out, Guinness bolted for the door, ran down the steps, and proceeded to hide behind the butterfly bush. To be fair, it is a very manly butterfly bush — perhaps the most masculine of its kind in our yard. He wouldn’t even be tempted out by his breakfast, which Lauren had to bring to him in his fortress of solitude, safely away from Mr. Beepers. My guess is that Mr. Beepers is terrified of butterflies, so the very manly butterfly bush was a perfect place to take cover, regroup and formulate a new plan. Because that’s what brave dogs do.

Mr. Beepers was banished by someone with thumbs that day, and Guinness eventually came back inside. Guinness knows that it’s only a matter of time though before the nightmare returns though, because Mr. Beepers always comes back.

7 thoughts on “Mr. Beepers and the Fortress of Solitude”