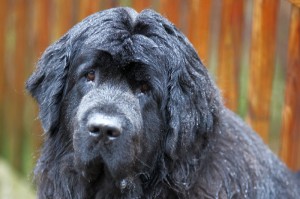 Brave Guinness doesn’t like thunderstorms. I know that many dogs dislike thunder, but I find something funny about a 140 pound zombie hunter being afraid of loud noises.  Usually the big baby finds me and hides under my feet when the thunder starts. I guess I’m the alpha-male, so he knows I’ll protect him. On the night of this tale I was traveling, so Guinness was the resident alpha-male, though I don’t think he understood what responsibilities the title imparted.

The alpha-male’s job includes keeping order, doling out discipline, providing for the pack, and protecting against threats both foreign and domestic. Guinness is a natural disciplinarian where Annie is concerned, but he’s not a very good provider. He thinks that he’s a good protector,  and has proven his worth by barking in alarm any time we have built snowmen, piled up bags of potting soil, or introduced any other changes to his environment. He also protects us from the random hoards of evil bicycles that roll by from time to time. And let’s not forget his tireless crusade to keep our property free from the walking undead.

We don’t have central air in our house, and instead rely on room air conditioners and a whole-house fan to keep ourselves cool. In the days before Guinness had his own air conditioner, the girls shared a room, which at the time, was also was devoid of a magic cold box. The poor kids not only had to suffer without AC, but they also missed out on the whole house fan. You see, they had to keep the door closed in order to keep the ferret-dog from eating their treasures during the night. The girls slept on bunk-beds, and when it got hot, the top bunk was a good 300 degrees hotter than the bottom bunk. On hot nights such as this one, Meghan would choose to sleep on the floor where it was cooler.

As the thunder rolled in, Guinness started to freak. He came looking for me, but I was not home. Panicked, he went from room to room, looking for a place to hide. He loves to hide in the office downstairs, but I keep it closed up when I’m not home to protect my stuff from you-know-who. Guinness nervously paced about the house in the middle of the night while the thunder boomed. I imagine his thought process being something like this:

Finally, panicked and out of ideas, Guinness nosed the door to the girl’s bedroom. To his surprise it swung open. He pushed his way in, carefully stepping around strewn clothes and stuffed animals, where he found Meghan sleeping on the floor. She wasn’t the man, but Guinness knew that she was above him in the pecking order, which meant she could protect him. Guinness curled up next to Meghan on the floor, no doubt shaking like a frightened baby. Meghan briefly woke up, put an arm over the giant dog’s neck and told him it would be alright.

In the heat of the night, Meghan comforted the giant beast. He spent the night there in the arms of his protector where he finally drifted off to sleep, safe at last from the torturous, booming thunder. His savior, a 10-year-old girl of stout heart and gentle touch, had become the stuff of legend among zombie-hunting Newfies everywhere.

2 thoughts on “Guinness the Protector”