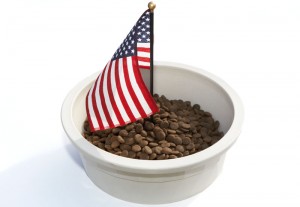 If Guinness has one fault, it’s that he can be a bit protective of his food. We’ve gone to great lengths to make him understand his place in the pack, so he has no problems with humans. The kids routinely feed him and put things in his bowl while he’s eating. They’ve taken thing from his bowl too, though they both know better. At least I thought they did. Some days I’m amazed my kids can remember to breathe on their own, but this is a story about dogs, so I’ll spare them further reflection on their continued absent-mindedness.

Guinness doesn’t like to share. I know that’s not unusual for a dog, but Mr. Guinness grew up as an only dog and never had to learn. Imagine a world where every toy, biscuit and kibble is yours. Now imagine being thrust into someone else’s house where a crazed ferret-dog thinks that everything belongs to everyone. That, my friends, is a recipe for conflict.

Annie lives a life of a pure socialism. What’s hers is yours and what’s yours is hers. All resources are freely available to anyone who needs or wants them. She is happy to share. In fact, she insists that she share her toys, drool, love, drinks, fur, mud, and bad breath with everyone she comes in contact with. She’s a very giving dog.

Guinness, on the other hand, is a pure hard-core conservative. In his view, what’s his is wholly his, and woe be to anyone who should try to take it. Guinness is the biggest baby in the world, but if he had thumbs, I’m pretty sure he’d have guns. He’d also have alarm systems, mine fields and a perimeter of trip wires and sensors reporting heat signatures to a central control room where he could monitor threats to his stuff.

Luckily for us, Guinness doesn’t seem to like toys. If the dogs fought over toys, our house would be nothing but a smoldering crater in the ground by now. No, the toys are all Annie’s. Food is the problem.  Kibble, bones, cookies, pizza crust—it doesn’t matter. If it’s food, it’s his, and by God, he’ll protect what’s his from the left-wing she-beast. The price of dinner is eternal vigilance from socialistic ferret-dogs.

As a result of the big guy’s short temper come meal time, Guinness is fed inside, and Annie is fed outside. The dining room leading to the sliding glass door is a sort of no-man’s land where political ideologies are irrelevant. If you enter the zone, your incursion will be met with force, or at least snarling and barking. Actually only one side in this conflict has the zero-tolerance aggression policy. Annie just wants to share. She doesn’t even realize there’s been an armistice, let alone that a zone for it. If we opened the door, she would run headlong through the sentries and barbed wire, sniff at his bowl and try to sneak a taste. At least we can count on consistency with Annie.

This time we fed Guinness downstairs. He was resting there, so Lauren brought him his dinner. When I lay on the couch and it’s dinner time, I get yelled at from the top of the stairs until I haul my lazy ass upstairs. Guinness is only a dog, so his dinner is brought to him in a manner befitting a king. Annie ate outside on the deck where she belonged, happy to go where the food was. As usual, she finished in seconds, so instead of staring at the upstairs door to see if Guinness wanted to share, she ran downstairs to look in at him through the family room door. You know, to see if he wanted to share. Everyone likes to share.

Guinness was not particularly hungry, nor was he in a sharing mood, so he was lying on the floor next to his bowl. The kids and I were watching a particularly cerebral movie entitled Legally Blonde, when Guinness let out a low, guttural growl. I looked at him, wondering what the problem was. I followed his gaze and saw Annie standing some eight feet away, outside the glass door. She was wagging her typical Hi! Want to share? after-dinner message.

It’s been almost two years, and Annie (by all accounts, the smart one) had yet to figure out that Guinness never wants to share. She stood there wagging, and he lay there growling. This is what I like to refer to as the Newfoundland Standoff. Annie is happy, and Guinness is grumpy. Annie wants to share, and Guinness thinks sharing is unconscionable. What we had here was a microcosm of the world’s conflicts, and I was in the middle. Two superpowers had met on a field outside the mutually acceptable demilitarized dinner zone with no one to negotiate but me. I wasn’t smart enough to avoid watching Legally Blonde, let alone mediate an escalating conflict of political ideologies.

The only problem with this conflict was the sliding glass door separating the dogs. Guinness couldn’t get to Annie, and Annie couldn’t get to his dinner. Logically, this should have meant that there was no conflict. They couldn’t even hear each other. This was a dog-proof barrier with the only means of bypass requiring thumbs. There was no way that Annie could hear him growling at her, so she kept wagging, and he kept growling.

As Annie stood there with her happy wagging tail, Guinness became more and more agitated. His growling escalated to snarling. Annie responded with a smile and a wag. Her continued acts of aggression were too much for Guinness. He sat up, lowered his head and growled with an intense stare. Annie, still unable to hear, wagged harder. I think maybe she she thought that he was sitting up in order to invite her in for dinner and a hug.

Finally, Guinness couldn’t take Annie’s constant… being there… and lunged at her. For all his ferocity, he was now about three feet closer to the closed door where Annie continued to smile and wag. This was possibly the dumbest dog fight I’d ever witnessed.

Now I was pissed because I had to pause the movie just as Elle was winning her case and saving the day. I took his bowl and brought it upstairs, then came back down and let Annie in. She ran over to Guinness, wagging all the while, wondering why he wasn’t giving her a hug. He snorted at her, turned away, and just like that the conflict was over.

So the lesson learned from this experience was… come to think of it, none of us learned anything. I did develop a newfound appreciation for just how stupid my dogs can be. Then again, they were smart enough to avoid watching Legally Blonde, so who am I to judge?