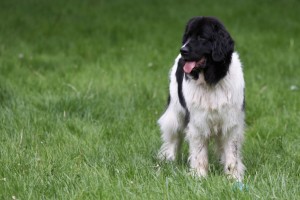 There are zombies afoot. Our woods are full of the shambling undead. Of course we’ve never seen them, but we know they’re there. My Cozy first noticed them many years ago, but to read that story you’ll have to buy the book I wrote about her. You know, the one that hasn’t been picked up by an agent or publisher? Yes, that’s the one. Let me know how you like it.

To summarize the most wonderful zombie-dog story ever written (but not read), I’ll just say that there were zombies in our woods, and Cozy kept them at bay for eight years. How do we know there were zombies in the woods? Well, they never got into the yard, so they must have stayed in the woods. The logic is irrefutable. I should warn you though that I have been told the operative word in my previous sentence doesn’t mean what I think it means, so draw your own conclusions.Every night, as darkness falls here in the woods of New Jersey, a wonderful series of events unfolds that leads to the nightly zombie invasion. In the spring time, the peepers wake up and begin their symphony of calls. For those who might know what peeper are, they’re innocent little frogs with the evil-sounding name Pseudacris crucifer. I’ve also heard them called tree-frogs, spring peepers, and believe it or not, pinkletinks. For the record, I refuse to call them pinkletinks, though if I combine the names, it conjures an image in my head of a medieval executioner, resplendent with his black hood, gleaming curved axe, and a pink tutu. I imagine his name to be Pinkletink the Crucifier, and woe be to anyone who would dare smirk at his pretty pink dress. 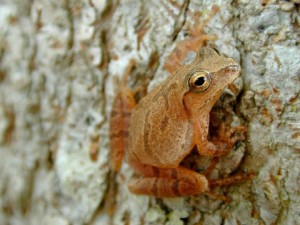 My Canadian readers might know of these ferociously carnivorous frogs as Tinkle-toes. You may safely assume that I will not be calling them by that name either. The peepers commence to peeping when the sun goes down, and they continue into the night. Regardless of what we call them, they are a wonderful sign that spring has arrived. I doubt the insects on which they feast think they’re wonderful, but hey – it sucks to be on the bottom of the food chain. Oh, and the sound of the peepers also means the zombies are coming.

In the summer we’re treated to different music from the woods at the onset of darkness. In the heat and humidity of the New Jersey summer nights, we hear the Katydids calling to us.  Katydids, according to Wikipedia, are also called long horn grasshoppers. I had no idea that grasshoppers had horns, but thanks to the Internet, I now have images of giant herds of Texas Longhorn Grasshoppers being driven over the great plains by Cowboy… er, Grasshopperboys. So now, not only do I have to worry about poison ivy in the woods, I have to worry about being gored by grasshopper horns? That’s just great.

I’d like to take a moment to personally thank my mother for gently shoving me over the abyss into madness many years ago. You see as a young lad, my mother told me about the Katydid’s song. Katydids make a very distinct sound that, when multiplied by the thousands, becomes a background noise that is easily ignored. The problem arises when you learn what they’re saying. Once you know the words, it becomes impossible to ignore them, and the decent into madness begins. If you pay attention, Katydids say “Katie did”. Three chirps – Ka-tee-did. That’s not the troubling part though.

One out of every 1,530 Katydids (trust me, I counted) is a rebel. He doesn’t want to be like everyone else. This Katydid stands alone, and if you listen for him, you will hear him. The ways of his peers are far too limiting, and for this trailblazer, three syllables are not enough. This forces those who stay in line to counter with an argument, and then all Hell breaks loose. The conversation goes something like this: 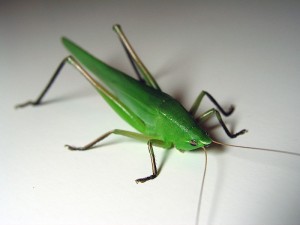 Once you hear the words, you can never un-hear them, and you will lie in bed for hours listening to the endless argument of the grasshoppers with the long horns. I don’t know who the Hell Katie is, but when I find her, I’m going to damn-well find out if she or did not. I don’t even care what it is she has allegedly done – I just want to know if she did it!

Aside from the peepers, the katydids (no she didn’t!), racoons, turkeys, deer, fox and countless other noisy critters in our woods, we also seem to have a serious zombie problem. Every night after the peepers start peeping and the grasshoppers sharpen their horns, the zombies rise. We’re not sure where they rise from. There are no cemeteries within five miles of our house, and the shambling undead just don’t move that quickly. Don’t talk to me about those newfangled running zombies either. I refuse to accept that they could exist. I’ve looked in the woods and never seen any zombie-sign – not even a footprint. Still, they must be there, somewhere… waiting.

Every night at roughly 10:00PM, the dogs go berserk. They face the woods and bark that special There are zombies coming – get the gun! bark. If you have a dog and a fence, then you know the bark I mean. I can hear all the other dogs within earshot barking the same They’re almost here – do something! bark. The dogs know. They know…

I managed to see how this all started one night. Annie was laying in the grass in the back yard watching the woods. Annie is a watcher, not a hunter. Just the other day she sat and watched a fox in the front yard as it happily munched on some clover, or zombie fingers, or whatever it is that foxes eat. She didn’t bark, she didn’t lunge, she just watched. I have no idea what goes through her ferret-dog brain, but she seems to be thinking, and let me tell you, that scares the Hell out of me.

So Annie was laying in the back yard, quietly watching, when suddenly, without apparent provocation, she let out a little wuf. Not a woof! or a WOOF!, but just a wuf. Within a second of that first wuf, Guinness came bounding down the stairs sounding the alarm. WOOF! WOOF! WOOF! As he got to the bottom of the stairs on the deck, Annie jumped up and joined him and they ran together to the fence barking the crazed bark of the zombie alarm. Within seconds the neighbor’s dog was barking, which cause their neighbor’s dog to bark. In the span of 15 seconds, every dog within 10 miles was barking furiously at… well I’m not sure what the cause of all this barking was, other than Annie’s original wuf. She must have seen a zombie in the woods. I mean, why else would she incite the neighborhood to alarm? Certainly not for the fun of it.  Stupid zombies…

6 thoughts on “Annie and the Zombies”