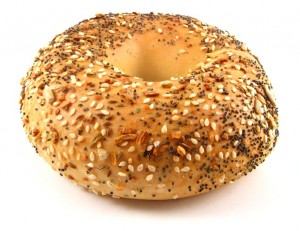 I like bagels. In fact, I don’t know anyone who doesn’t. I know two people who don’t like cheese, but that’s just weird. Bagels, on the other hand, seem to be universally adored. Of course now that I’ve put that in writing, I’m sure I’ll get a flood of comments such as “I find your wanton disregard for those of us who dare to dislike bagels, much like bagels themselves: distasteful!” These comments usually appear in a more succinct “you suck” format, but I’ve learned to read between the lines.  Allow me then to backpedal and say simply that I don’t know of anyone who doesn’t like bagels. But wait… that’s a double negative, which will get the pedants on my case, provided Annie isn’t already sitting on it. What was I talking about? Oh yes – bagels.Here in our house, everyone loves bagels. Since we live in New Jersey, we are lucky enough to have ready access to excellent bagels. And since I’m in a digression frame of mind, let me tell you that if the only bagels you’ve had came from a plastic bag in the super market, then you don’t know from good bagels! The bagel lovers out there know that a good bagel has just the right amount of crispness on the outside and a soft deliciousness inside that can only be achieved by hand rolling, boiling and baking them into culinary perfection. Sadly I must admit that this tale revolves around the lame kind of bagels that come in a bag from the supermarket. I am so ashamed.

As you might imagine, Annie is less discriminating in her tastes than I am.  She eats from the trash after all. I assume she eats garbage because she’s hungry, she’s bored, and knows it irritates the alpha-man in the house. Sometimes I think she just looks for trouble, and there’s always trouble in the trash. Sometimes we’re smart enough to actually empty the trash before we leave the dogs alone. Not often, but it happens. It was on one such trouble-seeking adventure that she discovered the trash can to have been emptied.

Usually Annie begins her rounds within seconds of our departure. How do I know this? Because the clever girl isn’t smart enough to ensure that we’ve all left before she start her adventures. More than once I’ve heard her run upstairs and head for the trash the second the garage door closes, convinced that we’ve all left her in charge. She doesn’t pay attention to the fact that I’m still in the home office on these occasions, and the pleasure I get from catching her in the act is immeasurable, except on those occasions when I fall on my face running up the stairs in my efforts to do so.

This time I was not home to catch her though, and the monochromatic ferret-dog was not to be denied, even though, as I previously stated, the trash had been emptied. I imagine she was quite put out by the discovery of the empty trash/snack can. Whether she proceeded out of hunger, boredom or just pure spite, we’ll never know, but I certainly have my suspicions.

As you may know, we have a fancy locking trash can in the kitchen, that Annie easily learned to unlock. She’s even been caught opening it right in front of us in an apparent statement of civil disobedience, even though I have repeatedly explained to her that she is not a citizen and therefor doesn’t have the right of civil disobedience. Come to think of it, it’s usually after these lectures that my socks go missing. I’m going to have to look into that.

So I imagine that Annie finding her tasty trash treats missing put her into an elevated state of… Annieness, which caused her to seek out new and interesting ways of causing trouble Or, as she no doubt sees it, she was simply exercising her rights as proper owner of all things edible. It must have been this line of thinking that lead her to the closed bread drawer.

Our bread drawer, like most I’ve seen, is large, deep, and contains a sliding plastic top that keeps the bread fresh, and the dog noses out. Actually I always just assumed that the sliding cover was a dog-nose barrier. I suppose it’s possible that the original designer of the bread drawer didn’t have psychotic Landseer Newfoundland dogs with a penchant for theft in their house, but seriously, what are the odds of that? Either way, the sliding cover has always kept long wet noses out of the bread. That is, until now.

Good bagels should be eaten the day they’re made. Don’t argue with me here, because I just won’t listen. Don’t freeze them, don’t eat them the next day, and don’t put them in the bread drawer. If they’re still around the next day, give them to the dogs, go back to the deli and get new ones. Bagels should always be fresh, unless they’re those icky chewy super-market bagels in a bag, in which case do with them what you will. In our case, we stuff the bag into the bread drawer. Hey – I don’t eat the damn things!  They’re for the kids who like them in their school lunches.

Now to open the bread drawer, thumbs are recommended, but as we’ve now learned, not required. The idea of pulling a knob to open a drawer doesn’t strike me as something that Annie would discover on her own. Even if she could open the drawer, the act of sliding the plastic lid back seems even more unlikely. As usual though, things don’t progress they way I expect them too with Annie around.

My assumption is that part of the bagel bag must have been left sticking out of the drawer. I could then further suppose that Annie grabbed the bag with her pointy ferret teeth, then pulled, which would slide the drawer out.  If she then managed to pull upwards, the bag, already half exposed, might have slid the plastic top back allowing the bagel bag’s extraction. It’s also possible that the kids left the sliding top open, thereby eliminating one of two complicated steps necessary for bagel pilfering. Naturally both children deny any wrong-doing.

The end result, of course, was that Annie ate an entire bag of little substandard supermarket bagels. I did not weep for their loss. The message I received from Lauren shortly after the bagel incident stated simply:

Couldn’t get into the trash, so she opened the bread drawer.

Now she’s laying on the floor like a lump.

I tried to explain to Annie the merits of enjoying a single delicious hand-made bagel as opposed to eating an entire bag of imitation mini-bagel dough-rings. She didn’t seem very interested though. Annie processed her carb overload, and lived to garbage pick another day. If there’s a bright side, I guess we’re lucky that she didn’t eat the plastic bag.