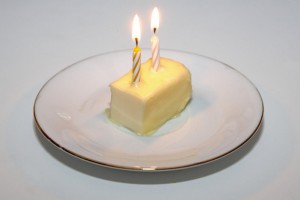 Annie turned two years old on Wednesday. Many people will tell you that a Newf is fully grown at the age of two. That may be true physically, but I’m here to tell you that the age of two is not the pinnacle of emotional development for a Landseer Newfoundland Ferret-Dog. If I had to venture a guess based on recent behavior, I’d say that 34 might be the age of enlightenment.

Annie is now very much a teenager. She understands the rules, but she can’t be bothered to obey them. She doesn’t grab every piece of underwear from the hamper like she used to, but she will grab a pair if she’s feeling spunky and ignored. She is no longer a rampaging menace in our house, but has grown into more of a patient, conniving menace. You know, like a dragon. The moment she starts hoarding treasure, my suspicions will be confirmed, but until then I’ll be keeping a careful eye on our suspected Draco Canis Ferritus. At any rate, we needed to celebrate the second anniversary of the she-beast’s hatching, and like any good celebration, ours centered around cupcakes.After learning that I had forgotten to buy Annie her birthday cupcakes, I asked the girls what she might enjoy instead. I honestly don’t remember being assigned the task of cupcake gathering, but then I’m just the dumb ol’ man in the house, and I hardly listen worth a damn anyway, so it wasn’t much of a surprise to anyone involved that I forgot to get them. Meghan suggested that Annie would enjoy having butter instead of cupcakes. We all agreed, so Lauren got to work making the perfect birthday-butter surprise. 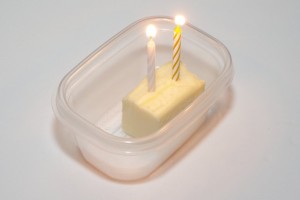 Lauren put some butter in a small container, slapped in some candles, and the party was ready to begin. Of course I had to interrupt the festivities in order to properly document the event, but I can’t help who I am.

Actually that doesn’t even closely reflect who I am. If you want a real measure of the depth of my madness, consider this: not only did I feel the need to photograph the candle-laden butter, I also had to do a complete re-shoot with a china saucer the next day. Why? The image of the butter in a tub did not properly reflect my artistic vision. We artists are a peculiar bunch, and we’ll go to great lengths to fulfill our visions. Either that or I’m mentally ill – both conclusions are equally plausible given the evidence offered.

We blew out the candles for Annie, mostly because no matter how much we tried, we couldn’t get either of the dogs to make the “O” shape with their big droopy lips. That, and we worried that Annie would eat the candles while they were still lit, which as we would later see, was a valid concern. While Colleen held the butter treat for Annie, Lauren occupied Guinness by feeding him Snausages. Guinness was pretty sure that Annie was getting something wonderful, and he really wanted to go take it from her, but Mommy kept feeding him Snausages. His head swinging back and forth from Annie to Mommy would have been comical if not for the drool he was slinging all over himself.

Within seconds, Annie had consumed the butter and the party was over. It was only a half-stick, so she made pretty quick work of it. I lost count of how many Snausages Guinness got, and he finally stopped drooling about 36 hours later. Annie didn’t play with her new toy, and she wasn’t impressed by her pretty new collar. She really just wanted more butter.

The next day, when I decided to re-shoot the butter scene using vision-inspiring fine china, I also decided to use my white foam board as a back drop. These boards are only a couple of dollars at any office supply store, so it’s not like they’re expensive, but I try to get as much use from them as possible. Luckily I assumed Annie would destroy this one because… well… she did. 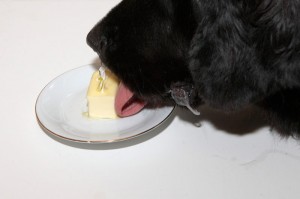 I carefully situated the butter on the plate, put the plate on the foam board, lit the candles and took my pictures. I then put the entire thing on the floor with the candles lit, which looking back, was a mistake. Dragon-spawned ferret-dogs apparently do not have an instinctive fear of fire – at least not where butter is concerned. Lauren jumped in and held Annie back while I blew out the candles. I managed to get one shot before the butter was gone. I swear she picked it up and squished it between her tongue and the roof of her mouth while moaning in delight which, for the record, was not a sound I particularly enjoyed. When she was done, there was nothing left but the plate and a candle.

Now if you’re clever with math like I am, you will have noticed that we started with two candles, yet ended up with one. Here’s where all those years of school pay off, because yes, we were now missing one candle. I’ll save you the unnecessary suspense: Annie ate the other one. My foam board was ruined, the butter was gone, there was drool everywhere and one of the candles was missing. I guess we should have been thankful that she didn’t eat the plate. Good thing we blew out the candles! 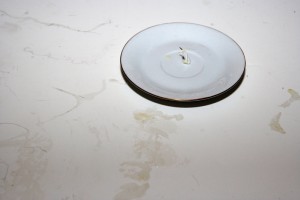 Luckily I had cut the candles in half to make them look better in the photo. You see the ratio of the candle height to the width of the butter just didn’t look right, so I had to cut the candles down to a more visually appealing size. Vision! Coupled with the fact that the candles melted a bit during the shoot, we can conclude that she really only ate about a quarter of a candle. She’s consumed far worse things.

If you’ve ever wondered what it’s like to live in our house, consider that not only did we give our dog butter for her birthday, but I also cut the candles to fit said butter before photographing it for our dog’s birthday – twice.

So once again, Annie got the butter, but this time it was OK because it was her birthday, or her hatchday, or whatever you call the anniversary of ferret-dogs she-beasts coming into this world. Maybe to avoid confusion we should just yell “Happy Butterday!”

4 thoughts on “Annie and the Butter – Part III”