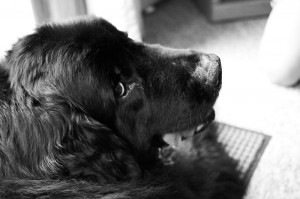 Once again the scary ball of fire hung in the sky, confusing those of us who had previously known only darkness and rain. First thing in the morning I took Guinness outside, but the moment I got him down the stairs, he tried to bolt for the van. Seeing as how I controlled his rear legs with the beach towel sling around his belly, he could steer but had little traction. He slowly pulled me to the van and then sat there, pawing at the door. The poor boy was done with New Hampshire. He just wanted to go back home where good dogs weren’t given away. He was breaking my heart.

With no Internet, I was feeling frustrated because I couldn’t research a better solution than the beach towel sling. Big ol’ male dogs like to lift their legs when they pee, and this poor boy could barely squat. Nature always wins though, and when he finally relieved himself, Lauren and I cheered with joy. It’s amazing how much you can appreciate a dog performing the most basic of biological functions when there’s a problem. The minute he was done, he tried to pull me back to the van. I tried to explain to him that we were going back inside, but conversations with Guinness are generally pretty one-sided. Usually his side is comprised of I love you and kisses, though I think this time his side would have been I want to go home now – and I love you (with kisses).

We had solved his eating disorder with a generous application of fast food (a far cry from his normal Orijen diet), and we had decided that bringing him back and forth to my mother’s house was too much for both him and us. We decided that we would leave the dogs at the rental house while we went out and tried to let the kids have some fun. We made a point to limit our activities to four or five hours so that we could come back and check on the dogs throughout the day. 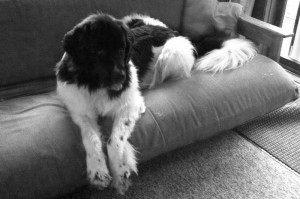 When we got back inside, Guinness tried to get upstairs again, presumably to hide in his fortress of solitude at the top of the stairs. I rebuilt his beach towel cave for him which he grudgingly accepted as a poor substitute for the seclusion he really wanted. Annie decided that if she was going to be left in the rental house, then she was going to make the most of it and jumped up on the futon. I didn’t have the heart to tell her to get off, and she knew it.

We took the kids to a fabulous water park, but we wanted to wait until noon when the rates went down. While we waited a ridiculously long time for our late lunch across the street, Meghan obsessed about the the park. Meghan is, for lack of a more technical description, a water rat. She would swim at the beach during a snowstorm if we’d let her. She loves the water, loves water rides, and doesn’t seem to understand how anyone else wouldn’t also like to swim when the penguins huddle together for warmth. 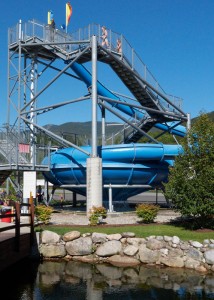 Meghan told us probably thirty times how she was going to ride The Vortex first. The Vortex is a water slide with a steep four story drop through a tube that deposits the rider into a large funnel-shaped enclosure. The terrified rider is then injected  into the spinning vortex of water at a high rate of speed where the centrifugal force threatens to rob the now disoriented fool of consciousness while the rushing water simultaneously works to render said rider unclothed. Just as the eager new student of physics manages to gather their wits and contemplate the wisdom of their decision to ride, they are unceremoniously deposited from the bottom of The Vortex into a shallow pool where they are instructed to move on quickly lest the next idiot be deprived of the indignity of high-speed flushing. Naturally, I nicknamed this ride The Toilet.

Immediately after we entered the park, we followed Meghan to The Toilet. She eagerly climbed the multi-story structure, waved to us, and then she was gone. Roughly one tenth of a second later she was ejected from the ride and walked like a drunken eleven-year-old back to where we stood. As she stood before us shivering in the cold New Hampshire air, she said sheepishly, “I didn’t like it.”

I couldn’t blame her. 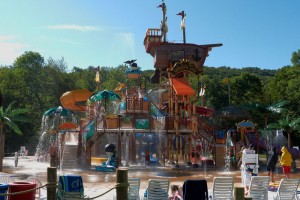 I gave her a hug and we told her how brave she was to have ridden such a ride. I freely admitted to her that there was no way I would get in that thing, and that made her officially braver than Daddy, at least for that day. Meghan and Colleen then spent the next hour or so in the kid’s section of the park which was so well designed that it made me wish I was ten again. After that, Meghan wanted to try another water slide, and Colleen wanted to get warm because honestly, it was too damn cold to be at a water park. Meghan rode on the water slide continuously while the rest of us watched. After Lauren rode with her and seemed to enjoy herself, I decided to ride with Meghan once. In retrospect, this was mistake.

A ten year old girl riding on an inner-tube through a water slide does not gather much momentum. A ten year old girl riding on a two-person tube with a 45-year-old 240 pound idiot achieves significantly greater speed through the blue half-tube of death. As the addition of my weight aided in our acceleration from the ridiculously high perch atop the slide, I started to wonder what the weight limit was for the ride. I made a mental note that if I were to survive, I would need to check on that. More than once I was certain that we broke the sound barrier as my Whoopie-Pie-eating ass seemed to escape the confines of the ride, splashing everyone below as the tortured steel support pylons screamed in an attempt to keep the ride from ripping apart. I prayed to the gods of metallurgy as we rocketed through the turns, swearing that if the ride held together this one last time, that I would never submit such undue stress on a man-made structure again. Meghan, blissfully unaware of the increased gravitational impact of my Whoppie Pie laden buttocks, screamed with glee as we were thrown from the ride into the pool at the end. I couldn’t be sure, but I thought I felt the impact of the sonic boom pass over us as we struggled to emerge from the cold water which had engulfed us.

Colleen and I then retired to the hot tubs, which was were where we should have been the entire time. As Meghan rode the tube ride of doom 136 more times, Colleen and I luxuriated in the swirling pool of heated wet chlorine. Just as we both decided that we were cooked, the park closed and we had to leave. The only way that we could convince Meghan to get off the ride was to remind her that we had bought a two day pass. With the promise of returning the next day, we headed back to the car where we sat stunned for a good long while. We had actually had fun. Fun in the sun! Sure it had been too cold for normal people to be at a water park, and I was certain that the maintenance crew would be up all night realigning the ride I had probably bent, but dammit, we had enjoyed some vacation-level physical fun for the first time all week. Things were looking up.

We drove back to the rental house in order to check on the dogs. Guinness was much better, and was even able to walk down the stairs with minimal aid. I was happy to see him at least a little better, but he was obviously still unable to put any serious weight on his hind legs. After dinner of lobster roles and seriously delicious cheeseburgers from the road side stand, we brought the dogs their Burger King feast. Once again Guinness made us proud by eating his two cheeseburgers. 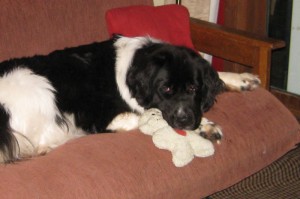 After we fed the dogs, took them out and came back inside, Guinness crawled into his beach towel cave. Annie, in typical second-child fashion, claimed the futon as her special place. She grabbed a baby, hopped up on the couch, and settled in for the night. I guess she had decided to make the best of the situation. Who was I to tell her that she was wrong?

It was starting to look like our Vacation might not be a total loss after all. We had one full day left, and it looked like it was to be sunny and warm. We had tickets for the water-park again, and I had a plan brewing that would turn this rainy week into the best vacation ever. Clark W. Griswold had nothing on me. If only I could get Lauren to call me Sparky.