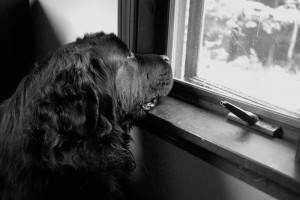 For the first time in nearly 600 years, it wasn’t raining when we woke up. The cool New Hampshire air gave way to warm New Hampshire air, while we all recoiled in fear from the scary new ball of fire floating in the sky. Our vacation of doom was coming to an end as the future promised three days of unrelenting sunshine, white puffy clouds and an endless supply of Whoopie Pies.

We decided that on this, the end of monsoon season, we would take advantage of our free tickets (thanks Grandma!), and take a ride on the M/S Mt. Washington, a large passenger ship that sails on Lake Winnipesaukee in New Hampshire. This ship has been sailing in one form or another since 1872 when it was a side-wheeler paddle boat. For as long as I’ve been going to New Hampshire, I’ve been riding on the Mt. Washington, and given the fact that I collected coins during this country’s bicentennial celebrations, that’s a long time. 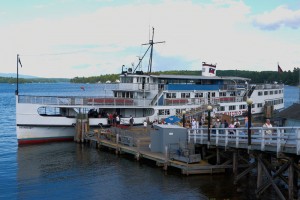 After our three hour cruise, we decided to play some mini-golf. Mini-golf is a fun way to spend the afternoon, especially if you’re part of a family comprised of overly competitive, wise-cracking cheaters. Colleen and I both got holes-in-one, and Meghan got a technical hole-in-one, whatever that means. We had a lot of fun playing mini golf, even if Lauren did cheat. Lauren kept score, and Lauren won, and that’s all I’m going to say about that.

As the week progressed, I started to formulate what I would write for the first day’s blog entry about our trip. I knew that I wanted to write about Whoopie Pies, so I needed some research materials. I bought two Whoopie Pies from the local food mart and brought them back to my mom’s house to photograph. They only had Whoopie Pies with with mint filling because some New Jersey tourist had eaten all the regular ones. I spent a good portion of time on my vacation photoshopping a mint Whoopie Pie to look like a normal Whoopie Pie. Naturally I had to polish the overall look and remove the finger dents too. Do I know how to relax or what? 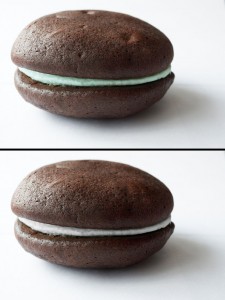 After we got back to Grandma’s, we took the puppies for their afternoon walks. Guinness, seasoned zombie hunter and all around bad-ass, was sniffing along the driveway as dogs are wont to do, when he happened upon a plastic goose. My mother is fond of plastic geese, and this little fellow sits at the end of her driveway to let visitor’s know that my mother’s house has been found. As brave Guinness stretched his neck out to sniff the plastic critter, the critter became dislodged and fell. The resulting hollow thonk of the goose falling on the driveway so terrified brave Sir Guinness that he spun around and bolted for the safety of the house. Well, that’s what he wanted to do anyway. In reality he spun around, his good leg twisting in an effort to support his bad leg, and that’s when it all went horribly wrong.

As Guinness lay in the driveway, we all went over and told him it would be alright. He thumped his tail, either happy for the attention, or relieved that he had escaped the attack of the vicious plastic goose. He seemed happy enough, but that didn’t hide the fact that he was unable to stand.

When we had taken Guinness in to see the vet about his limpy leg, we learned that he had a ruptured Anterior Cruciate Ligament (ACL). I had the same problem some 15 years earlier, and I felt his pain. We had decided to schedule the surgery after vacation in he hopes that the trip would be less stressful on him. The vet warned us that we should schedule him for surgery as soon as possible or risk him hurting his good leg. We should have listened. We were now 400 miles from home with a 140 pound dog that wanted to go back home, hadn’t eaten for five days, and suddenly couldn’t walk. At least it had stopped raining.

We got Guinness to stand up, and 30 minutes later managed to get him up the three stairs on Grandma’s porch and into her house. After spending a half hour getting Guinness inside, I came to the conclusion that we should just pack up and go home. Having a giant breed dog without functioning rear legs didn’t sound like fun to me, and I’m sure it didn’t sound like fun to Guinness either. The poor guy was already stressed about being away from home, and now he was functionally immobile.

Lauren decided to go out and get lobster rolls from a local roadside stand, and on the way back picked up cheeseburgers at Burger King for the dogs. Guinness may have been a stubborn boy for the first five days, but his willpower was no match for the fragrant aroma of assembly line psuedo-meat. Two cheeseburgers later, we felt relief as the big guy finally had consumed some protein after five days on his strict pizza-crust and water diet. With one problem solved, there was much rejoicing.

In order to get the big guy back into the minivan, I parked it such that the sliding door opened onto a hump in the yard, thus diminishing the distance between the ground and the floor of the van. This helped a bit, and after spending a half hour to get him over to the van, it took us another twenty minutes to get him actually into it. Once we got him back to the rental house, we realized that we had a bigger problem: we couldn’t get him out.

I sat outside with Guinness in an effort to get him out of the van. I brought my suitcase out and put a car mat on it to make a step. I found another hump and backed up the van so that he could easily get out. The distance to the ground wasn’t the problem. The problem was that Guinness wouldn’t even stand on his hind legs. It was now past 10:00pm,  our Guinness had two ruined legs, wouldn’t get out of the van, and had yet to pee. The night was young, but at least it wasn’t raining. 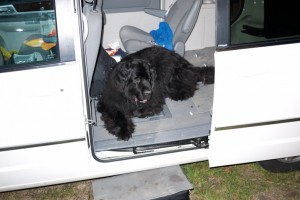 I finally reasoned that if he couldn’t put weight on his hind legs, then I needed to somehow relieve the weight from his legs if I was going to get him to walk. I remembered a post on Newf-Net where someone had faced a similar challenge, and went inside to get a beach towel.

Wrapping the beach towel around his belly, I coaxed Guinness first to stand, then as he became more comfortable with me pulling up his hips with the towel, to walk. With me offering support to for his back end, Guinness learned that he could walk, and I got him out of the van. A full hour after we had arrived, I managed to get him up the three stairs into the rental house. He plopped himself on the floor just inside the door, where Lauren and I heaped praise on him. He still hadn’t relieved himself, but all he wanted was to be inside with us. If he had an accident we would clean him up, and we told him that he was a good boy no matter what happened. He seemed OK with the situation given the circumstances.

Guinness was inside, his ordeal had been long, and he was in no mood to deal with the likes of Annie. The she-beast, who couldn’t help being herself, walked up to sniff him. The moment she was in range, Guinness leapt up on his front legs snapping and snarling at her. Annie, who has always been too smart for her own good, knew that he was hurt, and knew that his range was now limited. Feeling a healthy sense of youth-filled bravata, she stood her ground.

Guinness was the alpha dog in the house, and Annie was, well… not. As Annie grew in size, her position in the pack apparently became worthy of question, and as soon as Guinness was physically unable to maintain his place, she refused to put up with his I’m the Alpha and you must obey crap. Guinness, who felt that he needed to up the attitude in order to compensate for his newfound physical weakness, looked like a demon escaped from Hell as he snarled and snapped at Annie.

This sort of position juggling usually works itself out in short order, though for the uninitiated, it can look terrifying. While the conflict is usually just posturing, it only takes a second for it to escalate to real violence, and with Annie on a power trip and Guinness feeling defensive, we had the potential for a problem on our hands. 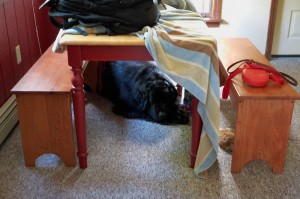 We had learned through previous encounters that Guinness likes to guard doors. If he is in front of a door, Annie is not allowed to go near it. Not only was Guinness feeling wounded, he was laying in front of the door. I pulled Annie away from Guinness and put her in the other room. Trying hard to remember some dog psychology, I grabbed some beach towels and draped them over the dining room table, making a dark cave in which Guinness could hide. I figured that dogs are den animals, and that the wounded boy needed a den in which to feel safe.

As soon as I made the little cave, Guinness sat up, pulled him self over, and crawled inside. He was safe, hidden, and content. As soon as he was out of sight in his makeshift den, Annie left him alone and peace was restored. Hallelujah. I pulled aside the towel to take a picture, then left him to hide in peace.

Finally, at around midnight, Lauren and I get ready for bed. As soon as we got into bed we heard a noise, but this time I knew there were no aliens in the attic. Guinness, eager to sleep with the pack, had picked himself up, hobbled all the way across the house into the bedroom, turned around and plopped down on his bed where he stayed the entire night. 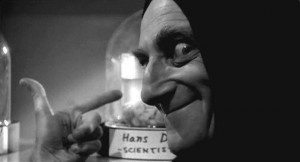 As I lay in bed pondering the day’s events,  Guinness snored nearby. I had no idea how we would continue the week with such a large dog who basically needed to be carried everywhere. I supposed that all things being equal though, it could have been worse. It could have been raining.
More about: [ Guild Guitars ][ Dogs ][ Cozy Tales ][ Ferret-Dog ]