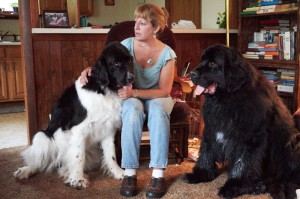 Somehow, Lauren and I came to the conclusion that driving two giant dogs, two kids and ourselves almost 400 miles to visit my mother in New Hampshire was a good idea. My mother only knew of Annie through pictures and from the tales spun here in this very blog. As you might imagine, she was a bit nervous about the whole thing, but from my point of view, she had the easy job. She didn’t have to share a vehicle with three hundred pounds of dog, a family of four and all the luggage required for their seven day adventure.

Transporting two Newfoundland dogs and four people, along with all their stuff, is not the job of our normal vehicles. For this reason, we decided to rent a minivan. Lauren has refused to own a minivan citing the fact that she’s still 23 and doesn’t want to look like a 40-something mother of two kids with two dogs who desperately needs a utilitarian vehicle to accomplish even the simplest of transportation duties. So instead of the archetypal soccer-mom transportation, we bought her an SUV. For this trip though, given our requirements and the fact that Guinness still had a limpy leg, we rented a Chrysler Town and Country minivan for our eight hour jaunt to New Hampshire. The kids loved it, mostly because of the space-age automatic sliding doors. It wasn’t the Ferrari of my dreams, but it got the job done. 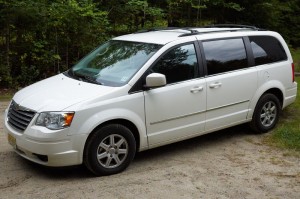 Our drive up was relatively uneventful, though it was logistically problematic. Guinness has an absolute hatred for any vehicle with two wheels. While bicycles aren’t a particular problem on our nation’s highways, the occasional motorcycle does appear. At the first sound of an approaching bike, Guinness would start to bark. Once the offending motorcycle came come into sight, he would bark ferociously at the windows in the mini-van, Annie barking with him for support. The sound inside the enclosed space was deafening, but at least Lauren and I got to sit in the front seat. Since the kids sat with their backs to the demarcation point between dogs and humans, they got a fair amount of drool slung on them during these episodes of motorcycle-induced fury.

Since we couldn’t exactly bring the dogs into gas-station convenience stores with us, we would have to rotate shifts in and out of the minivan. Every time we opened the doors, both dogs thought it was adventure time and tried to break through the barrier we had set up to keep them in the back. Thankfully it worked, and they were only able to get out of the van from the back gate when we let them. With a push of a button on the rental-car key fob, three hundred pounds of dog would come spilling out of the back of the minivan before the door was open wide enough to let a cat out. Hooray for technology!

At one of our regular stops in Massachussets along I-495, we piled out in shifts for some gas, potty breaks and to walk around the convenience store in the gas station. There, in the rack, I noticed the distinctive shape of New England’s greatest culinary treasure. These delectable treats, which I’ve only ever seen north of Connecticut, are the tastiest things on God’s green earth (which, if you didn’t know, is actually mostly blue). They may also be about the most unhealthy food item you could possibly put in your mouth, but for me, all sensibility is lost when I spy them, for they are a rare treat indeed, especially in New Jersey. I am referring, of course, to the delectable Whoopie-Pie. 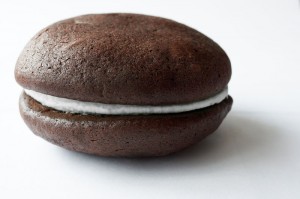 For those not from ’round these parts, a Whoopie Pie is what you might call a home-made devil dog, but I assure you, devil dogs with their factory-made cake with factory-made imitation cream filling are a cheep substitution for the real thing. Whoopie Pies are about four-to-five inches in diameter, round, and look like flying saucers. I’m pretty sure the only ingredients are chocolate, sugar and lard, but I’ve never been brave enough to look. They could be made with grass clippings and horse manure for all I care since, whatever the ingredients, they are delicious. The girls and I shared our Whoopie Pie while Lauren looked on, shaking her head in dismay that we could enjoy six meals worth of calories in one snack. I assure you that we did, and the kids learned a valuable lesson, which is: always buy a Whoopie Pie when you see one, for you’ll never know when you will find another. Sage wisdom.

After one Whoopie Pie and eight hours of close-knit family bonding inside the confines of America’s finest dog transportation vehicle, we arrived at Grandma’s house. Grandma loved on the kids, loved on us, and watched in abject horror as three hundred pounds of ill-behaved dog poured into her 800 square-foot house. The dogs trotted around, sniffing everything in sight, all the while drooling and wondering what the Hell was going on. After a couple of hours of family time, Lauren and I left to go have some quality alone time in our rental house. We brought the dogs with us, but left the kids in Grandma’s capable hands. 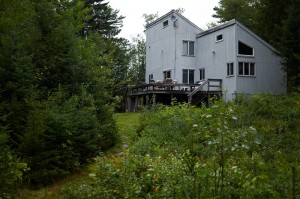 The rental house was remote, and by remote, I mean in the middle of friggen’ nowhere. When you drive on a dangerously curvy mountainous road for ten minutes and don’t see another house, let alone another car, you’re in the middle of nowhere. Another indication of remoteness in the extreme northeast are the “Moose Crossing – Next Two Miles” signs. This house was a mile past that sign. While the remoteness might have been soothing, there were some unexpected features for which we were not prepared.

No Internet. OK, no problem. I’ll just use my iPhone.

I guess I’ll figure out a way to dial up using my modem. No long distance phone calls allowed from the house phone.

Neither Lauren nor I have had a calling card in 15 years. Not only could we not connect with the rest of the world in the way we were accustomed, we had not even thought to give my mother the phone number of the house. Not smart, but who would have thought that there where still places on Earth without Internet or long distance phone service? Not me.

I’m a nerd, and I need my technology. I was amazed though, at how much I really disliked being disconnected. More than that though, I was downright pissed that I couldn’t connect with my kids using even a basic telephone. I went from zero to cranky bastard in sixty seconds. Just as I was trying to reconcile my Internet addiction with the fact that I was in nerd Hell, Annie put the icing on our day by taking a nice healthy crap in the middle of the living room floor. That’s my girl.

Not only was I pissed off at not having my beloved connectivity and being unable to so much as call my kids, but now our rental house smelled like an army latrine on a hot summer’s day in the jungles of Cambodia. Lauren, who was responsible for our choice of rental house (I had opted for the comparatively opulent pet-friendly hotel with free wireless Internet 25 miles closer to civilization), tried to lighten the mood by reporting the following bit of information while she cleaned it up, “At least it’s firm. Good thing they’re on a grain-free diet!”. I hunted for deodorizing spray while fighting off the urge to vomit at 11:30 PM on our first night in New Hampshire.

10 thoughts on “Vacation with Two Newfs – Day One”