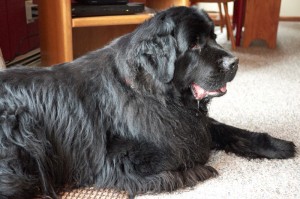 After the excitement of our arrival, we were prepared for anything on our first day of vacation. Well, anything except for continued rain. Naturally, it rained – a lot.

Miraculously, we were not abducted by aliens in the night. New Hampshire has a rich and storied history of alien abduction, and I imagine it’s because there no friggin’ cell, Internet or long distance phone service. The aliens know that you couldn’t even send a text message for help, so the deep woods make for ripe picking of human probing subjects. I credit the dogs with our lack of midnight probing that first night. The way I see it, even interstellar travellers would not want to deal with Annie nudging their arms, or tentacles, or whatever it is they use while operating the probulator. Annie got extra head pats from me that morning while I thanked her for keeping the pesky aliens at bay.

Since it was not a beautiful sunny day, we decided to leave the dogs at the rental house while we went to Grandma’s to retrieve the girls. Neither of them liked it one bit, and it started to dawn on us that both Annie and Guinness were rescue dogs. Being rescues, the last time either of them went on a long car ride to a new house, their old families left them there. Guinness, especially, was a neurotic mess. When we took him outside, he would bolt for the minivan and try desperately to get in. All he wanted out of life was to go home. He seemed to be begging us to take him home with us. His eyes said it all: Please don’t leave me here in the woods of New Hampshire where the aliens ran free – please! Poor guy.

Annie took it all with a little more grace, if you could call anything Annie did graceful. She was only five months old when we got her, so we figured that she didn’t remember being given away like Guinness did. Guinness still didn’t eat that morning, but Annie did, and when Annie tried to get to the big guy’s uneaten breakfast, well let’s just say he didn’t take kindly to the intrusion. We were only going to go to my Mom’s for a few hours, so we left them, hoping we wouldn’t have to buy a new interior for the rental house when we got back. 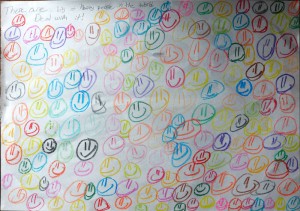 When we got to Grandma’s house, the girls were busy learning how to crochet. The were making long strands with yarn while Grandma made them each an iPod cozy. While settling in, I found a picture that Meghan had drawn. I could instantly tell it was Meghan’s handiwork because she is the most perpetually happy person I’ve ever met. The drawing was comprised of hundreds of colorful smily faces with the simple caption There are lots of happy people in the world. Deal with it! While she wouldn’t admit it, I imagine that her drawing was meant for me. I often joke that people with constantly upbeat attitude annoy me. I can be a cranky old nerd, and my Meghan wouldn’t let that stand in her way on the road to happiness. That’s my Meghan. 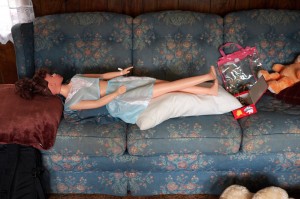 Colleen spent the morning playing with a doll that my mother found somewhere. At almost four feet tall, Hannah was Colleen’s constant companion for the week, and had to endure various hair styles, clothing changes and numerous painful-looking gymnastic poses until finally her leg popped right out of her hip. She never did walk the same after that, a fact for which Colleen seemed to have little sympathy.

After a couple of hours we packed the kids up into the van and headed back to our rental house deep in the heart of New Hampshire’s alien-infested mountains. With almost three hundred pounds of neurotic dog in the house unattended for the past few hours, we naturally expected the worst. We were pleasantly surprised to find both dogs intact, the house unharmed, and no aliens playing chess in the living room. 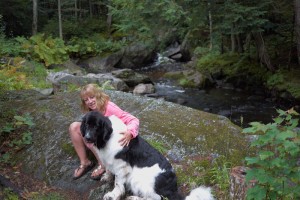 The rental house, was actually pretty nice, even if it was devoid of creature comforts like a 155 megabit OC3 high-speed Internet connection. We took the dogs and kids out for a walk and to see one of the waterfalls. The house had two waterfalls on the property, a beautiful stream, and even many walking trails. That day we only managed to see the closest waterfall where we tried to get Annie still long enough to take some pictures. As anyone with first-hand experience will tell you, Trying to keep a Newf out of the water can be a Herculean task. While the temptation was high to let them romp in the stream, we knew that we were taking them to Grandma’s house within the hour. It was bad enough that we were inflicting Annie on my mother. A wet smelly Annie was just not going to happen on my watch. After our little jaunt to the stream, we packed up the dogs into the minivan and left the rental house unattended so the aliens could set up the probulator in peace.

Back at Grandma’s house, the rain continued off and on, making the chances of doing anything outside pretty slim. Since it was an icky day, we decided to walk around Plymouth, a local college town. We decided to leave the dogs at Grandma’s house, which was easier said than done. You see, any time any of us even looked like we were packing up or heading for the door, both dogs would scramble to the door an an effort to go with us. If we wanted to go out without them, it would have to be done carefully.

We decided that we would stagger ourselves over a five minute period. First Lauren went outside. Then a minute or so later, Meghan nonchalantly got up and left. A minute later Colleen left, then I brought up the rear a minute after that. Neither dog so much as twitched an ear during our charade. I was pretty amused at how proud we all were as we drove off, knowing that we had been clever enough to outwit two dogs.

Plymouth wasn’t very exciting. The restaurant we were going to try was closed and we ended up eating at Subway. Normally we like to sample the local cuisine while on vacation, and fast food chains are generally not on the menu. There weren’t many options though, and we were all pretty hungry. All in all, the day was a bust. We decided to pack it in and go back to Grandma’s house in order to see how the dogs had behaved.

My mother reported that the dogs were fine for the duration of our jaunt to Pymouth. That is, until Annie started to release her inner ferret. About 1/2 hour before we got back, Annie started to pace. Annie doesn’t pace like a normal dog. No, Annie paces like a ferret. Annie needs to go through things, behind chairs, around televisions and anywhere else she can cause a problem. My mother had done her best to Annie-proof the house, but as she can now attest, there is no such thing as Annie proof. She didn’t break anything thankfully, but she did manage to knock something over that sounded like shattering glass when it fell. Annie, who had already been pacing, then became skittish at the crashing sound, apparently unable to make the connection that it was her own large body that had inflicted the damage. Lummox the ferret-dog strikes again.

Finally, my mother understood that all the Annie tales were not merely hyperbole. I believe the quote was along the lines of, “She really is just like a ferret!” I felt vindicated, for I’m sure my mother previously thought that all of Annie’s stories were nothing more that the product of my over-active imagination. That will teach her not to heed my warnings, entertaining though they might have been.

At the end of our decidedly unexciting day, we packed up the dogs and headed back to the house of 1,000 probings. Once again I was surprised to find that there was no saucer outside, no frightening surgical implements left behind and no bug-eyed aliens waiting for us. I guessed that they would come back when we were sleeping or something. It’s hard to second guess beings from another planet after all. 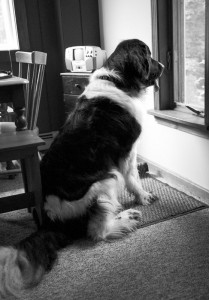 As we got ready for bed, Lauren went out to the minivan to get something. While she was outside, Annie started to pace, then to whine, until she finally discovered that she could see Lauren from one of the windows by the door. Annie then planted herself by the window and watched, whining the whole time. I managed to snap some pictures of her with my new camera while she stared. Apparently, Annie was not immune to Mommy abandonment neurosis after all. Either that or she was expecting Mommy to protect her from the aliens. I’d consider either scenario equally plausible.