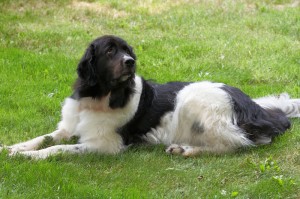 On our third day in New Hampshire, the sky finally cleared enough that we could venture outside without getting soaked. We took advantage of the opportunity and went to see the Castle in the Clouds. Once again we staggered ourselves so that the dogs wouldn’t figure out we were leaving them at Grandma’s. Once again, we proved ourselves smarter than our dogs, even if we weren’t yet smart enough to figure out a way to make Guinness eat. 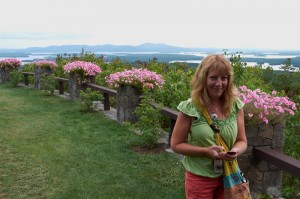 Castle in the Clouds is a wonderful place to visit on a clear or slightly overcast day. Unless you’re a nerd like me, in which case you spend time at such memorable landmarks by trying to figure out why my new camera doesn’t seem to have enough dynamic range. Gadget annoyances aside, the view from the Castle in the Clouds was breathtaking. I had been there many times before, but this was a trip that did us all some good after being locked up inside for the first two days of our vacation. Going to Subway can only be so entertaining after all.

On the way back to Grandma’s house we stopped at the Old Country Store in Moultonborough, NH. This old store has been a regular stop for me for as far back as I can remember. We always buy a wedge of cheese, some pickels from the barrel, assorted candy from the penny (now 2¢) candy display, and some toys or trinkets for the kids. There is also one other item that I must buy when I’m there: a pine-filled pillow. 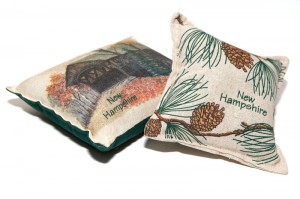 When I was a kid, my dad used to buy these pillows every year, at this very store during our summer vacations. For the next few months he would pick up the little pillow and sniff if deeply, the sense of longing for a house in the country clear on his face. Though my dad has been gone for almost twenty years, my mother still lives in that house in the country, and I still buy one of his favorite pine pillows. For me they don’t make me think of living in the country. No, the pillows I buy remind me of him.

The didn’t have the large pillow I wanted, so I had to settle for two smaller one. The smaller one’s weren’t as pretty as the bigger ones, and you know how we men like our pretty pillows. On the car ride home we feasted on pickles, sharp cheddar and Swedish Fish while the pillows made the car smell like a New England sawmill. We had to be home by 7:00pm so that we could meet my mother’s friend, Dr. Jeff, and his family.

One of Dr. Jeff’s, sons had indicated that he would love to have a Newfoundland dog, so like any good Newfy owner, we set out to prove him wrong. We spent an hour or so brushing both beasties, and making them look like dogs that didn’t drool 24 hours a day. Guinness was a good boy, like he normally is, and Annie was a pain in the ass, like she normally is. Still, we got them looking presentable and took them for one more walk before the guests arrived.

Dr. Jeff and his lovely wife arrived first, and we all hit it off from the start. The dogs got plenty of love, and when we broke out the pizza, the guests got plenty of drool. Guinness ate all the pizza crust we would give him, which was the first thing he’d eaten since we’d left New Jersey three days ago. We were all having a great time, and were looking forward to meeting Dr. Jeff’s two teenage boys, who were on their way from football practice. We were all excited to greet the boys when they arrived – everyone, that is, except Annie. 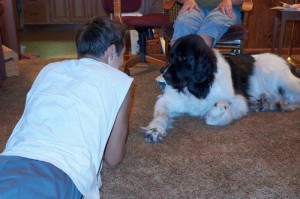 Annie immediately decided that she did not like one of the boys, which just so happened to be the one that wanted to someday own a Newf. She never growled, but she wuffed at him constantly, and never took her eyes off of him.

Annie didn’t bark her there are zombies in the woods bark, nor did she bark her happy let’s play! bark. If I had to categorize her bark, and you know I do, I’d say it was more of an I don’t think I trust you, so I’m going to keep an eye on you bark. It wasn’t even a bark really, but just a wuf.

When Annie sets off the warning for the the nightly New Jersey zombie invasion, she usually starts with a similar wuf. The purpose of the wuf, so far as I can tell, its purpose is merely to get Guinness, the bigger (and in Annie’s mind, no doubt, dumber) male dog to come up and do the serious barking. The usual dance goes something like this:

This night, though, there were no zombies, and the threat appeared real, if only to Annie. With a teenage boy in the house, the enemy was no longer at the gates – he was inside! Never mind that this teenager seemed only a threat to the remaining pizza. Annie needed to make sure he was being watched. Guinness though, he wasn’t so sure:

It felt like the katydids all over again (no she didn’t). Annie would wuf, then Guinness would wuf, and they would go back and forth, wuffing to each other ten or twenty times before stopping. All the while, Annie never took her eyes off of the zombie-boy in Grandma’s living room. Just as they’d get settled down, I would gently go wuf, and they would start up all over again. Hey, there’s not a lot to do in the woods of New Hampshire.

We never did figure out what Annie’s problem was. She was very well socialized as a puppy, and as such, was exposed to a wide variety of people, including teenage boys. We have no idea why she reacted this way, but I’d like to think that she just doesn’t like teenage boys. This way when our girls start dating, the boys of their choosing can be terrified of the dogs as well as the dad. I, for the record, am on board with this arrangement.