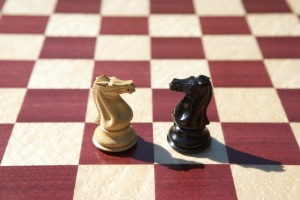 It’s official. Both of my daughters are chess prodigies. That is, of course, the only plausible explanation for the fact that they have now both beaten me.

It has been said that chess is life. I don’t know who said it, but I’m sure it’s been said. Heck, I just said it, so now it’s been said. Actually to be painfully accurate, it’s now been written, but rest assured, I said it just now for good measure.

If chess is life, and both of my pre-teen girls have beaten me at the game, then is it not therefore true that they have both beaten me at life? It sure feels that way.

Somewhere along the way, someone changed the rules on me. Somehow I’ve ended up in a universe where nine and ten-year-old girls beat their dads at chess. While I’m sure that’s great for them, the old man in this show is played by your’s truly, and he’s tired of getting his ass handed to him by prepubescent girls. It’s just not right!

In my world, women fawn over me and faint from excitement when I walk by. In my world, dogs named Annie live to serve, and fetch my slippers for me when I come home from a hard day’s work. In my world, Daddy always wins at chess. Always! In my world, I am a god among men, and every woman desires me, for I am GAD, Chess master extraordinaire. 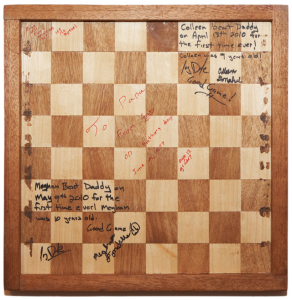 Of course Meghan got to sign the family chessboard, as is our custom. I told Meghan that she should enjoy this day, for beating your dad at chess for the first time only happens once. The memory should be cherished. What I didn’t tell her was that I too was cherishing the memory. You see, sometimes losing can make you happy. It doesn’t happen often, but when it does, it’s worth writing about.

In my world, women don’t fawn over me, my dog is criminally insane, I lose at chess a lot, and I am as mortal as the next guy. In my world though, I got to see the pure excitement in my young daughter’s eyes when she realized that she had beaten her Daddy at chess. That’s better than all that other stuff, although I wouldn’t mind having a dog with manners.

One thought on “My Other Daughter Beat Me at Chess”