I enjoy a good game of chess, but when I travel, I only play on the computer because most chess boards are too big to take with me when I travel. The problem with playing on the computer is that it’s just not the same as having a board with real pieces in front of you. Luckily, many companies make travel chess sets that cater to whiny traveling nerds like me. The problem is, they all suck.

Traveling chess sets generally fall into one of two camps: pegs and magnets. Either the pieces stick into little holes on the board, or they adhere to the board by way of magnets. The better sets generally use magnets as this allows felt to be placed on the bottom of the pieces allowing for a more traditional feel when moving pieces. Usually these sets fold in half to form a box that holds all the pieces.

You can also find small tournament style sets such as this one from chesshouse.com. The advantage of these sets is their size (only 14″ square) and the fact that the board roles up just like a tournament board. They therefore fit into my carry-on bag with ease. The disadvantages are that the pieces do not adhere to the board, and that the board is floppy. This makes them unsuitable for use on an airplane or while riding the log flume. 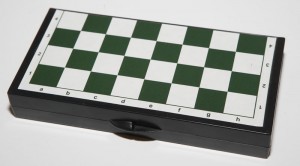 The folding box sets are cool and all, but they’re bulky. While they might be good for a vacation in the car, they’re not practical for business travel because they take up too much room in a carry-on suitcase. There are small versions of these boards such as the one shown here, which is only about eight inches square when open. It fits in a suitcase, but the pieces are so tiny that they can be hard to differentiate, especially for my addled brain. Also, since these sets fold such that the board is on the outside, they are subject to damage from the horrors of frequent travel. Still, so far as I could tell, the larger wooden versions were the best game in town. That is, until someone on chess.com recommended the sets at chessmate.com.

Chessmate.com sells a different kind of traveling chess board. They sell small magnetic boards that are designed for people like me who travel frequently. They sell tiny sets designed to fit in your pocket that use flat magnetic chess pieces, up to larger sets designed to be played like a real chess set. Actually that’s not a fair statement – the larger sets are real chess sets! 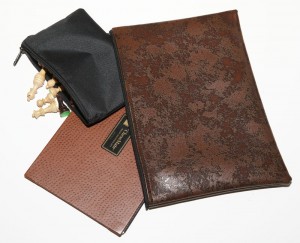 I was looking for a set to use both for online games and for studying chess openings, which I’ll sometimes do while sitting in boring hotel rooms. After looking at my options, I decided to order the TravelMate Deluxe set. This is Chessmate.com’s largest set with a two inch high king. That’s right the largest set they make has a two inch high king! They actually make a more expensive board called the TravelMate Ultra that costs 50% more, but I didn’t choose that one because I thought I’d like the green board on the Deluxe better. Additionally the Ultra only came with 1.75″ king whereas the Deluxe had a 2″ king.

The beauty of these sets is that there is no box. The board is a flat magnetic surface designed such that the board stays on the inside when folded. Brilliant! The outside of the folded board is a psuedo-leather material that just screams quality. The board even comes with a zippered pouch to protect it, and another zippered pouch for the pieces. More brilliance. As with most of the best ideas, this one is so simple, I wonder why no one else has done it before.

One of the things that is hard to convey is the size of the board. Because it has real pieces, I naturally assumed that the set was larger than it is. Sure the measurements of 10″ x 14″ should have clued me in, but a picture tells a better story, especially with a frame of reference. Here I’ve included my iPhone and a blank DVD for scale over the folded board. This is not a large set – nor is it small. It’s, well… perfectly sized for travel.

The pieces are much smaller than tournament pieces, but they’re not so small that you can’t tell what they are. The pieces are in the style of Staunton sets and even have felt covered bases. The picture to the right shows the entire set next to my Staunton Collector plastic tournament set (4″ king). I have big hands, and the small wooden pieces are wonderful to move. I’ve never seen a travel set that had such nice pieces. 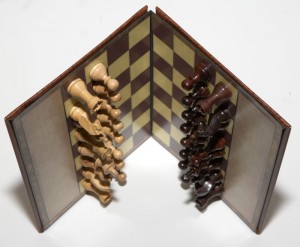 The magnets are strong enough that the pieces stay on when the board is inverted. They’re not rare-earth magnet strong, but they do the job. If I put the board on its side and bang the edge on the table, the pieces will slide, and we all know how much that happens during a game. If I experience so much turbulence on a plane that my pieces slide, I’ll likely be too busy praying or vomiting to care about my pieces moving, so this is a non-issue for me. Still, if you’re expecting to have to pry the pieces off of the board, you’ll need to look elsewhere, though I couldn’t tell you where. though maybe 10% more pull wouldn’t be a bad thing, personally I think they’re fine the way they are.

If you’re a clever observer you’ll notice that the board in my pictures is the Ultra board, and not the Deluxe that I said I ordered. That’s because the fine folks at Chessmate.com upgraded my board for free. Why? I have no idea. I imagine it’s because when I ordered they didn’t have any of the board I wanted and I had to wait a week while they made them. That’s right, they make all their boards right here in the US by hand. I actually thought that I’d prefer the green squares and square board of the Deluxe, but I have to say that the Ultimate’s extra area for captured pieces is a pretty good feature, especially if you enjoy playing on planes where retrieving a dropped item is a practical impossibility. Kudos to Chessmate.com for exemplary customer service. Now I have the nicer board, and the two inch pieces. I’m in traveling chess heaven. 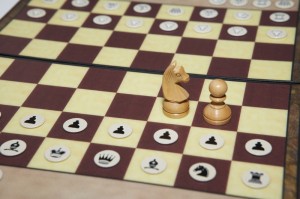 These sets also come with small disks containing standard chess symbols for use when you don’t want to lug the pieces around. There are two different models of these disks, referenced as  CM116 (included) and CM120 Ultra-flat (extra). The difference wasn’t obvious at first to me. Though the CM120 has a slightly patterned background on the face, the real difference is the magnets. The CM116 have smaller, but thicker magnets whereas the CM120 has wider but flatter magnets. With the CM120 set, you can fold the board up mid-game, then open it up where you left off. Pretty cool! I did find that if I slapped the board closed that some of the pieces would move, so remember that they’re not rare-earth magnet strong. 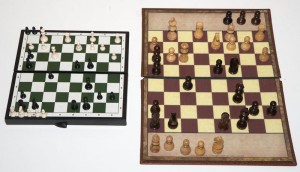 To say that I’m impressed with this set is an understatement. Contrasted with my daughter’s small folding chess set, there is no comparison. The pieces on the smaller set are hard for me to see, but the small set has one major advantage – I think we paid $11 for it in a retail store and I’ve seen them online for $6. The Chessmate.com Ultra board pictured sells for $149. That’s quite a difference, but for my money, I’d go with the Chessmate.com set. Looking at the same game side by side, the Chessmate.com set looks like a real chessboard whereas the other set looks like an $11 travel chess set.

If I had to list any areas for improvement, I would offer the following: 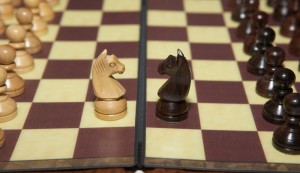 The board doesn’t lay completely flat. This is a very minor thing, and I’m not sure how it could be solved given the design, but if that sort of thing bothers you, be advised. You can see what I mean by in some of my images. It doesn’t impede play at all, but it’s noticeable to a perfectionist like me. Normally something like that would bug me to no end, but I found that I quickly got lost in the game because of the feel of being on a real chessboard. I also felt that this somehow gave the set more of a hand made feel to it. Something that’s sorely lacking in today’s mass-produced world. 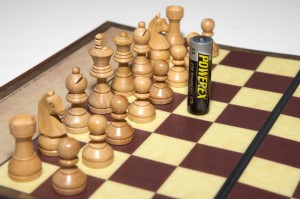 In a world where I seem to be constantly disappointed by supposedly high quality products, it is refreshing to get a great hand-made product from a US company that practices excellent customer service. Kudos to Chessmate.com for providing a rare impressive purchasing experience. If you’re in the market for a travel chess set, I highly recommend that you check out the sets from Chessmate.com.