Annie was curled up on the floor near Lauren as Lauren checked her email. Without a thought I went outside to get Annie’s crate so I could set it up in the bedroom. I pushed the button for the garage door opener and was startled by WOOF! WOOF! WOOFWOOFWOOFWOOFWOOFWOOF!!!!!!!

This girl has not made a sound except for a bit of a whimper, and out comes this bark! I’m impressed. I love a loud Newfie. I don’t care if they lick burglers and home invaders and other ne’er-do-wells, but I want my dogs to put the fear of God into anyone who tries to come inside.

We gave her heaps of praise after being flabbergasted.

Yup, it’s true, and it’s all because of Newf-Net.

It’s been two years since Cozy died, and just over a year since Daisy died. I told Lauren that I’d never be ready to have another dog. In fact when she asked me I pretty much became a sobbing mess.

Still, I don’t like the house without a dog, especially when I’m not here. We decided to look into Saint rescue, and we submitted an application online. Sadly we never heard back after repeated emails.

Lauren has a habit of trolling PetFinder and sending me links to dogs she deems worthy. She sends lots of links. 🙂 This time she read a post on NN and sent me a link.

For those of you who read the Rescue forum, you know about Annie from this thread, the 5-month old pup being fostered at the South Central Newfoundland Club. She sent me to the page, and told me to look at dog#29. As soon as I got to the page I saw a picture and thought “now THAT’s the dog we need in this house!”, then scrolled down to find dog #29. I found out days later, that the pic on the front that I liked so much *is* dog #29 – Annie. Here’s the pic. She’s the furry one. 🙂 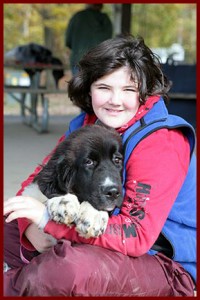 Lauren saw the posting, went to the website and (she swears) mistakenly sent a blank email to them. The responded immediately with a “did you mean to send a blank email?” and the conversation started.

We had to get a home inspection, and since we’re 11 hours away, we had to have someone local do it. Turns out we know the breeder well, and she came today to inspect us. We passed. We then took the kids to the breeder’s house to romp on the kitchen floor with her eight or so puppies, most of which go to their new homes this weekend. 🙂

The last email today started with you’re 100% approved. 🙂 We now have to get this pup from Indianapolis to NJ. 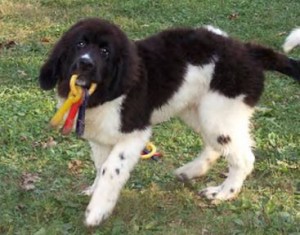 We know nothing about Ohio, and would like some input as to where to meet, where to stay and so-on. Any insight is greatly appreciated.

Lastly, the irony of Annie is not lost on us. I did not allow rescue posts for a long time on NN, though I did allow them from NCA recognized organizations such as SCNC. There were times that we considered not allowing any rescue postings at all. Annie, the NN mod, left in part because I changed the rules, and now this dog, also named Annie, is coming to us through a rescue posting on NN.

If not for NN, we would never have learned of Annie. I would also probably not have injured (possibly broken) one of my fingers while fixing the fence, but there’s nothing ironic about my stupidity. 🙂

We’re getting a new dog!

I loved the happy noise she made and called it “purring”. I  even recorded it a few times.

I wasn’t really scratching, and I wasn’t just rubbing, so I dubbed these special treats ear scritches. No one else seemed able to rub her ears just the right way, so when she wanted it done s