So Annie is keeping us busy. She’s still trying to figure out her place in the new house. She’s still not sure where she’s allowed to go, but she learns quickly. In fact some things she learns so quickly it’s frightning – especially when you consider this; if she can learn so quickly, then surely she knows what’s right, and often chooses to ignore it.

A case in point:

The little one, age seven, made herself a bagel with cream cheese. She, being seven, happily wandered off with the cream cheese still on the counter.

A few minutes later I happened to go upstairs where I discovered an empty cream cheese container on the living room floor. It was perfectly clean like we had used it for something else, which I thought was odd, because we don’t often do that. I pick it up, look at the counter, and quickly figure out what happened. Little miss counter-nose grabbed it and had a feast. When I looked at her, she slunk away with possibly the most guilty expression I’d ever seen. When I went towards her, she slunk into another room.

If she’s learned one thing early on, it’s that I’m the alpha male. She knew the alpha-male boomy voice saying “Bad Girl” was coming. She knew it was wrong, yet she did it anyway. Interestingly enough, she didn’t eat the jar of peanut butter on the other side of the counter left by the nine year-old. 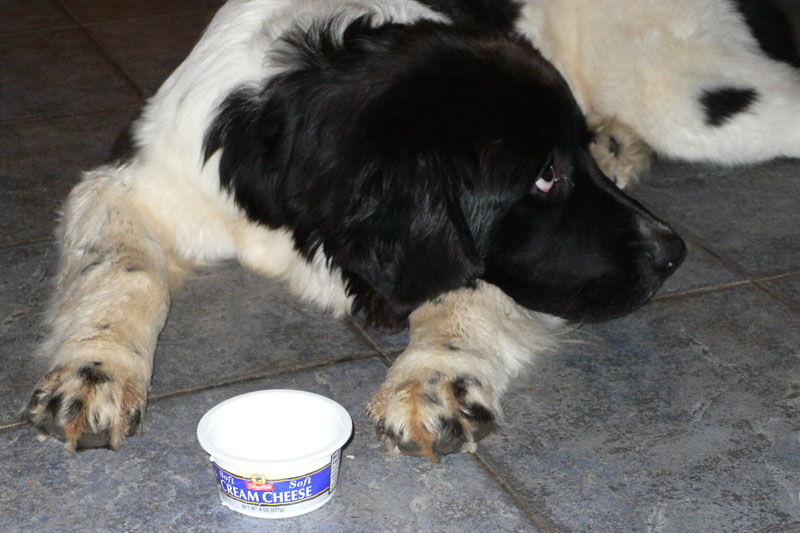 Annie doesn’t need nearly as much training as the two-legged variety it would seem.

After she got over her guilt, she discovered that the cream cheese container made the most WONDERFUL toy! When it was upside-down on the floor, she couldn’t quite pick it up, and every time she tried, it would bounce out of her mouth across the floor. She played with it for hours before we took it away afraid that she would cut the plastic. Made me remember Cozy playing with empty soda bottles at about this age.